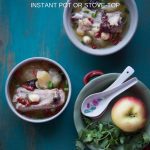 Delicious, easy, and nourishing apple pork ribs soup recipe with Chinese herbs are easily made with Instant Pot pressure cooker, slow cooker, or on the stove. 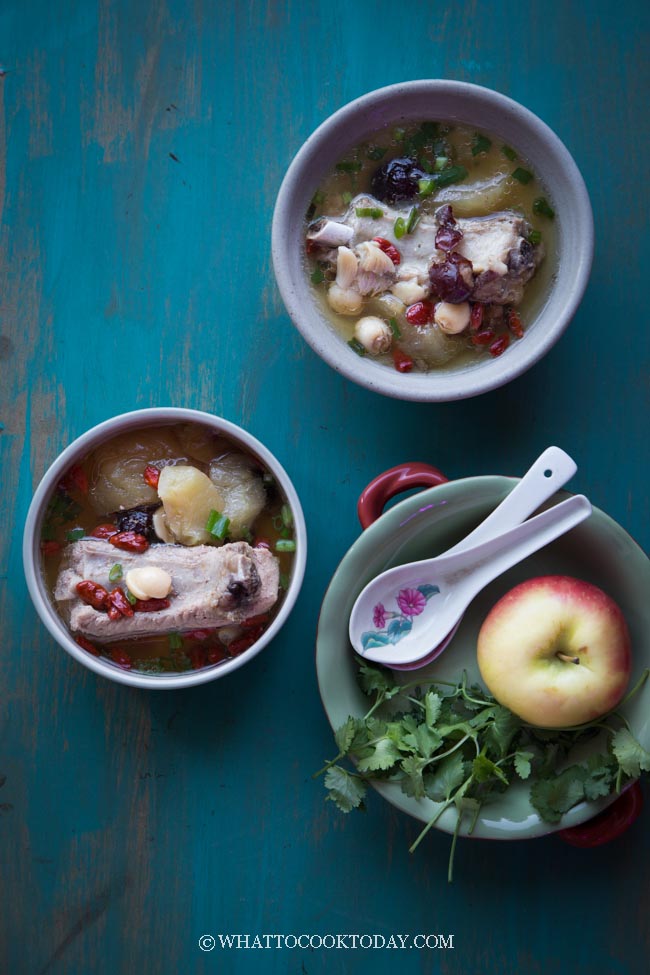 The Chinese believe that apple soup cooked with Chinese herbs is nourishing to the body. Like the popular saying that an apple a day keeps the doctor away. The apple also adds a natural sweetness to the soup. My mom made us this apple pork ribs soup pretty often when we were kids. My mom often said that this soup is good for nourishing the body and for getting rid of cough and cold.

1. PORK RIBS: I bought a slab of pork ribs and then separate into an individual rib. Choose the one with less fat if possible or you can trim off excess fat.
2. APPLE: You can use any apple you like. I have tried making these soup with several different kinds and I like them best with Honey Crisp or Fuji Apples.
3. GARLIC: Use fresh garlic if possible. The garlic will be peeled and then cooked in whole. It adds a nice flavor to the soup.
4. CHINESE DRIED RED DATES: The red dates also add some sweetness to the soup. Lots of Chinese soup recipe usually call for Chinese dried red dates.
5. DRIED LOTUS SEEDS: These seeds are high in B complex and other minerals and I love lotus seeds in soup. They can be slightly crunchy if you don’t cook them to the point of soft. I like them either way, soft or slightly crunchy.
6. DRIED GOJI BERRIES: Goji berries are so widely available now. I got mine from Costco and they are organic and unsulfured too. 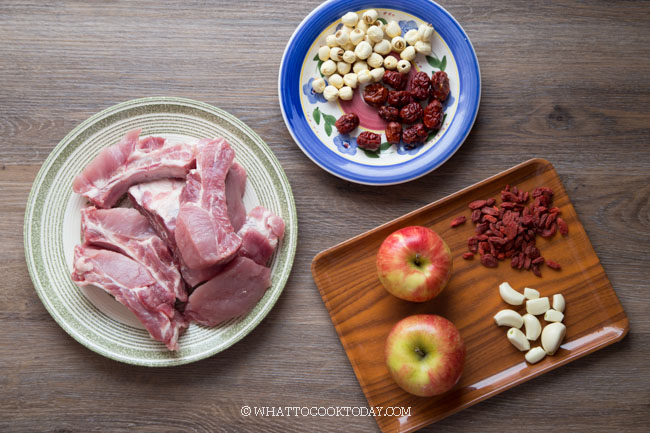 HOW TO COOK CHINESE APPLE PORK RIBS SOUP WITH PRESSURE COOKER, SLOW COOKER OR ON THE STOVE

1. PREPARE THE APPLES: You can leave the peels on the apples or peel them off. Cut into quarters and discard the apple seeds. Soak in water with 1/2 tsp of salt to prevent browning. Then discard water and rinse the apple to get rid of salt 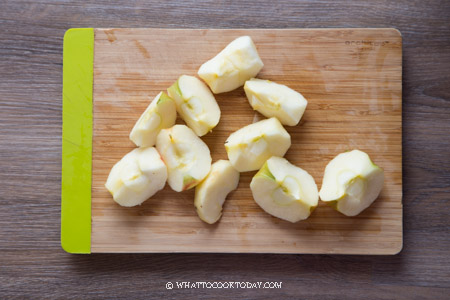 2. PREPARE PORK RIBS : Blanch the pork ribs in boiling water for 5 minutes and then remove the scum
3. ADD EVERYTHING: Put the pork ribs and the rest of the ingredients inside the inner pot of instant pot or a large pot if cooking on the stove 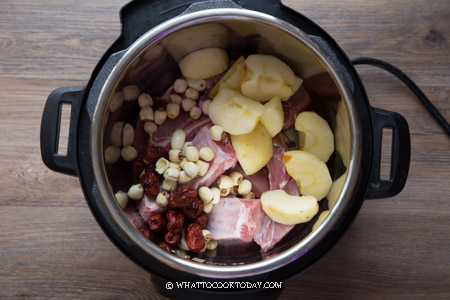 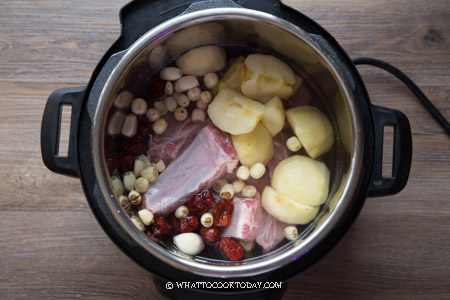 5. COOKING:
For Instant Pot pressure cooker: cover the lid and turn the steam release valve to “sealing”. Press the pressure cooker button and make sure it’s on a high and set the timer to 40 minutes for large ribs (Mine wasn’t cut into smaller piece). If yours are cut into small pieces, you may only need 15 minutes. Wait 5 minutes and then release pressure.
For stove-top: Bring the water to a boil and then lower the heat to let it gently simmer for the next 1 1/2 to 2 hours or until the ribs are tender 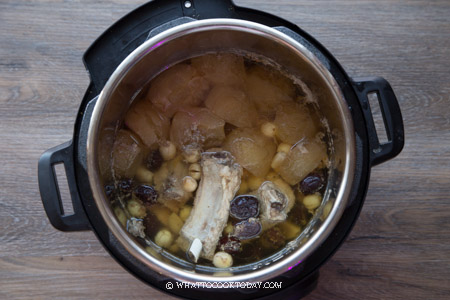 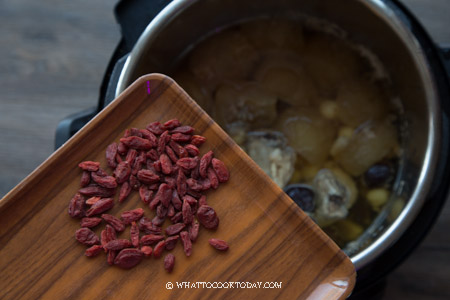 6. SEASON: Season the soup with salt to your taste 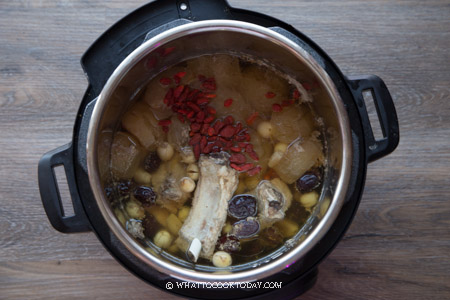 PROTEIN: You can use chicken, pork loin
CHINESE HERBS OR INGREDIENTS: You can use or add different kinds of Chinese herbs or ingredients such as: ginger, ginseng, snow fungus, dried longan, dried black dates, etc. In the video, I used honey dates, red dates, sweet apricot kernels. 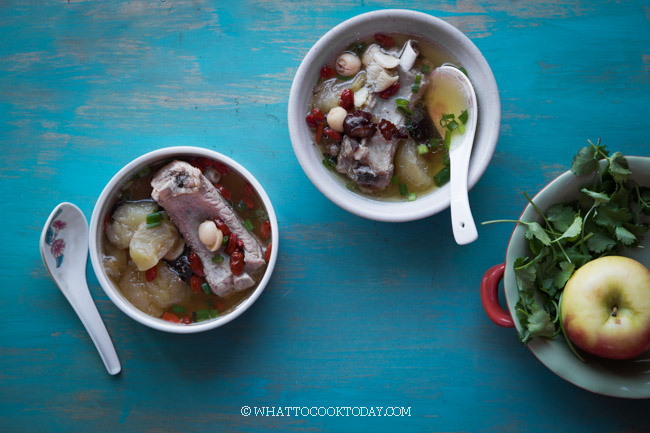 HOW TO STORE AND REHEAT LEFTOVER APPLE PORK RIBS SOUP

Storing: Keep in the refrigerator for up to 3 days.
Reheating: Simply reheat on the stove by bringing to a boil until heated through or in the microwave 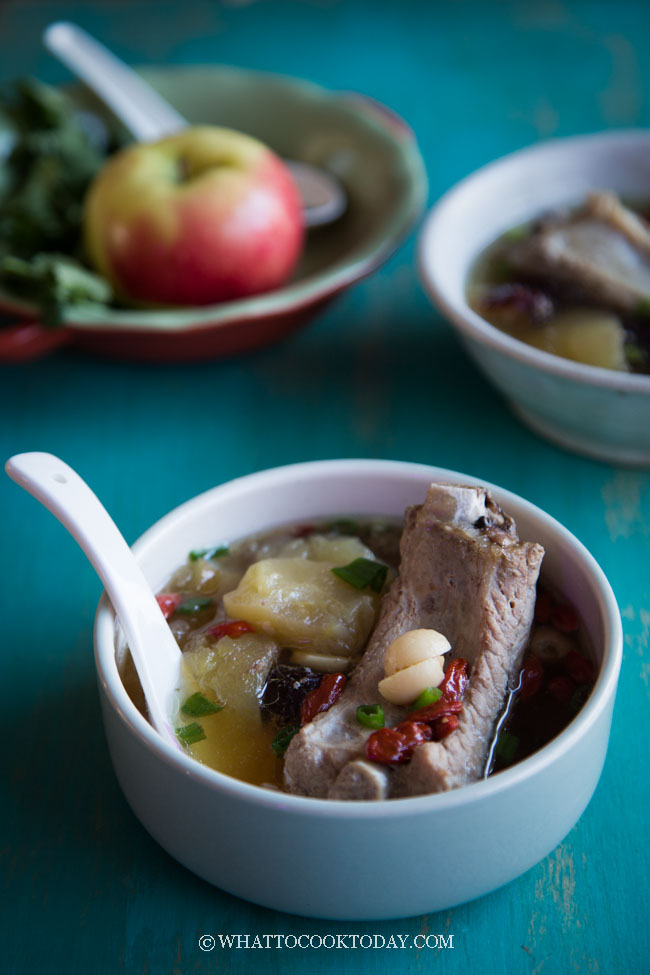 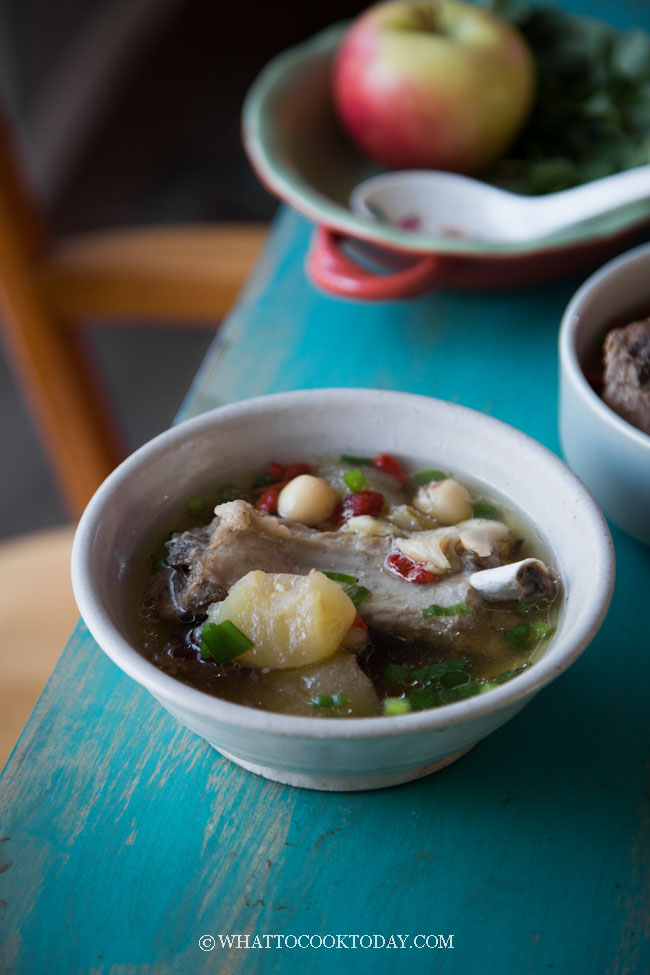 DID YOU MAKE THIS CHINESE APPLE PORK RIBS SOUP RECIPE?

I love it when you guys snap a photo and tag to show me what you’ve made 🙂 Simply tag me @WhatToCookToday #WhatToCookToday on Instagram and I’ll be sure to stop by and take a peek for real!
*Recipe is written for 6-quart Instant Pot. Cooking time should remain the same for 8-quart size but will take longer to pressurize. For mini duo (3-quart), I recommend to half the recipe and use the same amount of time to cook. Cooking time doesn’t change because the time is based on the size of your pot not the quantity of the food* 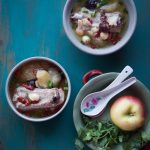 Hi I was wondering.. if I use a slow cooker to cook it and put it on high, how long would it take to cook the pork rib?

Have you ever tried putting dried scallops in? Or maybe carrots even instead of apples or with apples?

Hi Clement, I haven’t, but I bet if you add dried scallops in, it will be very tasty, adding more flavor. You can definitely add carrots or replaced apples with carrots. It’s very flexible 🙂

This is the FIRST time i attempted to have fruit in my Chinese soup, and boy, was I glad i tried it! The soup tastes amazing, and the stewed apples were really yummy to eat too! I omited lotus seeds (no one in my family is a fan), and forgot about the gogi berries, but it still turned out great! I added a few strips of candied winter melon as my apples were quite sour, and i think it balanced out just right. Thank you for this recipe!

Hi Serene, It is a weird idea to have fruit in a soup ha..ha..! but I’m glad you give it a try and great idea to add winter melon to balance the tartness from the apples. Thank you for sharing!

Hi there, this recipe looks great. May i ask if i can put some sliced ginger in top give it more flavour? Thanks,’

You certainly can. I love ginger in a soup too.

Hi! I tried to cook this.. but why does the soup becomes a little sour?

Hi Lee, did you stir in the goji berries last ? if you boil the goji berries with everything else, they will make your soup sour. Also the kind of apples you use may have affect the taste too.

Hi Marvellina! Thank you for sharing this recipe. I am looking to cook this soup in advance in view of the birth of my son. Do you think I can freeze the soup once done so that I can use it during the confinement period (I will unfortunately not have my mum or anyone who can cook for me during this period!). Thank you in advance for your advice!

Hi Smita, Congratulation to you 🙂 Yes, you definitely can make in a big batch, let it cools down and portion them out in the serving size you like and freeze them. It should be good for up to 2-3 months. That will save you lots of time as you will be busy taking care of your baby boy. I hope this helps!

A warming looking soup, I would need it now, we are having the coldest July I have ever experienced in my life, we have been having no more than 55 degrees during the last two weeks (50 yesterday) and dark the whole time. November wheather! It could be a soup my grandma used to make, if it wasn’t for the dates, lotus and berries. But she would use tons of garlic as well. 🙂

Oh my! you sure have a “colder” summer. It’s so humid and warm here!!!

This soup really sounds like a winner – bookmarked and will be trying it as soon as we have colder weather. It will be something to look forward to in the fall, I am sure! Every recipe I’ve tried of yours has made me happy (and the family too:)

It’s our staple in the Fall and winter too. Thank you for your support and kind words always Milena! Cheers!

Hi, can I cook this soup with slow cooker , thanks

You can, but probably you don’t want to put the chicken and apple in at the same time especially if you going to let it cooked slowly for long time. My thought is the apple might turn into mush by the end of cooking. Te apple should be soft, but not a complete mush. I’d say probably after the pork ribs are cooked but not to the point of falling off the bones, you can put in the apple and ginkgo nuts. Hope it makes sense 🙂 sorry for the late reply