Home >> All About Noodles >> NOODLE SOUP WITH HOME-MADE FISH BALLS Fish balls are very common food in Southeast Asia and other part of Asia, such as China and Hong Kong. I grew up eating lots of fish balls. To me, it’s like the meat balls in the western cooking. You can make your own or bought it fresh or frozen from the wet market in Southeast Asia (similar to farmer’s market here in the U.S.). In Indonesia we call fish balls as bakso ikan. Fish balls can be used in cooking such as soup, stir-fry and deep-fry. The deep-fried fish balls are often seen as street food in Hong Kong. Each fish ball is thread in a bamboo skewer like a satay.

So many times I’ve been so tempted to buy the frozen fish balls from the Asian grocery store here, however, when I looked at the ingredients, monosodium glutamate and other chemicals, like borax are often part of it. I missed eating fish balls so much. My mom has a great recipe for fish balls, however, her recipe calls for Spanish Mackerel that I couldn’t find here, so I never attempted to make one.

So, the other day I saw recipe for fish balls at Beyond The Great Wall cookbook by Jeffrey Alford and Naomi Duguid. The recipe calls for any kind of white-fleshed fish. I thought I gave it a try since I haven’t had it for so long. It was surprisingly easy to make. I used tilapia to make the fish balls. I think they turned out alright, probably would be even better if I used Spanish mackerel. If you can get hold of them, I strongly suggest using Spanish mackerel instead. Taste-wise, they were pretty good actually. Freezing weather with a bowl of hot noodle with fish balls soup….yummmbo! 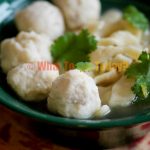 This is one of the most popular homemade soups. As you may already know, making this soup is an all day long task. I always love to eat this with chopsticks.