The first time I had a dish cooked with red yeast rice/red fermented rice/red vinasse was the time when I had my “confinement period” after giving birth to my baby girl. I have liked it ever since. The red yeast rice itself doesn’t have any taste, in fact, they are like regular rice grains. The only distinctive thing about the red yeast rice is of course the vibrant red colors.

You probably know about red yeast rice from non-cooking sources. I’ve seen red yeast rice supplements. The details I read from wikipedia about red yeast rice is that in the late 1970s, researchers in the United States and Japan were isolating lovastatin from Aspergillus and monacolins from Monascus, respectively, the latter being the same fungus used to make red yeast rice but cultured under carefully controlled conditions. Chemical analysis soon showed that lovastatin and monacolin K are identical. The article “The origin of statins” summarizes how the two isolations, documentations and patent applications were just months apart. Lovastatin became the patented, prescription drug Mevacor for Merck & Co. Red yeast rice went on to become a contentious non-prescription dietary supplement in the United States and other countries.

So, that’s a little background about the red yeast rice. Red yeast rice is being used very often in Asian cooking and for making certain types of wine. It is being used in cooking mainly for its color. I like how the dish tastes, sweet and slightly sour from the glutinous rice wine and aromatic thanks to the garlic, ginger and sesame oil. I put this dish under confinement recipes category as well because I think it just fits perfectly. 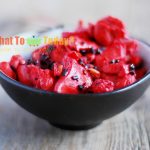 Where do you buy the red yeast rice? I live in Canada, it seems that it is pretty difficult to get it here.
Thank you!

I hate to tell you that it’s not easy to find here in the U.S. too. I got mine because my mom bought it to me from Singapore.