Tagine is a dish originated from North Africa and named after the special pot used to cook the dish. Tagine consists of two parts: a base unit that is flat and circular with low sides, and a large cone or dome-shaped cover that sits on the base during cooking. The cover is so designed to promote the return of all condensation to the bottom. When you remove the dome-shaped cover, you can bring the dish straight to the table and serve.

This fish tagine in this recipe is prepared with spices like garam masala, cinnamon, saffron and tomato based. Served with couscos and yogurt mixed with harissa. Oh boy…the combination is so robust in flavor and good. The fennel and lemon salad is a different to me too. I’ve never eaten raw fennels. I didn’t care much for it at first, but the more I ate it, the more I like it. 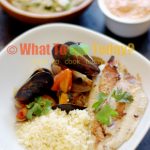 If you can’t find store-bought harrisa mix, you can make you own by using: 3 oz (85 g) dried chili such as guajilo or ancho chili (soaked in warm water until soft), 1 clove garlic, pinch of salt, 1 tsp ground coriander, 1 tsp caraway seeds, 1 red bell pepper. Process everything in a food processor into a paste and add some olive oil to help it going. Store it in a container and pour some oil on top of it. Put in refrigerator and may last for 2-3 weeks.
Tried this recipe?Mention @whattocooktoday or tag #WhatToCookToday How To Make The Best Beer-Battered Fish and...