Hakka Pulled Pork Noodles with Cracklings (Bakmi Khek Medan) is one of those non mainstream dishes that barely anyone knows outside of Indonesia, but it is seriously DELICIOUS. Chewy noodles are tossed in flavorful pork fat served with pulled pork and crispy cracklings are sure to get you hooked. Bakmi Khek or loosely translated as Hakka Pork noodles is one of my top-on-the-list foods to eat whenever I go back to my hometown in Medan, Indonesia. Hakka is a group of Chinese community who speaks one of the many dialects existed in China and worldwide. My father in law is a Hakka and speaks the dialect fluently. My husband still understands the dialect but probably doesn’t speak Hakka language as fluently as he used to. This simple yet very tasty noodles will knock your socks off! I’m not even kidding! It is a noodle dish consist of noodle serves with pulled pork, lots of pork lard (this is what makes it unbelievably tasty), and crispy cracklings made of the pork skin. The noodles used are usually chewy in texture and some can be curly or we call it mie keriting (curly noodles). This hakka style pork noodles are very simple in appearance but crazy good in taste. Healthy ? NO ! Not something you want to have everyday, but I sure can allow this in my diet once a month maybe (or once every two weeks?) 😉 I missed this so extremely much, so I attempted to make one of my own today for lunch and I can’t say it is as good as the one they are selling in Medan, but, hey…I’m thousands of miles away and I’m delighted to say that it is delicious enough!!!!! 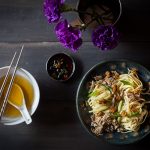 Seasonings to marinate pork (adjust to your preference):

HOW TO MAKE PORK CRACKLINGS:

It's hard to find good quality fresh egg noodles without preservatives and additives. I've made this using high quality spaghetti noodles and Korean wheat noodles (as shown in the photos) and they are still delicious
Tried this recipe?Mention @whattocooktoday or tag #WhatToCookToday I added this recipe some time ago to my to do list and I intended to make this dish this week. But when I read the recipe closely today, I had some doubts about the amount of pork meat to be used. Are you sure that the amount of pork shoulder and pork belly, combined about 1.8 kg! for 4-5 persons, in this recipe is correct? Usually, noodle dishes with meat contain approx. 100 grams of meat per person. So, in this recipe I would have expected 400-500 grams of pork meat for 4-5 persons. Since I like meat (you must be brave to say that nowadays …), 600-750 grams of pork would have been fine too. But even for me the 1.8 kg of pork seems excessive. And the pictures of this dish do not indicate that you used such a huge amount of pork. Could you take a look if my doubts are legitimate? If so, what amount of pork shoulder and pork belly would you suggest for 4-5 people?

Many thanks and kind regards,
Fred

Hi Fred, you have a legitimate doubt 🙂 When I did this recipe a long time ago, I actually use the fat part of the pork belly to make the pork lardons and this part actually varies from each pork belly (some has more fat less meat than the others, etc). I have “fixed” the recipe to reflect the change (less confusion). The pork fat is mainly to make the lardons and to get the lard for the noodles. I hope that helps to clarify.

I hear you Stef. I have lots to learn about noodles at other parts of the world too. It always amazes me the varieties of food we have out there!!!