So, yesterday I posted the cowboy meatballs recipe and I did mention something about testicles. Now I’m writing about beer BUTT chicken. What in the world is she doing ? I can only promise you that there are no profanity at this site and you will end up with good meals.

So what’s the fuss about this beer butt chicken ? As weird as the title reads, it actually just involves you sticking a can or bottle of beer into the chicken’s lower cavity, in this case, the butt! The beer butt chicken is another recipe from the Southern part of the U.S.

I honestly think I couldn’t do this. I mean I was a little worry with the 5 lb-chicken supported merely by a can/bottle of beer. What if the whole thing tip over while cooking and I’ll end up with a huge mess in the oven and no lunch! That spells disaster, doesn’t it ? Of course all the bad things that I imagined never happened as usual. In fact, I ended up with a beautifully cooked chicken and even better when we ate it.

The steam from the beer cooks the inside of the bird and the meat ends up so moist and juicy while flavoring it at the same time. And oh…. Have I also mentioned this is also a Fiorina-approved recipe ? My daughter hardly wants to eat meat of any kind. Well, she would if I ground it up very finely and sneak it in somewhere. I tore her chunks of this beer butt chicken and she ate this without spitting it out! In fact, her mouth opened so fast that I was trying to keep up with her. Wohooo!!! I’ll definitely make this again! 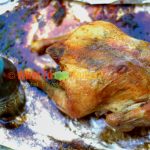 Oh i was so excited to try this recipe, but didnot realize the top of the beer bottle stuck out from the top of my chicken 🙁 so It defeat the purpose! Nevertheless the spices paste made the chicken really yummy. I will try again tomorrow with another chicken! A question though, does the beer dried:finished up when you oven the chicken?

Oh…Try to angle the chicken a little bit so that the top of the beer bottle will kinda sit near the middle of the body so it won’t go through all the way if I’m making any sense. Actually the beer wasn’t dried up when the chicken is finished cooking 🙂