I considered myself a person who pretty much eat anything under the sun, with few exceptions. That’s not anything under the sun you would say. Well, “pretty much” !! I haven’t eaten things like bugs and I believe lots of other different meats from the animal kingdom..oh, and testicles too! Yes, why do I want to eat testicles ! Have you ever watched that Fear Factor show where they dare you to eat things like testicles, roaches ? Those people did it. I almost gagged myself just watching them trying to swallow the live roaches, boiled testicles and gosh..who knows what else!

The reason why I brought up this testicles topic was because of the story behind this recipe you are about to see when you scroll down! No..no…no…there are no testicles involved. In the Wild West, there is this dish called “Rocky Mountain Oysters” and it is not the seafood oyster if you are wondering! Rocky Mountain Oysters are deep-fried calves’ testicles (ouch!) and they are a Wild West delicacy (Wow!). It is considered the cowboy meatballs because of its size and the shape (like meatballs).

Instead of using testicles, Jamie Oliver used ground meat stuffed with cheese and smothered in a rich chile sauce. I know I just said that I wouldn’t eat testicles. If the Rocky Mountain Oysters taste exactly like this cowboy meatballs I made, then I guess I’m sold with eating testicles then! You gotta try this cowboy meatballs. So very good. When that cheese oozes out when you dig into the giant meatballs, man!!!! that sauce is spectacular in every way I can imagine!

Like Jamie, I dedicate these balls to all the bulls in the Wild West losing theirs !! 😉 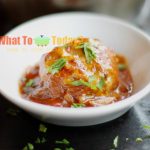 For having such humble, rustic origins, these meatballs look gourmet!

I agree. Rustic and gourmet at the same time!