Cloud bread is seriously like a cloud. Airy and light and made with mainly eggs and Greek yogurt. I added caramelized onion and scallion to the cloud bread. Of course I didn’t know what the heck cloud bread was until I saw it all over pinterest. I was intrigued to try it because of the name! Then few days before that I asked my husband if he still remembered the caramelized onion scallion milk buns (Roti Bawang) most kids in the hometown we grew up at ate and he said “Yes…gosh..do you know how to make those?” So, those milk buns were baking as I’m typing this recipe. I can’t wait to share that recipe soon. Cooling off the cloud bread

Now back to the cloud bread, I was inspired by the onion milk buns and decided to add the caramelized onion scallion to these cloud breads. My kids love the cloud bread. Perhaps the daughter was really hungry after school that she ate all 6 of them at one go! Recipe for the cloud bread is adapted from Buzz Feed 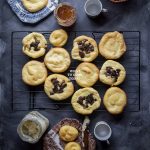 Making the onion and scallion topping:

Caramelized Onion Scallion Cloud Bread. Sooo airy and light like…cloud !! I added some caramelized onion and scallion (inspired by my childhood favorite onion scallion milk buns) and certainly won’t be the last! The daughter polished them off!!
Recipe here: http://whattocooktoday.com/caramelized-onion-scallion-cloud-bread.html We love to eat plain cloud bread (without the caramelized onion scallion topping) with jam too! Can plain yogurt be used instead of greek yogurt?

Hi Helen, I haven’t tried with regular yogurt before but I don’t see why not. Regular yogurt might be a bit “runnier” compare to Greek yogurt but shouldn’t affect much I don’t think!