Kafta is one of the most popular meat dish in Middle Eastern and South Asian countries. There are quite numbers of varieties of Kafta available out there, but the kafta is traditionally made with a mixture of minced lamb and beef. Some also uses seafood such as shrimp and fish instead of meat to make kafta. They can be made into meat balls, patties, casseroles, etc.

I made the kafta using the mixture of minced lamb and beef, onions, parsley, all-spice powder. The kafta is then grilled and served with flatbread along with lettuce, sliced/chopped tomatoes, pickles, yogurt or you can use tahini. I’m not so much of a fan of pickles, so you don’t see them in the photos lol! The meat is also topped with some sprinkles of ground sumac. Sumac is a common spices in the Middle Eastern kitchen. The fruit of the sumac shrubs are made into powder. It is lemony in taste and often used as sprinkle on meat, salad, hummus, etc.

You can serve the grilled kafta as a burger with lettuce, tomatoes, pickles, ketchup, relish, mustard, or anything you like on your burger. 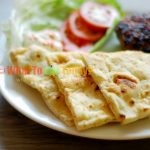