What do you do when you have leeks in the fridge ? Well, my original pan was to do a stir-fry with it, but for whatever reason I didn’t get around to do it and I just wanted to use up the leeks. I was going to do some leeks pancakes using the scallion pancakes recipe but then I got a bit lazy and wanted something that I can just stir and mix and hence this recipe 🙂 My daughter would eat them if I allowed her to dip them in the soy sauce (she likes to dip almost anything in soy sauce!!). My son would eat them as is. I like them with some sriracha sauce and some sour cream 🙂 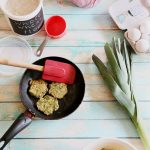 These look great. Can’t say I’ve really worked with leeks before but I’d be all over this.

They are not very common vegetables here in North America. We love this in stir-fry and pancakes like this

I love stuff like this! Going to pin it, so I can make it later.

Never thought of leaving the leeks in water to get rid of the dirt. Thanks for the trick.

I learned that from Martha Stewart 🙂