I’m not sure exactly how to “beautify” the title of this recipe, Pig’s Stomach Stir-fry. It probably sounds gross to most people. It is what it is. Pig’s Stomach that has been cleaned and cooked until soft and then stir-fry. As some of you may know that the internal organs of pigs such as: liver, kidney, tongue, stomach, etc are being used in Chinese culinary quite a bit.
This dish is actually not only consumed during confinement period. For confinement recipe, sesame oil, ginger and black vinegar (optional) are used. I know my mom will use Pig’s stomach and make a soup for Chinese New Year. Find the recipe below. 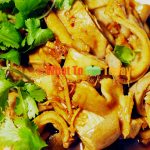 What about glorify the name of dish to Stir-Fry Pork Tripe?

Is ginger necessary for this pig stomach dish? I seemed to have every other ingredient except that!

It’s not absolutely necessary to have ginger for this dish. My mom was preparing this during my confinement few years ago 🙂 and ginger is a must in every dish during confinement (to her anyway!)