Quinoa Curry Chowder is a perfect one-pot complete meal that you will love making over and over again. I added spices like turmeric and sumac to this chowder. If you think quinoa is boring, try this! One fine evening my husband brought home ground sumac. I’ve never heard of it before then. I opened it up and have a quick taste and it tasted sour. I asked hubby why he got it and he said because it’s unique (I guess that’s why we are husband and wife!). I started googling and read about what to do with it. Apparently, this spice is pretty commonly used in Meditteranean food. It can pretty much be used in everything from soup, meat, seafood, some even sprinkle it on popcorns. I was a bit hesitant about using it in this quinoa curry chowder to be honest, but I thought, what did I have to lose right? if I really screwed it up, well then, I just wouldn’t use it anymore! 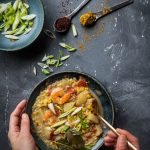 I guess I didn’t screw up though ha..ha..! I love this quinoa curry chowder on its own. It’s creamy with some Southeast Asian flavor in there. The sumac and its tangy profile sprinkled on top complement the dish well IMHO. Perhaps I’m used to the complex taste profile of Southeast Asian food (which usually includes sourness!). I have rubbed sumac on meat since then and no longer a sumac virgin! 🙂 Woops…forgot….your pictures/photography is absolutely Beautiful! And your recipes are fantastic..thanks so
much for sharing!!!! 🙂
Chris

Thank you so much for your kind words Chris 🙂 So glad you stopped by and for leaving me comments! Made my day!

I have a question? I do not know about anywhere else, but here in the Seattle WA. area, fresh Turmeric
root is available everywhere in regular grocery Stores. It has such wonderful flavor and the powdered form,
all it does is provide color, no flavor??? (I know that one has to wear gloves to peel and handle it or your
hands will be yellow-orange “forever!”) How come I’ve never seen any recipe calling for it’s use?
Chris

Hi Chris, fresh turmeric root is available in some selected non-Asian grocery stores too. I have to agree that the fresh form definitely is so much better. I think I included mostly turmeric powder in my recipe for convenience reason. The majority do not want to deal with fresh turmeric 🙂 Like you said, it stains EVERYTHING! even my poor countertop LOL! but if you have fresh turmeric, by all means, use that. I think it’s so much better too 🙂

Wow! This looks so comforting! Never heard of sumac before. I wonder what kind of flavour it has. Curious.

Hi Wei, it is actually sour 🙂 But not too sour!!