I saw this Beyond The Great Wall cookbook by Jeffrey Alford and Naomi Duguid and I flipped through it to see what was it all about. It’s an interesting cookbook to me because it covers the other part of China. China is definitely not just about Shanghai or Beijing. Those are the two that we often heard. From what I read from the cookbook, three-fifths of the land area in China is historically the home of people who are not ethnically Chinese. Tibet, for example, was once a Himalayan nation almost equal in size to China. Similarly, the Silk Road region of the far west (present-day Xinjiang), now home to the Uighurs, as well as Tajiks, Kazakhs, Tuvans, Tatars, Mongols, and Kirghiz.

This cookbook actually focuses on the outlying regions of present-day China, an area they refer to as “Beyond the Great Wall” and on the peoples who live there. With all that said, I started with Tibet and this Tibetan bone broth. Besides, Dalai Lama, so little do I know about Tibetan food. According to the cookbook, because Tibetan-inhabited areas range over a vast and diverse region, Tibetan food varies widely. In the fertile valleys of central and eastern Tibet, many kinds of vegetables and several grains (wheat and barley) are grown, as well as rapeseed (canola), raised for its oil. The livestok (yaks; yak-cow crossbreeds called dzomo, used for milk; and goats and sheep) occupy the ground level, while the living quarters are upstairs, where it is warmer and sunnier. The flat rooftops of houses in Tibet are used for drying vegetables, meat, chiles, and firewood, possible because most of Tibet is high desert with relatively little snow or rain.

Okay, so that’s a little bit of background for Tibet right there. Now, let’s eat 🙂 I prepared this Tibetan bone broth for the Tsampa Soup – one of the best soups I had ever tasted. This useful broth is called “ruthang” in Tibetan. It’s traditionally made by simmering yak bones. You and I know that there’s no way I would be able to find a single yak here 😉
So, the recipe substitutes yak with oxtail or you can use beef shank. I used beef oxtail. It’s our favorite! This bone broth really gives a great depth of flavor to the soup you are going to prepare. You can keep this in the fridge as you would your chicken broth. 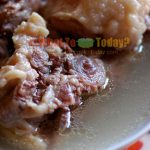 NOTE: Save the tender oxtails you've cooked for so long. I served them with the Tsampa soup 🙂
Tried this recipe?Mention @whattocooktoday or tag #WhatToCookToday
0 comment

BEEF AND PICKLED VEGETABLE RICE IN A CLAY POT