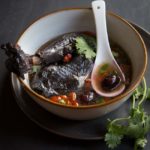 Nourishing and nutritious black silkie chicken is cooked with Chinese herbs. It can be prepared with Instant Pot pressure cooker, on the stove, or in a slow cooker. 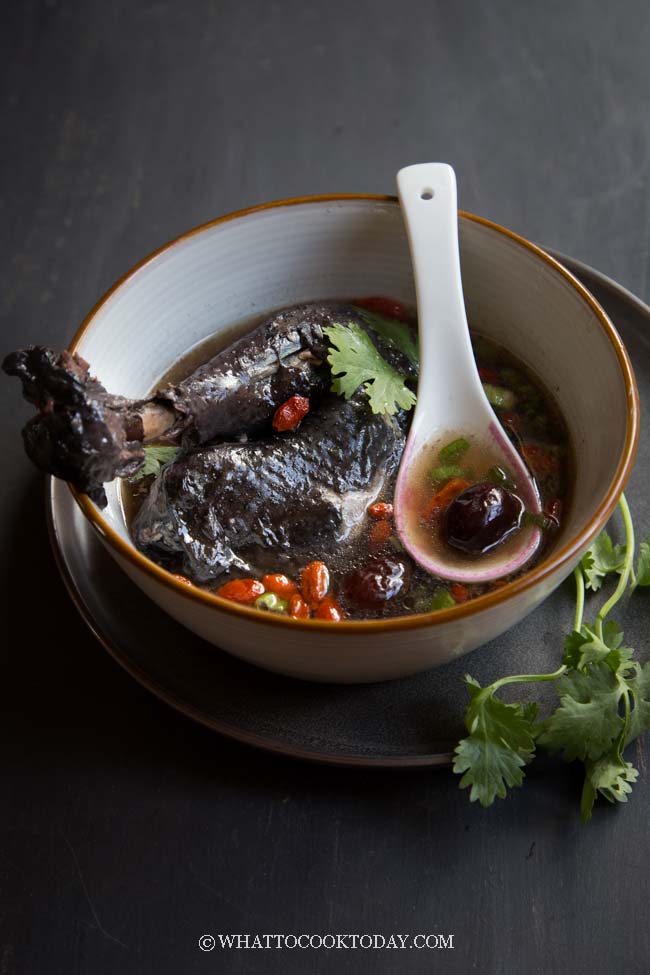 The Chinese values silkie chicken for its tonic property, especially for those who just recovered from illness, surgery, after having baby, or just as overall healthy soup for the family. My mom prepared soups using silkie chicken when I just had a baby and doing a confinement diet.
The silkie has a soft feather and also a bluish-black skin and grayish bones and flesh.

Despite cooking the whole silkie along with the skin and everything, the soup does not turn out greasy like it normally would if I use regular chicken. The flesh is lean but it tastes good.

COMMON USAGE OF SILKIE IN COOKING

Silkie is usually prepared as a soup in Chinese cuisine. All the goodness of the Chinese herbs and silkie goes into the soup, so I usually do not season the soup too heavily because I want to consume the soup without excess sodium. 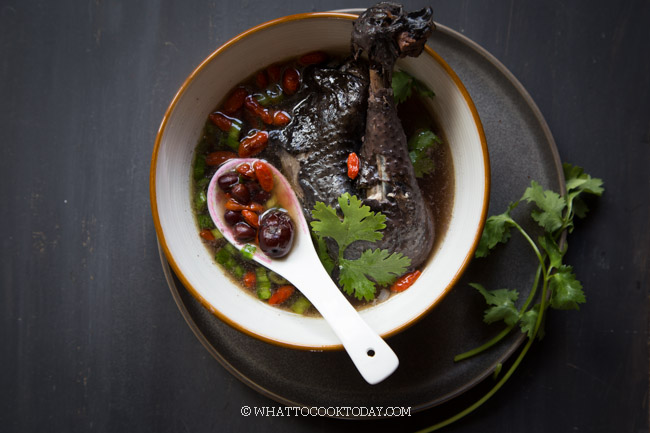 The Chinese herbs used to prepare this soup is pretty flexible, I guess depends on what you need. You can take out or add any Chinese herbs to suit your needs. Make sure you source for Chiense herbs from a reputable and trustworthy store. This shouldn’t be a problem if you live in Asia. It’s a bit challenging for me to get Chinese herbs like dong quai, chuan xiong, dang shen, and huang qi here. My mom or relatives who visit us will usually bring us some Chinese herbs. Goji berries, Chiense red or black dates are easier to find here in the U.S. Costco is selling goji berries now 🙂
Here are what I used in this recipe:
1. Goji berries (not in this photo): as a blood tonic, restore qi, improve strength, increase immunity
2. Chinese red dates (hong zao): To strengthen spleen, improves appetite, nourish blood and circulation.
3. Chinese black dates (hei zao): the black dates are considered to be more “heaty” compared to the red dates. They help to nourish blood as well.
4. Dong quai (Angelica sinensis): sometimes you will hear dong quai nicknamed as the “female ginseng”. Many women consume dong quai to help with gynecological issues such as irregular period, infertility, hormonal imbalance, etc. However, dong quai can actually benefit the male as well to help reduce inflammation.
5. Chuan xiong (Sichuan lovage root): to increase blood flow.
6. Dang shen (radix codonopsis): also known as a poor man’s ginseng. It aids with digestion, weakness, fatigue, and poor appetite.
7. Huang qi (Astragalus): it is known to help with boosting immunity. 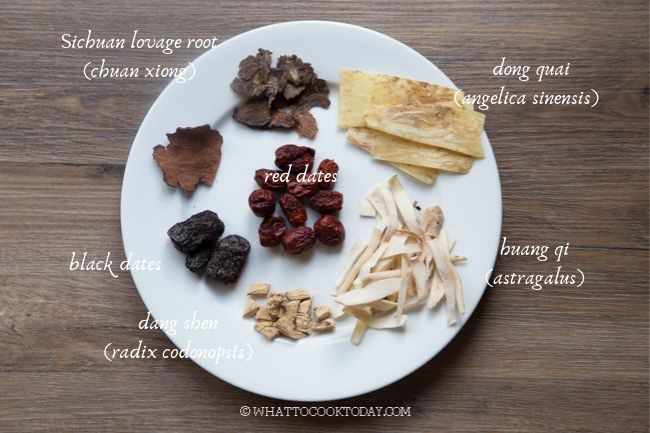 HOW TO PREPARE THE SILKIE CHICKEN

1. THAW IF FROZEN
The silkie I got come in a frozen form with internal organs already removed. 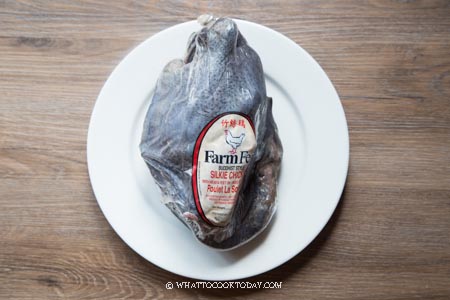 2. REMOVE HEAD, NECK AND FEET
Use a cleaver or sharp knife to detach the head and feet at the joints 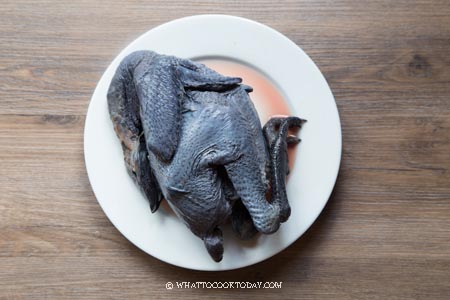 The head, neck and feet are still attached 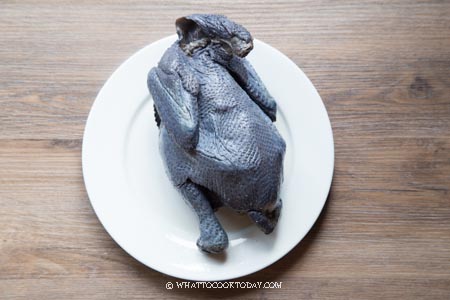 1. PREPARE THE CHINESE HERBAL PACKET
Place all the Chinese herbs except for red and black dates and goji berries in a tied cheesecloth or stock pack (photo below) . You don’t have to fish out all the herbs later. 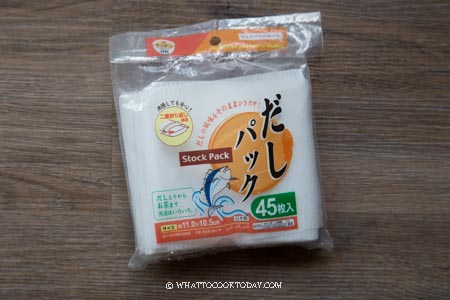 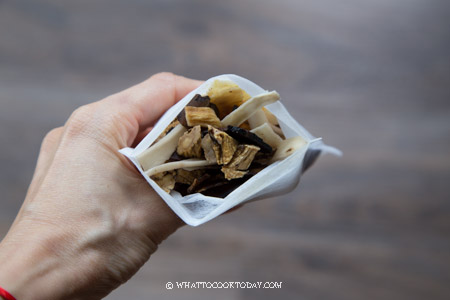 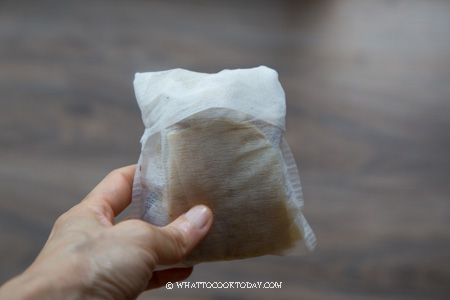 2. COOKING: Place the whole silkie inside the inner pot of Instant Pot or a large pot if cooking on the stove. Add the herbal pack, black dates, and red dates, ginger, dried scallops. Add water and seasonings. Bring to a boil. When it comes to a boil, lower the heat to let it gently simmer, with lid partially close, for the next 30 minutes or until the chicken is tender
If using Instant Pot pressure cooker, close the lid and pressure cook on high for 18 minutes and then wait 5 minutes to release pressure. 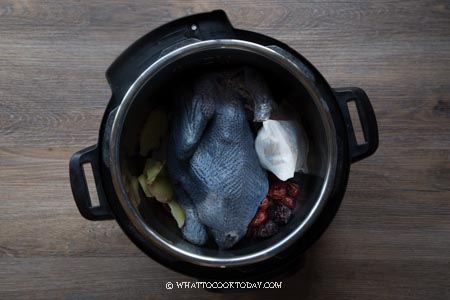 3. ADD THE GOJI BERRIES LAST AND SEASON TO TASTE
When the chicken is done cooking, stir in goji berries. Let the residual heat soften the berries. Season the soup with salt to your taste or skip the salt altogether if you prefer like I did. 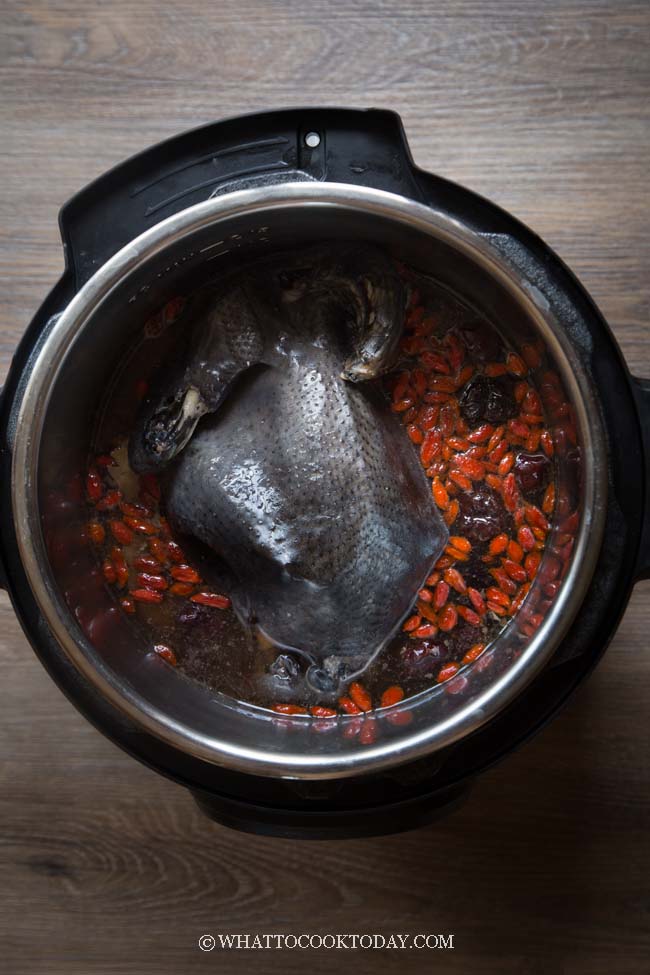 You have just prepared a nourishing and tasty Chinese herbal silkie chicken soup.

DID YOU MAKE THIS CHINESE HERBAL SILKIE CHICKEN SOUP RECIPE? 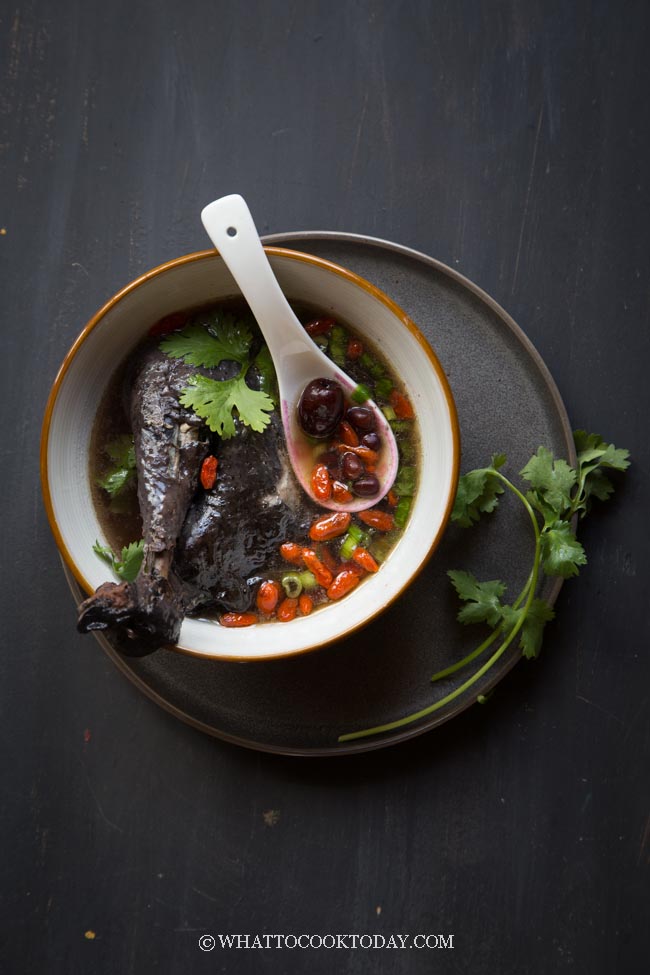 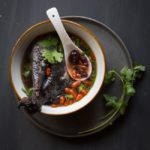 Seasonings: (adjust to your taste)

great, tnx. but why remove head/neck/feet *before* cooking? wouldn’t we want those things (well maybe not the head) adding their positive traits to the soup?
aside from that question, I am about to make this very soup, so thanks again!

Hi Joshua, you can certainly use the neck and feet if you like. That will certainly add more flavor to the soup.

Your black chicken with soya milk looks good. I might try it one of these days 😉 Thanks Dedy!

besides cook it in chinese herbs, i usually cook the silkie chicken with soya milk…
dentistvschef.wordpress.com/2011/03/29/resep-sup-ayam-hitamkapas-susu-kedelai-a-k-a-silkie-chicken-with-soya-milk-recipe/