That name is as cheesy as it can get, isn’t it ? lol. It is somewhat crazy because they were made with breast milk. I know..I know…! You are rolling your eyes or your jaw perhaps just dropped or just… What ?? breastmilk ? I thought only baby drank breastmilk. Well people…. it’s not only for baby, at least not when it comes to baking. And it’s not yucky! It really isn’t. When I nursed my first child for 14 months, I didn’t even dare to taste my own milk. I had my husband tasted it lol! and he did and he told me “it’s really mild and lightly sweet”. Still, I wasn’t convinced and I never even tasted my own milk the whole time. I don’t know what it was, but the thought of drinking my own milk was a bit weird ? This time around though with our second child, I did have a taste. I don’t want to miss out tasting my own milk and regret it later. It really tasted pretty mild and a bit sweet. But of course every mommy’s milk will taste somewhat different ? I guess that part I’ll never know 🙂

I had the whole freezer jam-packed with breast milk that I pumped out. My girl never wanted bottle and would only drink fresh from the source (me!) or from the cup. But even drinking from the cup, the supplies were abundant…seriously abundant that they ended up expired and I had to throw them ALL AWAY, which really pained my heart and soul seeing the liquid gold went to waste just like that. I wished that time I knew I could donate the milk, or use it in some baking, or for shower and whole bunch of other things. Oh well… second time around, yes…I’m a bit wiser. I used some expired to bath my son (thanks to my sis for the idea haha..) and while exchanging ideas with other moms at breastfeeding support group, some mamas used it for baking. I was like…. why didn’t I think of that ?? seriously ?? I don’t have a whole lot of breast milk in the freezer this time because I don’t pump like crazy woman like I did with my first one because I didn’t know better and just kept pumping and pumping and nursing and pumping..yeah..that’s all I did! Probably at least 35-40 bags in there ? I really don’t want them to go to waste this time and want to experiment with some baking. So, here it is….. The Crazy Mama Blueberry and Chocolate Muffins.

I know it’s hard for adults to accept the idea of eating food made of breast milk, however the muffin is very moist and delicious. If you think it’s gonna taste funky, funky it is not !! Can’t even tell I promise if there is breast milk in there. It is healthy too (minus the chocolate 😉 ). If you don’t have breast milk (don’t worry, I don’t expect anyone to have breast milk in their freezer), you can still make this muffin because I modified the recipe a bit from this Whole Wheat Oatmeal Blueberries Chocolate Chip Muffins. And oh yes….. I was out of oatmeal but I have this whole container of Earth’s Best Whole Grain baby Oatmeal that I originally got for my son. But the little guy doesn’t care for mushy stuff. So, I’ve been eating it ha..ha..! (Can’t you tell no food go to waste in this house?) and why not use it for baking ? again…crazy idea goes into this crazy muffins. But they turned out great and moist and yummylicious!

So, nursing mamas, if you have some extra or willing to milk out some fresh one to experiment with baking…this is a good one 🙂 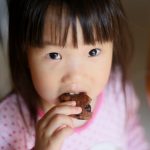 She enjoyed it 😉 I’ve eaten three of them so far! Gosh ! Speaking of exercising moderation ?