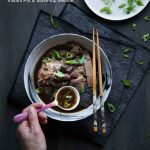 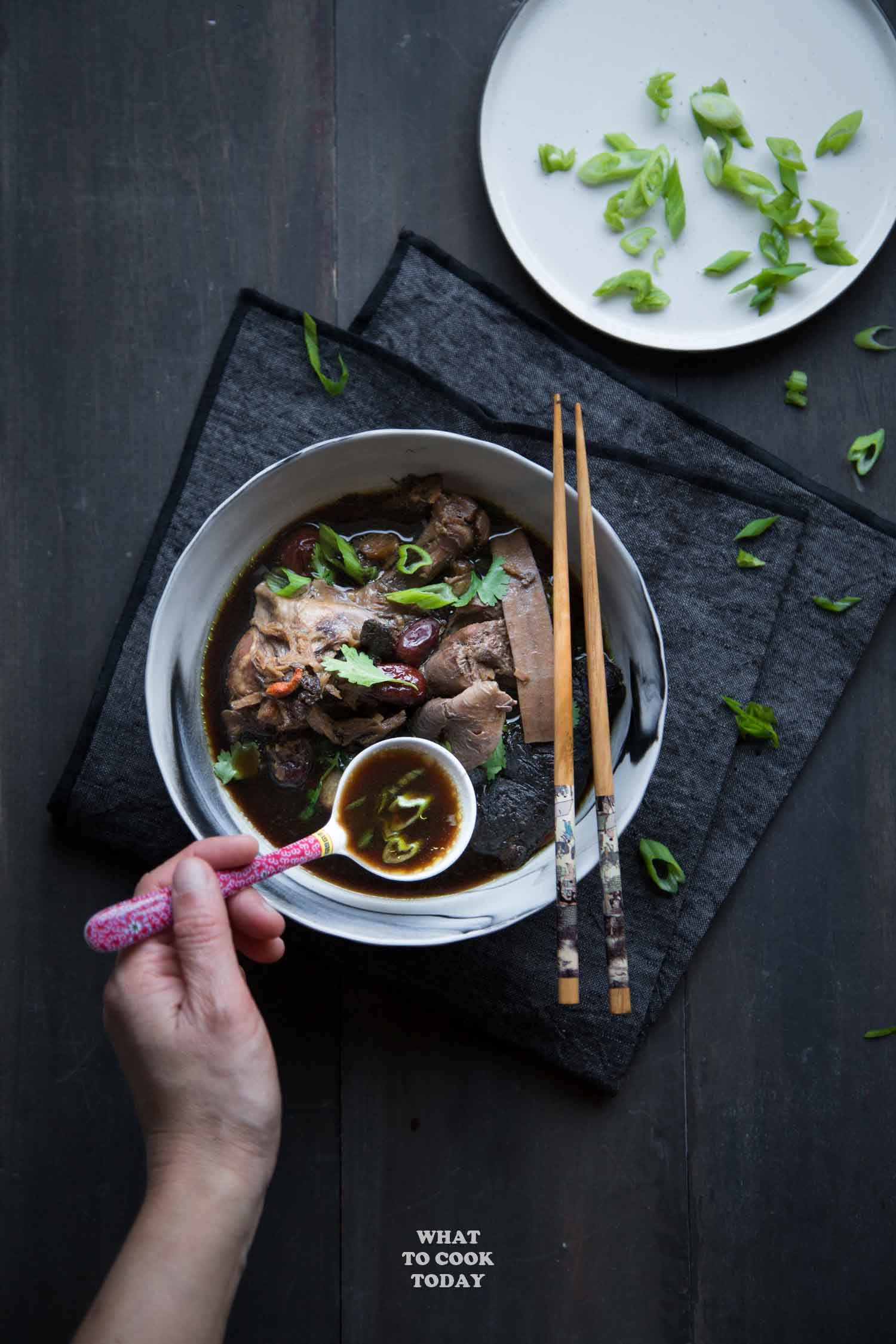 WHAT IS FOUR HERBS (SIBUT) SOUP?

Sibut soup is a soup made with four type of Chinese traditional herbs (or more in most cases). The four herbs my mom packs normally include Dang Gui (Angelica Root), Shu Di (Rehmannia glutinosa)-which contributes to the black color of the soup, Dang Shen (Codonopsis Root), Chuan Xiong (Ligusticum Striatum). Sibut is also conveniently sold in a packet with all the herbs already included at the Chinese Medicine Hall. 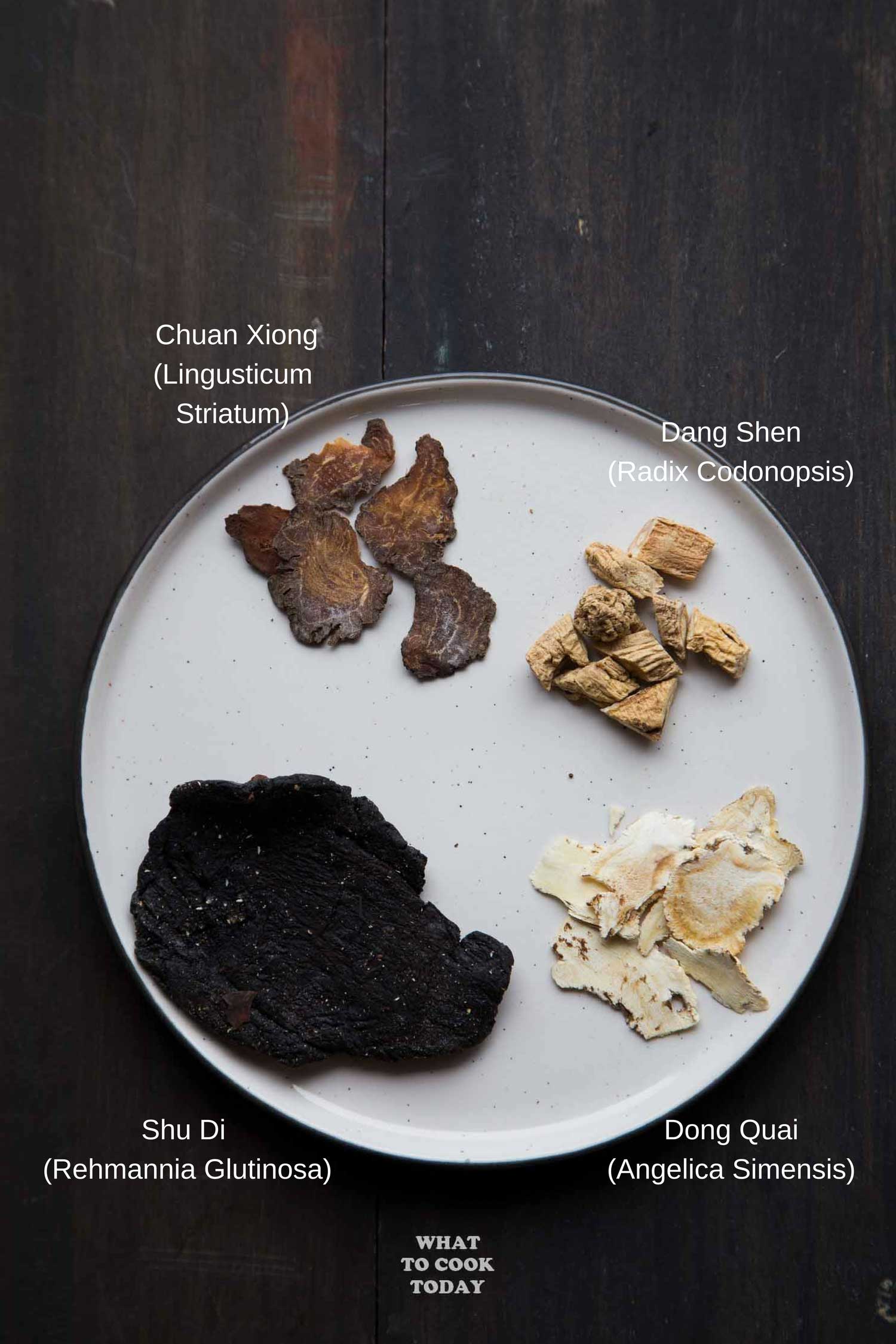 But apparently, it is not confined to only 4 herbs. Sometime mom will add red dates, black dates, goji berries and other herb like yu Zhu (Solomonseal Rhizome) to the soup to improve the taste of the soup. Some people do not want their soup to be black in color and so they don’t use Shu Di in the soup. My mom said the type of herbs can be swapped and catered to whatever one wants. I used four herbs (sibut) plus the other four optional herbs in this recipe (picture below). You can just do four herbs. 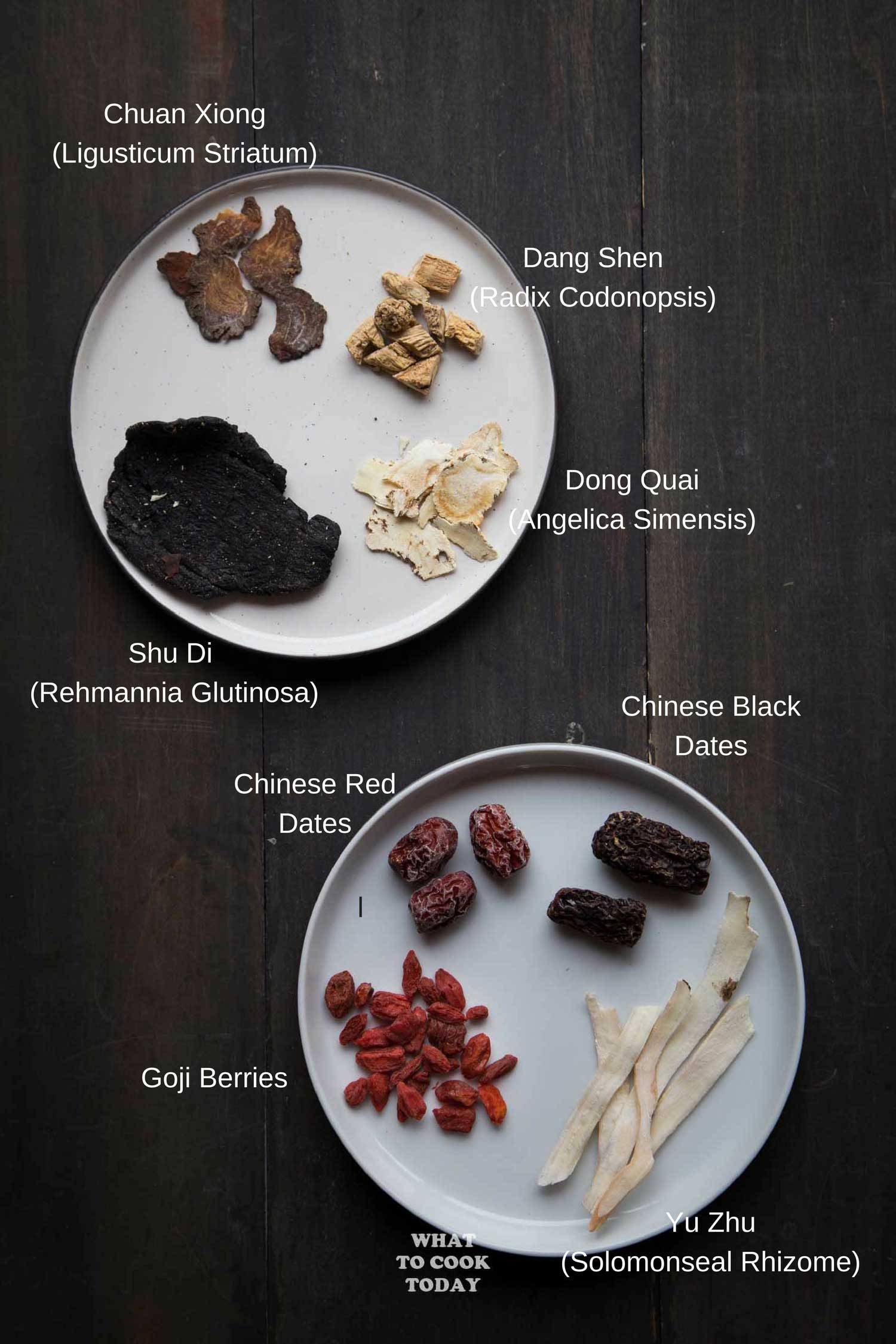 WHY IS THIS FOUR HERBS (SIBUT) SOUP IS BLACK IN COLOR?

The black color is contributed by the black looking piece of herb calls Shu Di Huang (Rehmannia Glutinosa Root). They are usually sold in dried form. Once cooked, they will plump up and actually quite tasty. But, as with all traditional Chinese Medicine, one piece is usually all you need in this recipe and more is not always better too. 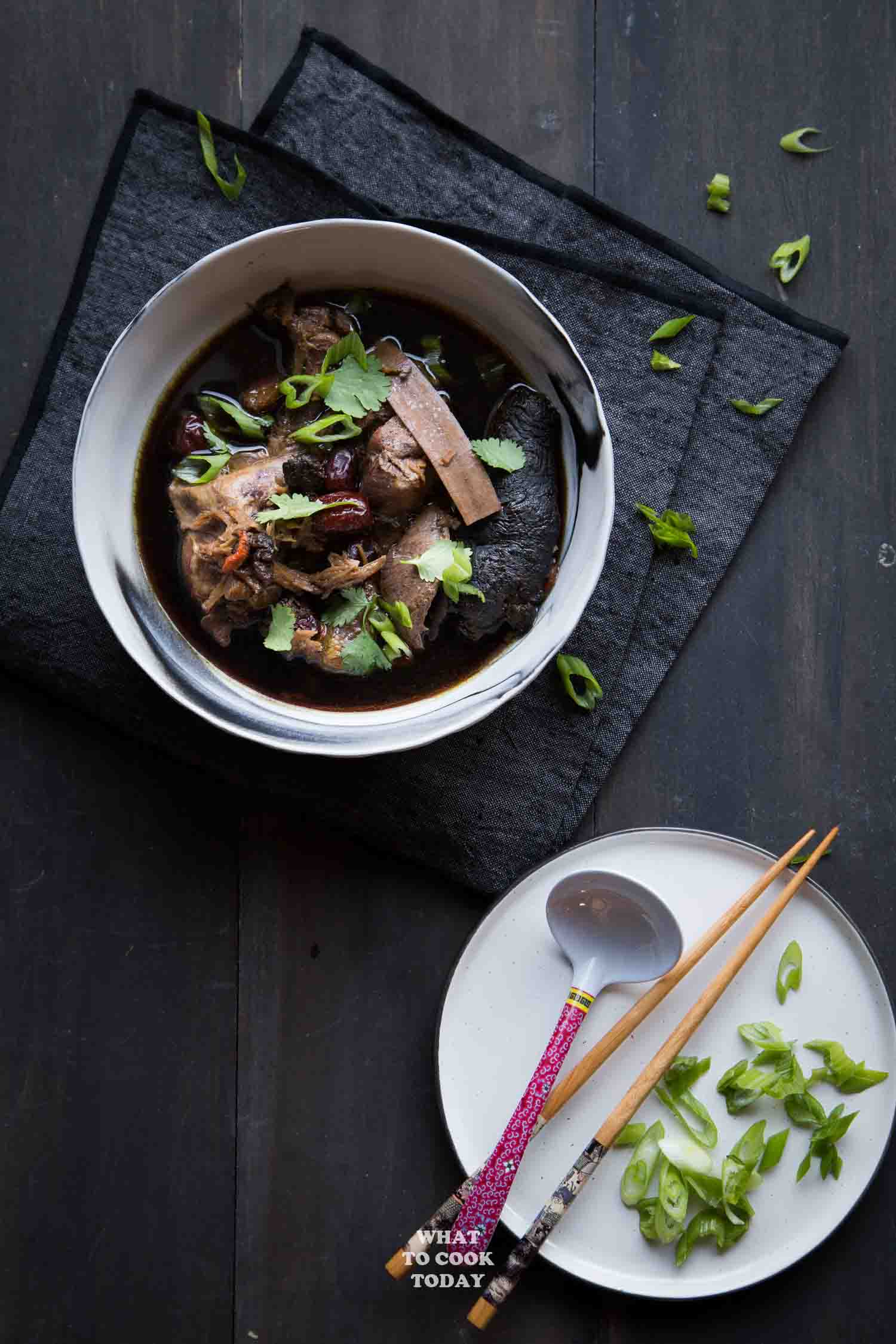 Each of the Chinese herb has its own medicinal properties. It is said that in general, sibut can help to tonify the body especially for post-partum women, BUT, that doesn’t mean only post-partum women will consume this. Any adult with no specific medical condition should be able to consume this. The Chinese believe that it helps to strengthen body and improve blood circulation in general. I’m not a medical professional or TCM professional, so you should always consult your physician if in doubt. 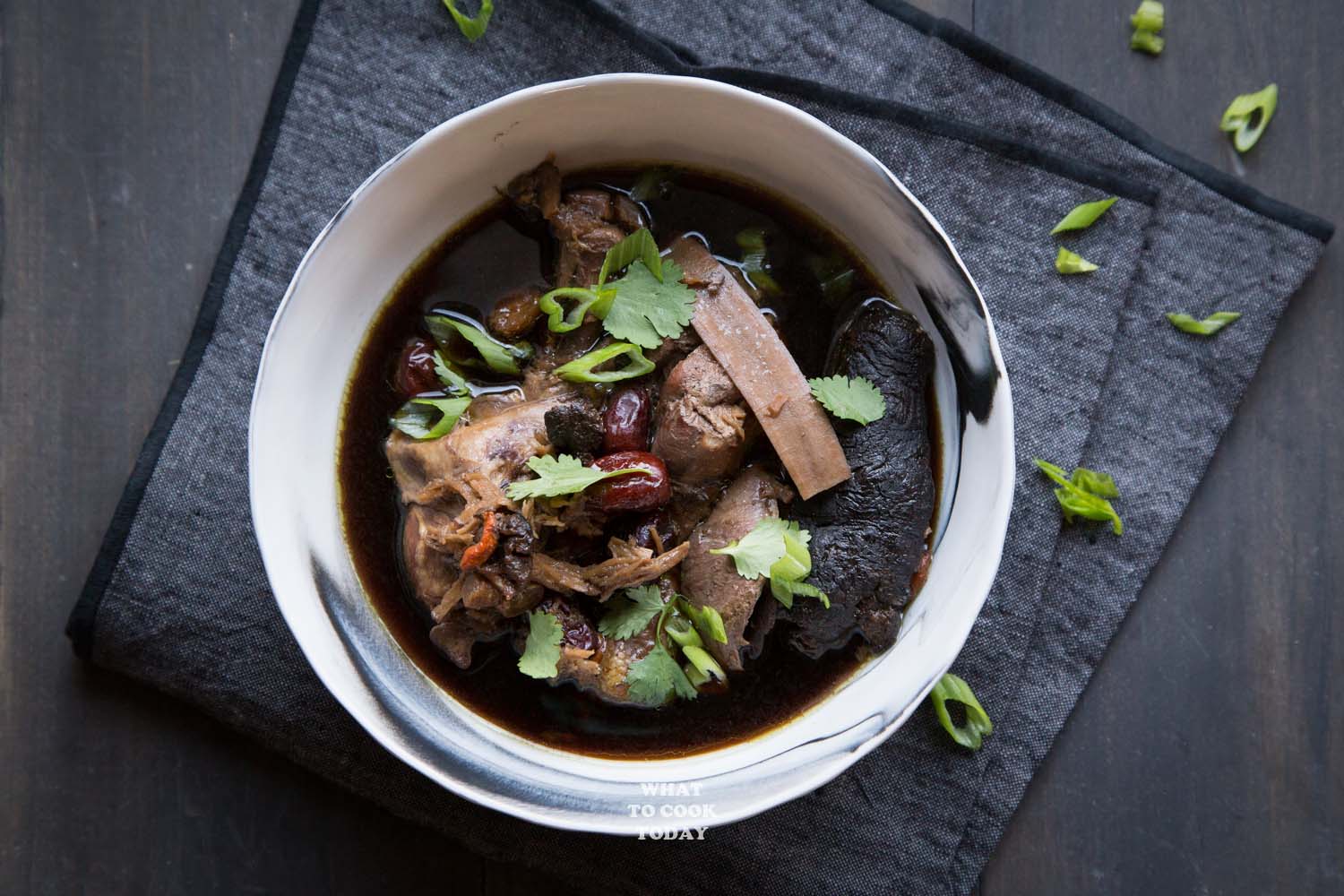 WHERE TO GET TRADITIONAL CHINESE MEDICINE?

I do not recommend getting them online, unless you really know their reputation. I include the scientific name of each of the Chinese herb, so you can bring this list to the Chinese Medicine Hall and get them, or easy yet, get the prepacked sibut. Goji berry is okay to be purchased online if you want to because it is a common ingredient now here in the U.S. and you can get good quality ones as many are selling them now. 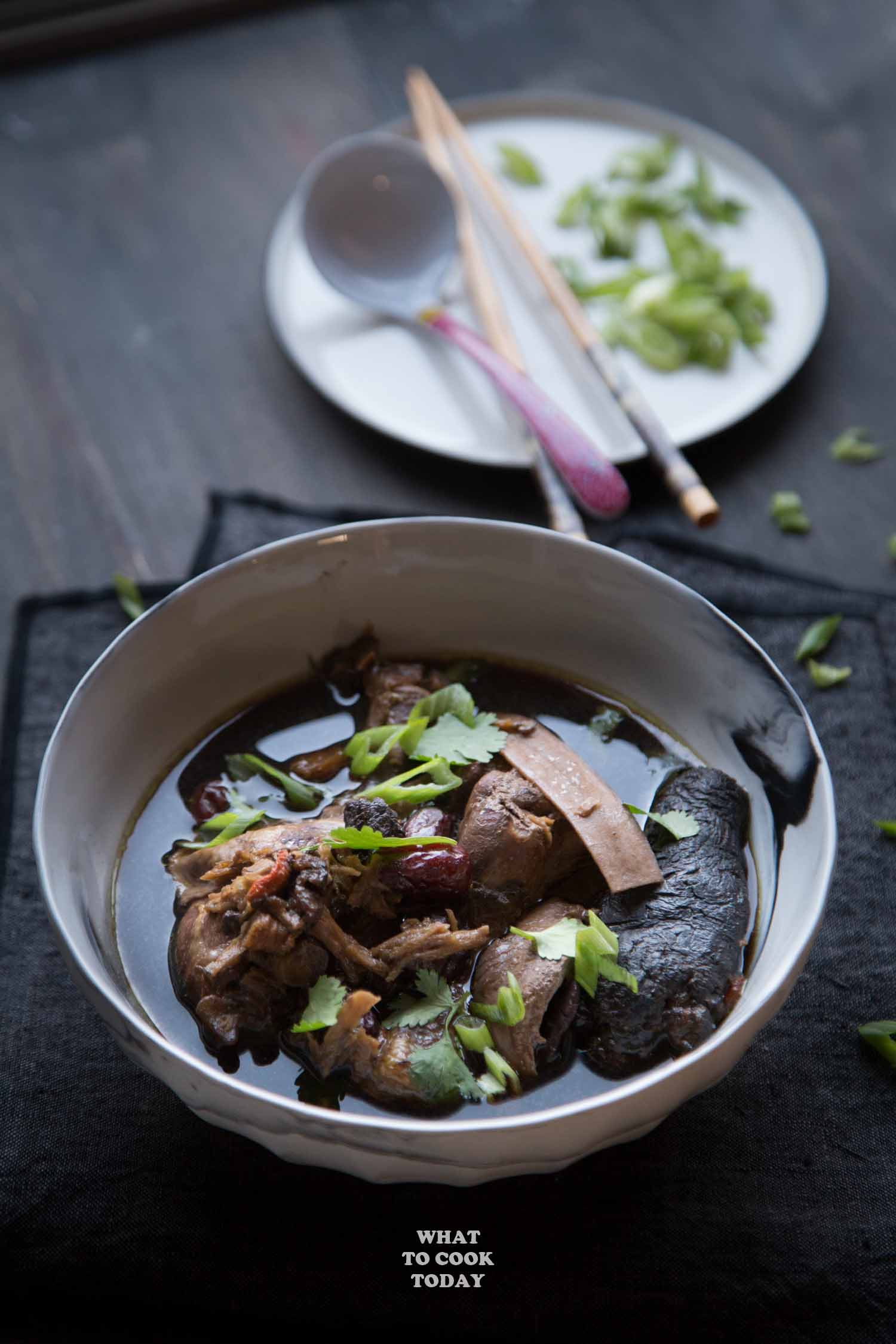 WHAT IS THE REASON OF ADDING GOJI BERRIES LAST TO THE SOUP?

Mom often tells me not to overcook goji berries for a long time because they will make the soup “sour” when they are cooked for too long. So, I always add the goji berries last, they get soft quickly and still retain its sweetness that way.

HOW TO MAKE A GOOD CHINESE FOUR HERBS (SIBUT) SOUP

1. Always source your Chinese herbs from a trusted source
2. Always rinse the dried herbs in water
3. Use organic and free range chicken if possible
4. Parboil the chicken and then get rid of the scum
5. Place chicken, water, and herbs (except for goji berries) in a pot. Bring to a boil and then slowly simmer for 1 hour
6. Add the goji berries last. Season with salt to taste 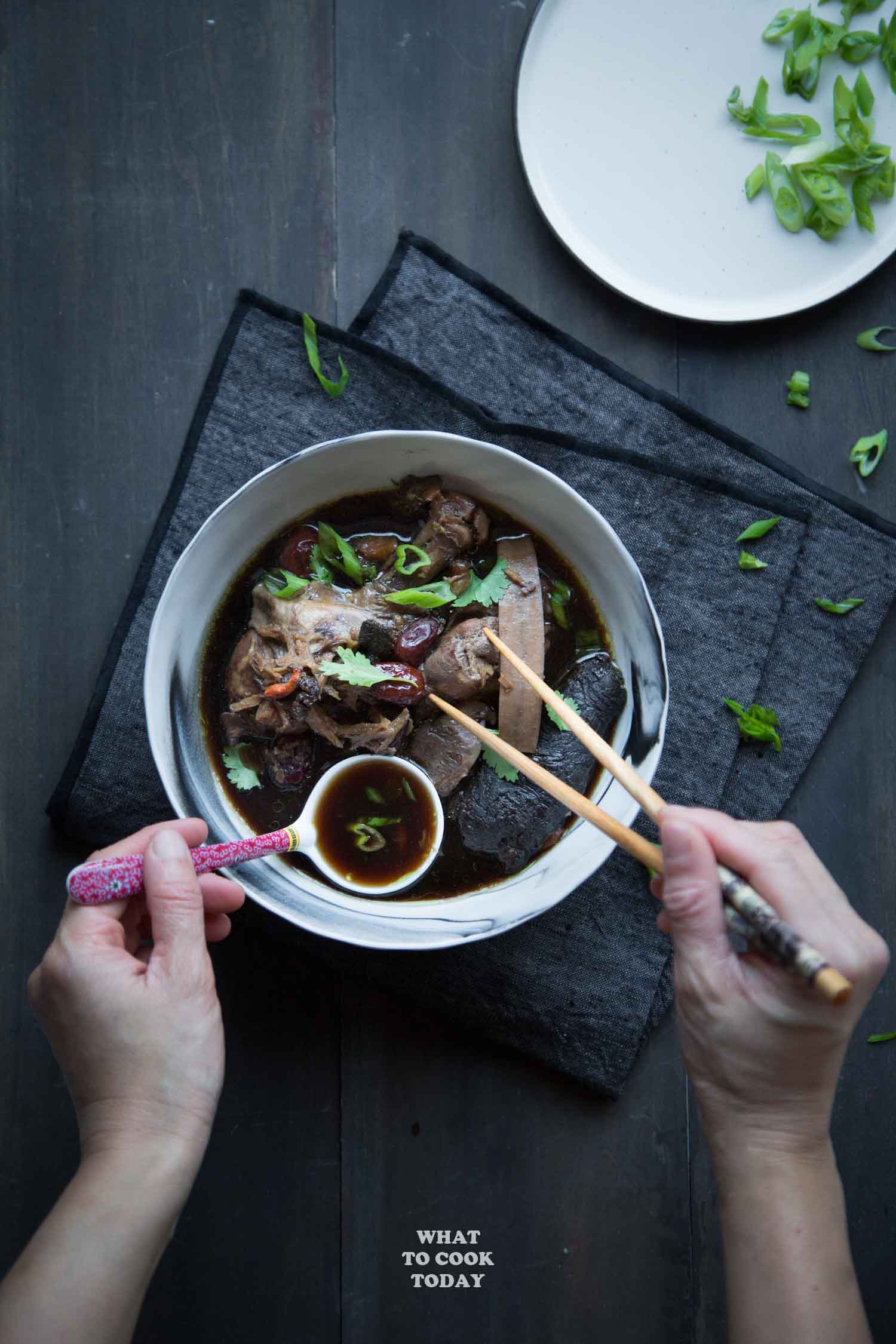 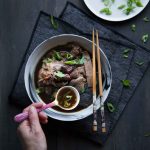 Hello MARVELLINA,
Thank you for sharing this great dish. Since I was a kid my mom always cooked us Sibut.
Been in love with the dish for 25years.
Is it okay to be given to a person who has chronic u.t.i? I’ll be looking forward to your reply.

Hi Kirstine, my mom made this often too when we were kids. I’m so sorry that I can’t tell you for sure whether it’s okay to give this to a person with chronic uti. I don’t think I qualify to do such suggestion as I don’t have enough knowledge with TCM. I know that we consume it just for general health.

Hello, i have a question, if I want to cook this soup for Vegetarian, which ingredients i should change to something else Vegetarian could eat? (I wanna make this for my mother and my old grandparents, so please respond to me, thank you very much).

Hi Jin, you can use ingredients like mushrooms, tofu puffs, extra firm tofu, beancurd sticks, and veggies like Napa cabbage, just a few examples. All these are great with soup. I hope this helps.

Hi! Is Sibut pack the same as herbal mix?

From what I understand is that in general, sibut is made with four-type of Chinese herbs, though some uses more than 4 sometimes. As for herbal mix, it is kinda broad though, there can be many different kinds of herbal mix.

Bringing you greetings from Canada. I love eating the Sibot but I am surprise that each country have a different composition of Sibot. The Phil. has a different one, HongKong is also different, Taiwan and Singapore also has different composition of their Sibot. As a child, my mom used to cook Sibot for us. But that was long time ago and can’t remember what herbs they were.
Would you know the original composition of Sibot? Some have the dried white yam in them and some have more than 4 herbs in the pre-mixed packages that are sold in the Chinese groceries and I would like to know what were the basic herbs for Sibot originally. Please advise. Thank you.

Hi Rosita,
I asked my mom before and to her these are the 4 basic sibut herbs: Dang Gui(Angelica Root), Shu Di (Rehmannia glutinosa)-which contributes to the black color of the soup, Dang Shen(Codonopsis Root), Chuan Xiong (Ligusticum Striatum). I’m not sure if this is the “true” original though.

Hi do you recommend kids to drink the soup?

My mom says it’s fine for kids to drink the soup. I grew up with this soup as a kid too 🙂

Is it okay to consume the cooked herbs or do you discard it?

Hi Kris, you can consume the cooked herbs. I do that 🙂 or you can discard them too if you don’t want to.

Hi! Thank you so much for this recipe! How long does this soup last in the fridge? Does it loose its benefits if in the fridge for too long? Also, will canning preserve this soup for longer? Thanks!

Hi Maya,
You can keep the soup in the fridge for about 3 days. If you want to keep longer, I recommend you portion them out into serving batches and freeze. They can be kept for up to one month. And of course the longer you keep things, more nutrients will be lost. Honestly, I’ve never tried canning this soup before, but from what I heard, if you use a pressure canner instead of boiling water bath, it should preserve the soup longer. The boiling water bath probably not safe enough for preserving soup that has low acidity. I hope this helps!

ROAST RACK OF LAMB WITH ROSEMARY AND TZATZIKI