General Tso’s chicken is the most famous Hunanese dish in the world. I was all curious because I knew nothing about it. Even during my recent visit to costco, the lady was cooking some “The General’s Chicken” and handing them out as samples. I tasted it and it was really good. When you bite into it, the chicken is crunchy and coated with sweet sauce.

Honestly, it wasn’t until I came to the U.S. that I heard and saw this dish on the menu and always assumed General Tso’s was invented only for the Americans. The truth to that is, my mom never heard of this dish and many Asians do not aware of General Tso’s chicken either (unless they’ve visited the U.S. and somehow saw this on the restaurant’s menu or eaten this before), otherwise, this dish is almost like non-existence in China and other parts of Asia home to the Chinese.

Most Americans I know enjoy this dish. Hunanese people have little interest in dishes that combine sweet and savory tastes. So, how in the world does this dish becomes so popular here in the states, but become an alien in the Hunan Province itself ?

If you are still with me, here’s the story. From what I read form wikipedia, The dish is named after General Tso Tsung-tang, or Zuo Zongtang, a Qing dynasty general and statesman, although this connection is tenuous. He is said to have enjoyed it, and perhaps helped create a dish, but there are no recorded recipes. The real roots of the dish lie in the post 1949 exodus of chefs to the United States. The dish is reported to have been introduced to New York City in the early 1970s as an example of Hunan cooking, though it is not typical of Hunanese cuisine, which is traditionally very spicy and rarely sweet.

A guy named Peng Chang-Kuei claimed to be the one who invented this dish after he immigrated to the U.S, New York, to be exact. The original version of course was spicy and not sweet. He later altered the recipe to suit the taste of the local and made it sweeter. Today, you’ll see General Tso’s chicken almost in any Chinese restaurants here in North America. Even the fast-food eatery that serves “quick” Chinese food, has General Tso’s chicken. Most adults and kids enjoy this dish because the altered version to suit the Americans’ taste is crispy and sweet. I decided to make General Tso’s chicken too. After all, this blog is not complete without having something that is so popular and easy to make. 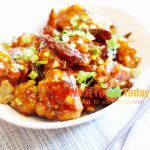 It makes sense that people like General Tso chicken because it’s crispy and sweet. I love Chinese food, but I’m really bad at cooking, even though this recipe looks simple. I’m craving General Tso chicken now, so maybe I’ll find a Chinese restaurant for tonight.