One of my most fond memories from childhood was the late supper we often had. Some food stalls started their business at late hour around 9:00 pm or later. These are the late night street food and I’m always thrilled whenever my dad rode his scooter to somewhere nearby and got all of us some grubs. Sometimes, either my brother or me would walk to nearby places to get them. It’s not so much of the eating (though of course I won’t deny I love the food we had), it’s just so fun sitting together sharing our food sometimes even fought over the food. I might have some noodles, while my brother might have satay and my sister might have something else. Though you may think that’s kind of “heavy” eating for late night, this was actually very popular, in fact still is in Asia. At certain streets, the later it is, the more crowd there are coming to have some good food.

When I saw this barbecued lamb chops in Revolutionary Chinese Cookbook by Fuschia Dunlop, the dish reminded me of the late night snacking. This barbecued lamb chops is from Yue Yang, one of the cities in Hunan province in China. People like to go to this barbecue restaurant at the tucked-away corner in the middle of the town to have barbecued meats. The meats are rubbed with Yue Yang style seasonings (five-spice powder, wine, sweet bean sauce, cumin, chili flakes) and then seared on the pan which resulted in a beautiful spice crust. Like, Fuschia Dunlop, I like my meat still pink and juicy inside. Of course, this type of medium rare cooking is not common in China because people should be eating fully-cooked meat. Even my mom agrees to this. I guess it must be the Western influence that has somehow changed my preference, but I really don’t mind it because I really enjoy eating it that way. 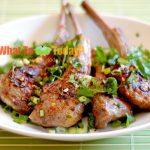 6 Unique and Easy Mooncake Recipes You Should...