If you look at my noodle archive, you will know that I’m pretty much a noodle enthusiast! lol! I love noodles and every cookbook that I tried, I often make sure that I give the noodle recipe a try. My daughter is a noodle lover too. The girl asks for noodles everyday (I wonder where she got that from. ha!)

I’m still venturing with Fuschia Dunlop’s Revolutionary Chinese Cookbook, which focuses on food from Hunan Province in China. Like gazillion varieties of pasta available out there, it is the same thing with Chinese-type noodles. Fresh and dried. Some made with rice, some made with eggs, some made with wheat, some made with beans, etc.

Hunanese noodles usually uses rice noodles or known as (ho fun). The noodles are usually prepared first and then lightly seasoned and then top with stew-type topping, or stir-fry of meats and some blanched vegetables. Simple but very satisfying. Generally are healthy, of course this also depends on the type of toppings you put on it. This noodles with fresh shrimp and baby greens is one of my favorite. I like the usage of black vinegar in noodles. It does taste sour, but crazily good to me!!! It’s addictingly good ! 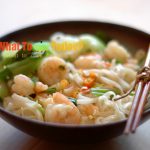