Dong’an is one of the counties in the Hunan province and the Dong’an chicken is one of Hunan’s most famous dishes. The chicken is a delicate concoction of chicken flavored with chili and clear rice vinegar that is said to have originated in Dong’an county. It’s precise history remains unclear, and some sources said that it is based on a dish called “vinegar chicken” (cu ji) that was eaten in Dong’an county during the Tang dynasty back in the eight century.

The are two different versions of stories shared by Fuschia Dunlop on the tale of how “vinegar chicken” eventually became known as Dong’an chicken. The first version is the Qing dynasy military commander named Xi Baotian loved this dish and often served it to his guests at banquets. Xi Baotian was from Dong’an and people started calling it Dong’an chicken.

Another version is that after the success of the Northern Expedition in 1972, a Nationalist army commander, Tang Shangzhi, served “vinegar chicken” at a banquet in Nanjing. His dinner guests were profuse in their praise, and asked what the dish was called. Tang felt that the original name was a bit blunt and inelegant, so he told them it was called Dong’an chicken, and the name stuck until today.

This recipe was from one of the great Hunanese chefs who used to cook for Chairman Mao Zedong. Try it and you will find it delicious!!

This recipe and part of the story are adopted from Revolutionary Chinese Cookbook by Fuchsia Dunlop, published by Norton (US)/Ebury Press (UK). www.fuchsiadunlop.com 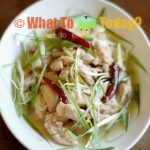 How To Make Nasi Goreng Rendang (in Less...