I was always curious about these green-looking tomatoes or known as tomatillo in Spanish. Never had it before (at least not that I’m aware of) until these past 2 years probably. I never seen green tomatoes. My mom said she had never seen one before too until she came here. I’ve experimented with few recipes using green tomatoes since then and this is one of them. 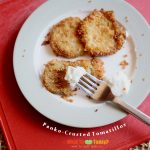 Opor Ayam (Instant Pot or On The Stove)