Okay, First of all, I know that title is a mouthful. Second of all… cloud ear fungus ? What in heaven’s name is that ? and am I suppose to eat that ?

Cloud ear fungus is very common in Asian kitchen and it is also known by many names such as wood ear fungus, black ear fungus, ear fungus, etc. They do shape like an ear. If you understand Hokkian dialect, this is also known as “bok ni” or in Chinese “木耳” Usually being sold in dried form. Once you soak them in water to rehydrate they plump up twice or thrice the size when they were dried. It has no taste whatsoever, crunchy in texture and can endure long hours of cooking without losing its crunchiness. When you use them in cooking, they absorb flavor from others. In Southeast Asia, cloud ear fungus is often used for stir-fry and soup.

Which is why I found this vermicelli soup with cloud ear fungus or known as kyasan chet in the Burmese kitchen as well. This soup has a real strong kick from the red chili paste and ground black pepper. So, if I have one piece of advice to give you before you try this, consume the soup slowly and don’t talk much because I don’t want them to go down the wrong tube, in which the result may not be so pretty in sight! If you know me, I’m in for this kind of soup though! I like hot spicy, numbing sensation chilis and peppers give. Well, this soup is not numbing like what Szechuan peppercorns can do, but still, it’s peppery and it will give you a good kick if you need it 😉 You can choose to cut down on the amount of ground black pepper, but that’s what I like about it from this soup though 🙂 This kyasan chet is very popular among the Burmese and often served on ceremonial occasions. 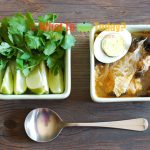