Yin Yang Vegetable dumplings-Colorful vegetables and shreds of omelets are stuffed inside these dumplings served with soy-vinegar dipping sauce. Yin dumplings are steamed and the Yan dumplings are shallow-fried. These are seriously so good! I grew up watching Martin Yan’s show Yan Can Cook. I’ve adored him even before I was old enough to be in the kitchen, cooking. He is a legend to me. I learned how to make this Yin Yang Vegetable pockets/dumplings, as he named it, from him. In Chinese culture, the name of the dish is as important as the taste of the food itself. These Yin Yang vegetable dumplings represent the creation of pocket of balance. THE IDEA BEHIND YIN YANG DUMPLINGS
Quoting from his cookbook, in Chinese Philosophy, the universe operates as two opposing but complementary principles. Yang, meaning fire, light, and dominance and Yin, meaning air, water, and submission. When balanced, these principles coexist productively: Yang creates ideas and yin produces material forms. The dominance of one over the other creates an imbalance. This dish represents the principles of yin and yang. The textural differences provide a balance of crisp and delicate, crunchy and soft, pan-fried and steamed. I love the dumplings from this recipe and the dipping sauce is really good too. I like the sourness from the vinegar, the hint of spiciness from the chili, the flavor from soy sauce…. try them and you’ll know what I mean 🙂 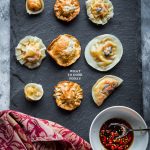 Hi Chris, yes, you can definitely use wonton wrappers too.

NEED RECIPE FOR THE DOUGH USED IN MAKING POTSTICKERS

I used a store-bought pot-sticker wraps

My wrapping at the edge can definitely improve more, I’ve never really done “pie crust” sealing at the edge before lol! I’m sure you will do a good job at that 😉

I am going to try this!

Another gorgeous dish that sounds delicious! I might even be able to make those pockets. Mine won’t look as pretty as yours but I guess practice makes perfect :o)