Well, here’s another post of noodles again (I’m not sure if I’m even sorry for it!). Ever since I learned from my mom that I could pretty much make my own noodles many years ago, I tried to make my own noodles when I have the time to do so. It is convenient to be able to just get the store-bought ones, but I usually get turned off by the list of ingredients used to make the noodles. Lots of preservatives and additives. Of course, these days the option for noodles made with only natural ingredients are widely available now, but let me tell you that making your own noodles can be an addicting activity (except for making Japanese ramen noodles! I will never do that by hands! EVER!) Chinese five-spice powder is basically made with cinnamon, fennel seeds, cloves, star anise, and Sichuan peppercorns. The aroma of star anise and cinnamon is most distinctive though if you ask me and it’s not numbing if you think because there’s Sichuan peppercorns in there. Thin or Thick noodles…it’s your call !

I am no expert in noodle making, but I like to use bread flour when it comes to making noodles because it has higher protein compare to regular all-purpose flour, which means more gluten. Gluten will give you that chewy and stringy texture, which is what I love with noodles. 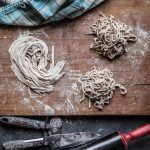 I have to admit that I don’t cut the neatest noodles in the whole wide world, but they still turned out pretty good ! I’ve never successfully made noodles! I’m going to have to try this recipe. I really enjoy all your photos, you’re really inspiring! I’ve only just moved to Minnesota, and it is great to see a blog this amazing and maybe someday I’ll be up to your level too.
Thank you!

Hello there!! So happy to know another Minnesotans here 🙂 You are too kind and generous with your praise!!! I definitely still have A LOT to improve and if you happen to see my photos from back in 2010 (when I started blogging), you will definitely agree that I have come a long way ha..ha..ha…!!! Not only you will be up to my level, you will be above!!! Thank you for stopping by!!!

Love this recipe! I love the smell of 5 spice but struggle to find ways to use it that aren’t too overpowering.

I agree. On its own it may be too overpowering and a little sure goes a long way too

Thank you, Marvellina –yum. looking forward to trying this out.