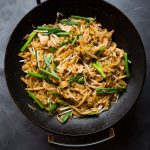 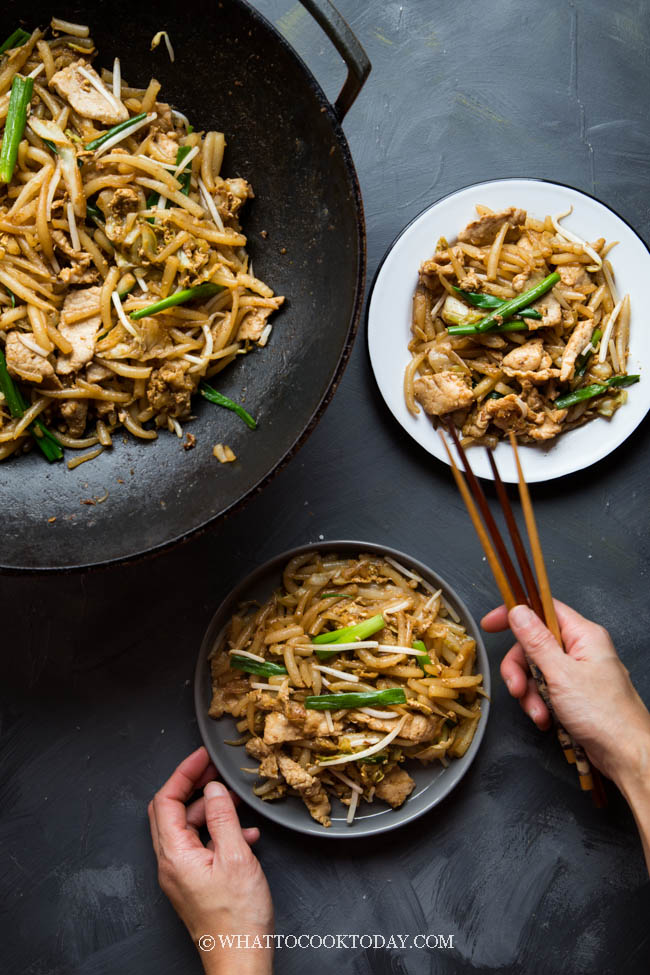 There are several different writings that I saw for lort cha. The restaurant we went to call it lot cha. Some wrote it as lod cha and loht chha. They are the same things. I suspect the “cha” or “chha” may mean “stir fry”. Just my guess because that’s what it means in the Hokkien dialect “char” 🙂
Lort cha is basically Cambodian-style stir-fried short rice noodles (rice pin noodles). Similar to the Vietnamese Banh Bot Loc rice pin noodles (which was what I used in this recipe) and also the stir-fried mee tai mak that is more popular in Singapore and Malaysia. Both use the short rice noodles. 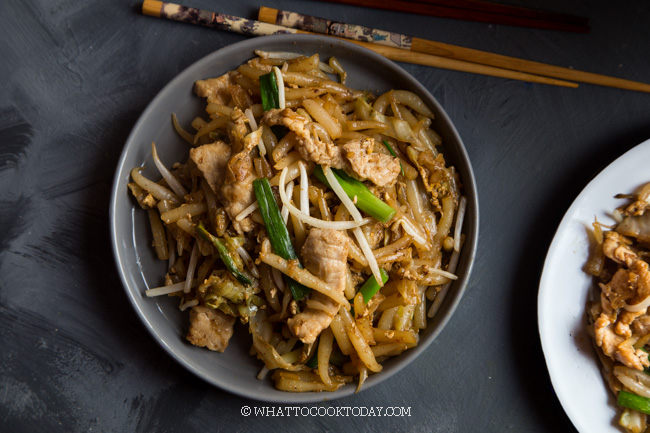 Let’s talk ingredients shall we? Lort cha is simple stir-fried noodles to make. Ingredients for the protein and vegetables can be swapped as you wish too. Nothing fancy really!
1. SHORT RICE NOODLES
You can easily find this in most Asian grocery store. I got the Vietnamese Banh Bot Loc (Rice pin noodles). Some people may blanch the noodles briefly in hot water. I don’t feel like it’s necessary to do so.
2. SEASONINGS
Oyster sauce, fish sauce, dark soy sauce, and a bit of sugar. This combination of seasonings adds amazing savory, sweet, and umami to the finished dish
3. CORNSTARCH
I often use a bit of cornstarch to marinate meat (most Asians do). It helps to tenderize the meat
4. AROMATICS
Garlic and green onion. The green onion is separated into green and white stalks. The white stalks are firmer and can withstand heat and that’s why we stir fry this part first with the garlic. The green part is more for “garnish”
5. PROTEIN
I use sliced pork tenderloin and eggs. Feel free to use beef or chicken if you like. If you prefer meatless, you can just use eggs or fried eggs.
6. VEGETABLES
I use sliced cabbage and fresh mung bean sprouts. The mung bean sprouts add nice contrast of texture to the dish. You can use fresh greens like Chinese broccoli, yu choy, broccolini, bok choy. Just to mention a few. 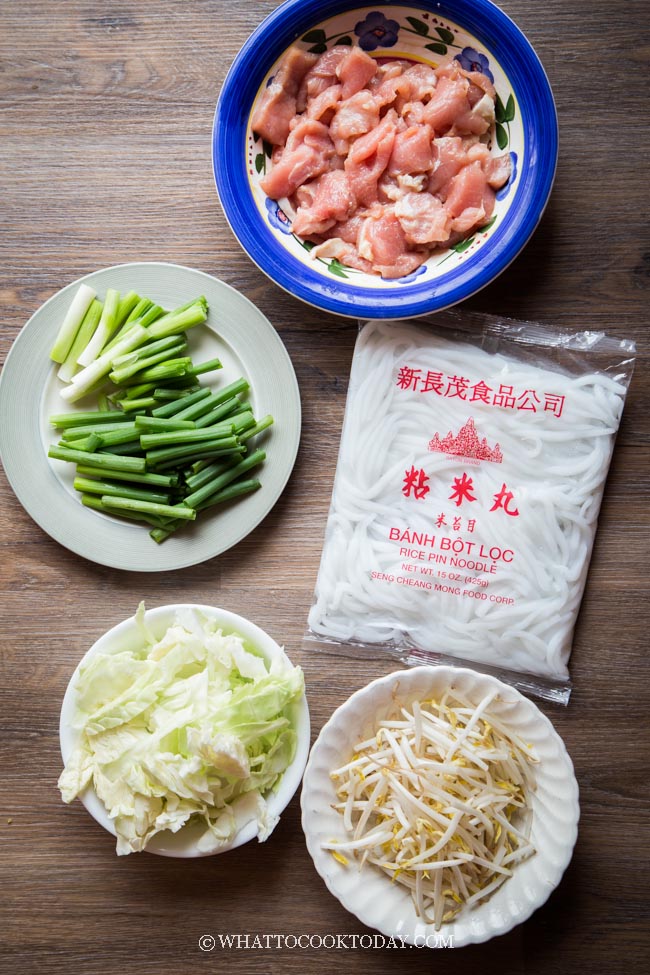 HOW TO COOK CAMBODIAN LORT CHA IN 4 SIMPLE STEPS

STEP ONE: MARINATE AND COOK THE PORK FIRST
1. Thinly slice the pork tenderloin and then marinade for 15 minutes at room temperature
2. Preheat your wok/skillet until really stonking hot and then add cooking oil and cook the pork slices and then remove from the wok/skillet 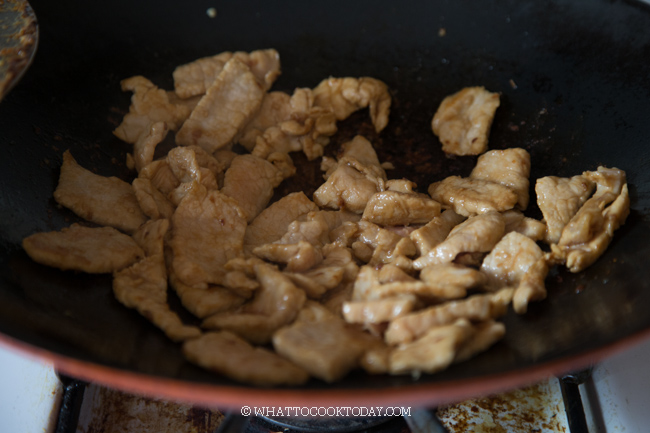 STEP TWO: COOK THE VEGGIE AND EGGS NEXT
1. Wipe the wok/skillet clean if needed. Add cooking oil and bring it back to hot. Stir-fry aromatics until really fragrant 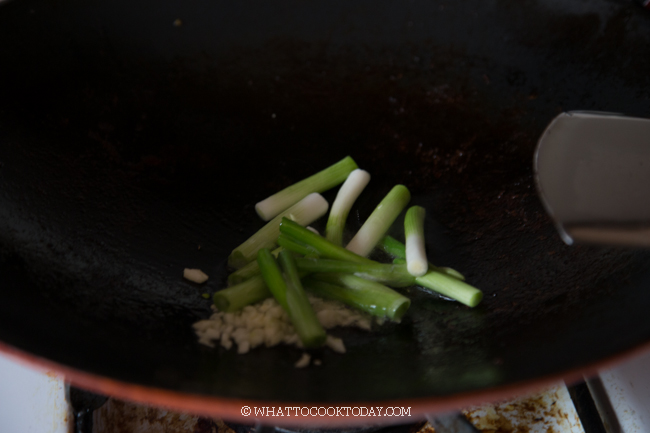 2. Add the cabbage slices. Stir fry briefly and then add some hot water and cover the wok/skillet with the lid. This will stirfry-steam the veggie to help soften it a bit 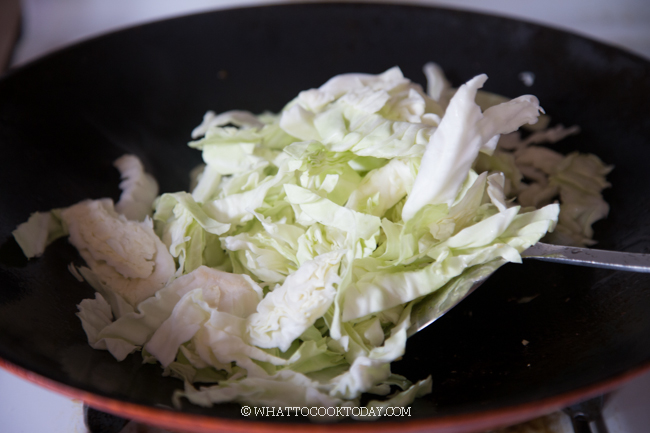 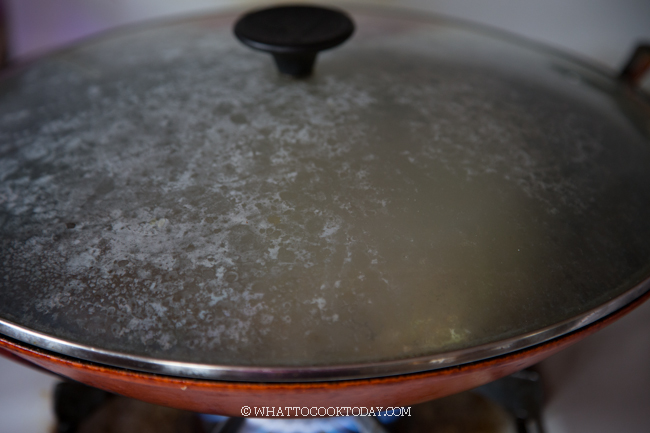 3. Uncover the lid and cook until all liquid has evaporated. Push the cabbage to the side of the wok and then crack in two eggs. Let them cook undisturbed and then scramble the yolks and start stir frying 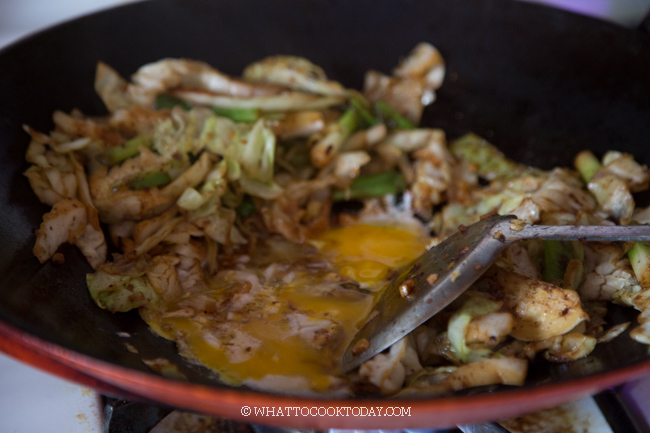 STEP THREE: COOK THE NOODLES
1. Add the rice pin noodles. Use your hands to gently separate the noodles. They will be in chunks. Don’t worry. There’s no need to pre-cook the noodle first
2. Add seasonings and then stir fry to mix the seasonings with the noodles 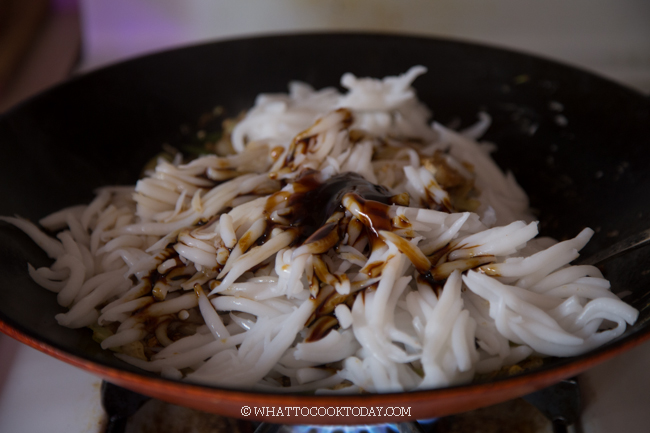 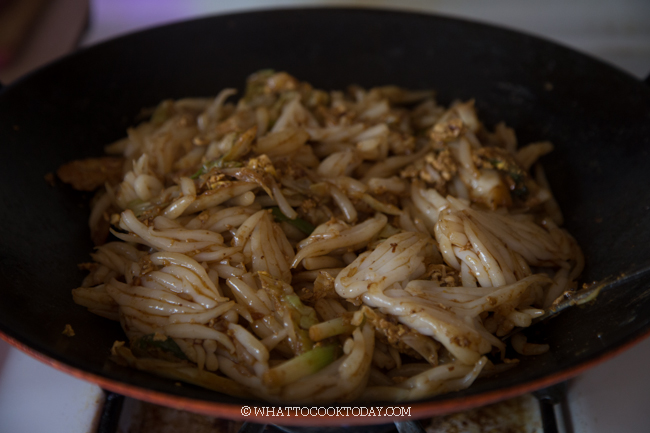 3. Add a bit of hot water and then cover with the lid to let the noodles soften, about 1 minute 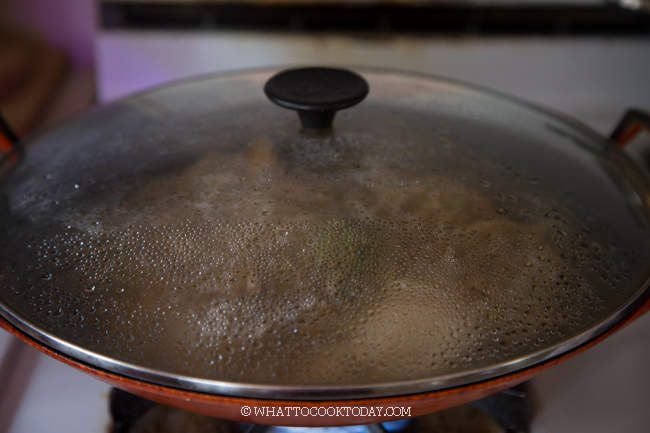 STEP FOUR: COOK WITH RESIDUAL HEAT
3. Uncover the lid, add pork slices back along with the mung bean sprouts and green onion. Turn off the heat and continue to stir until the green part of the green onion soften slightly and the bean sprouts are cooked but still crunchy 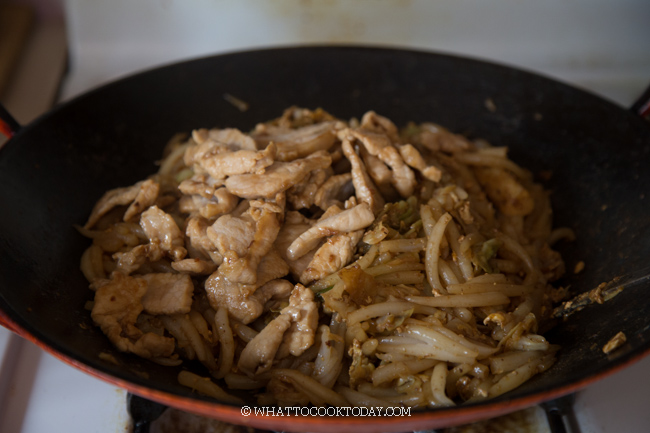 And here you are, Lort Cha is ready to be served!! 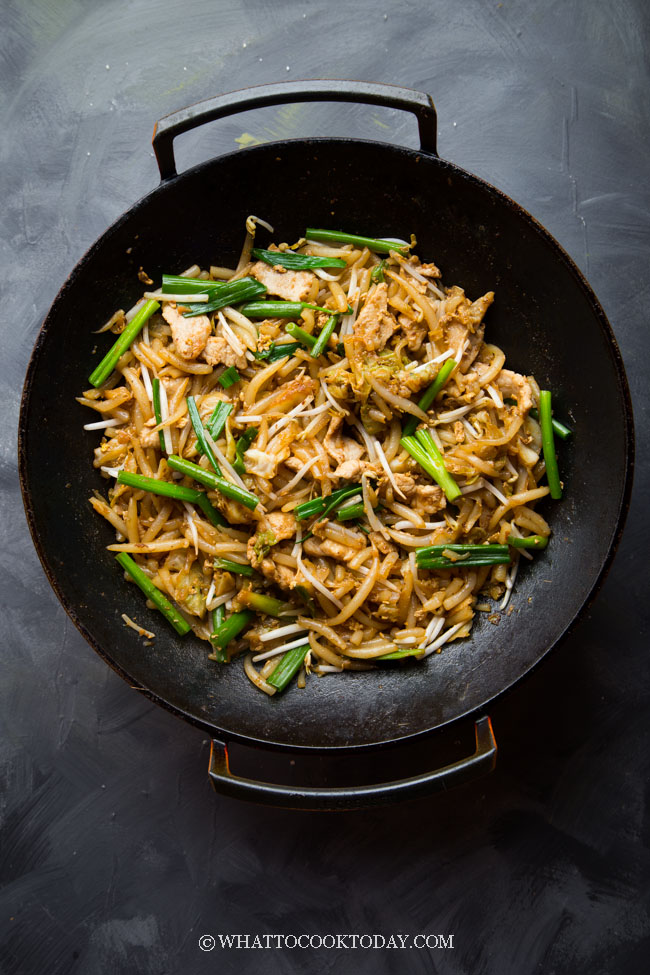 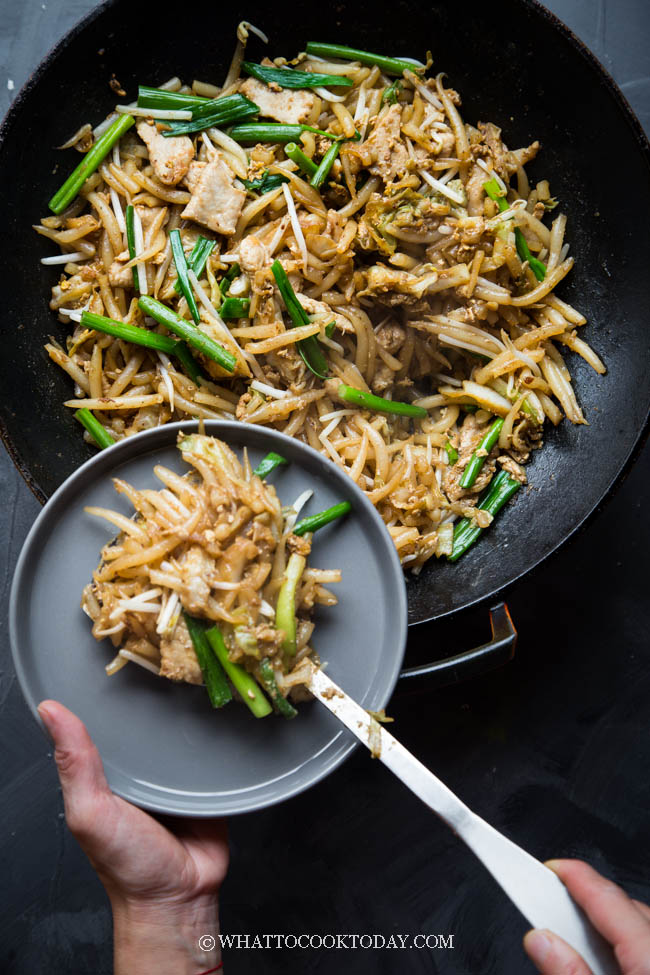 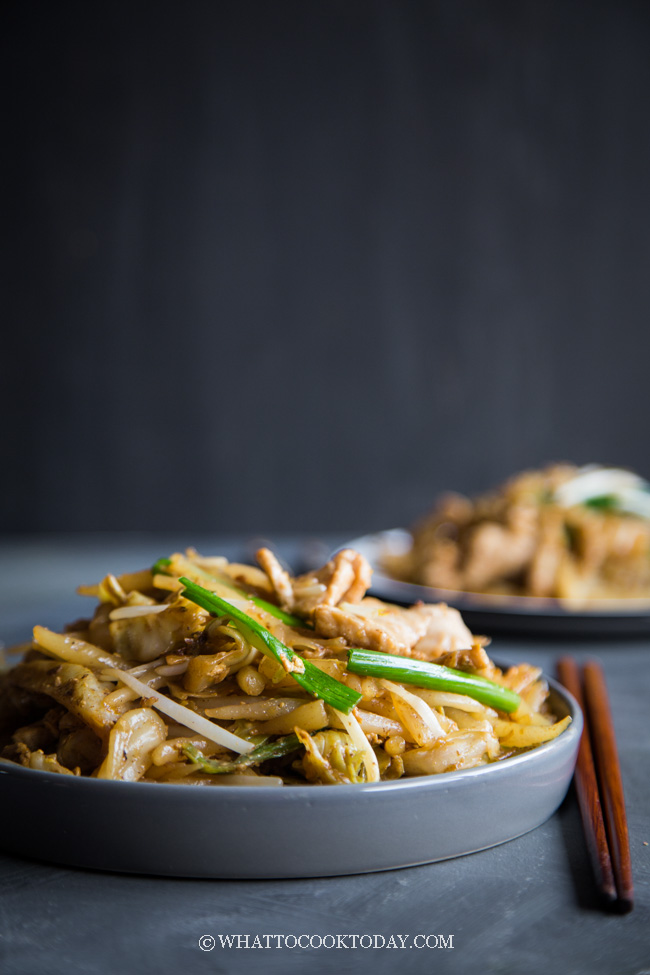 1. Wok/Skillet with a lid
I like to use wok/skillet that has lid because in this case it helps to stir-fry and “steam” at the same time. It keeps the recipe simple and everything can be cooked with only one wok/skillet. We don’t have to precook the rice noodles and veggies. I use Le Creuset wok with a lid but feel free to use whatever suits you.
2. Metal Turner
I simply can’t do any stir-fry without a metal turner 🙂 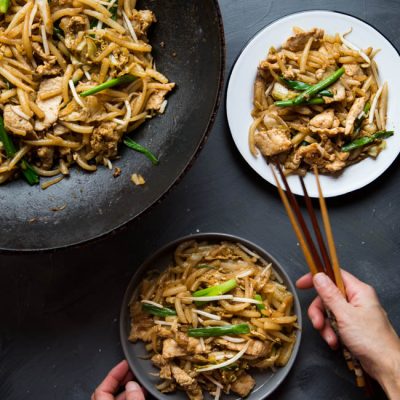 Marinate pork and get things ready:

Cook the veggies next: 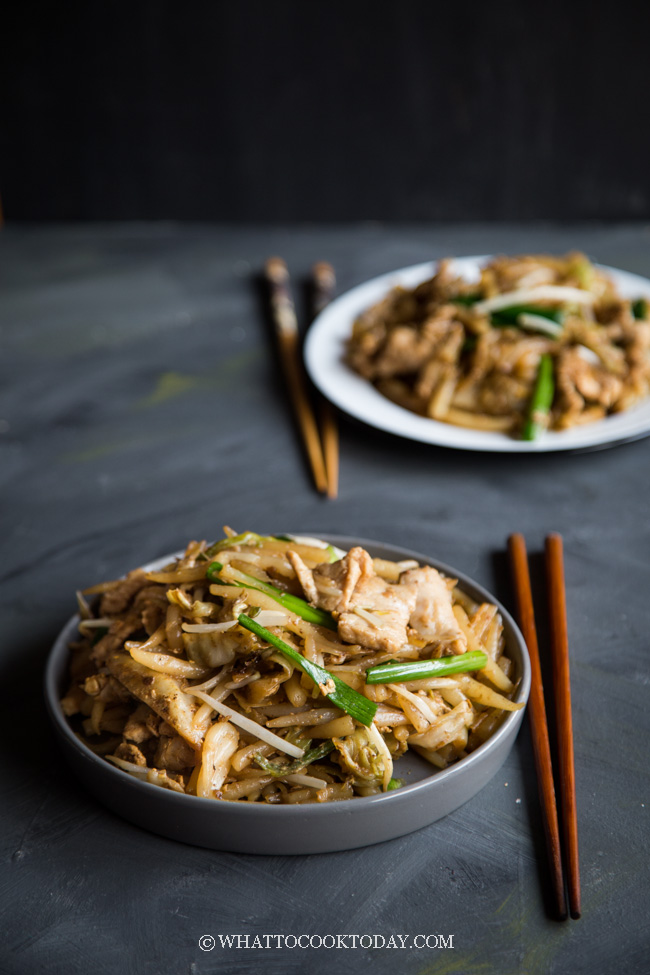 I’m Cambodian American and wanted to confirm that “cha” means stir fry in Khmer. “Lort” refers to the short rice noddles. We also have a dessert called “lort” which is essentially chendol. The Cambodian version is served without sweet red beans. Thanks for sharing the recipe! :0)

Thank you Rothana. I’m glad you find it useful 🙂

Hi!
This looks like a great recipe! I have one question…. I used to work at Le Creuset, and we always told customers not to use metal utensils with their cast iron, as it could scratch the finish and cause the cast iron to rust. You are obviously used to cooking using both, your wok looks well loved! Have you found any issues with scratching the enamel? or the seasoning layer?
Thanks!

I certainly have no issue with using metal utensil on my Le Creuset. I didn’t see any rust on it. I do have a habit of rubbing a thin coat of cooking oil on the wok after I dry it and ready for next use.

I am in love with Cambodian food! We don’t have much of a selection where I live either, but a short drive up to LA and there’s a lot! This is a great recipe! But I realized I do not have a lid for my wok – I totally need to get one.

If you don’t have a lid, you can still make this. Just quickly blanch the noodles in water before stir-frying 🙂

It sounds and looks delicious, I would love to make this, especially since the ingredient list is rather doable even for me, here in Germany. 🙂 So lucky to have access to such restaurants, I can only dream of that. The biggest achievements are one Indian and one sushi restaurant, both 60 km away in opposite directions.

Ouch…60 km away! I would be crying hard for not having access to Asian restaurants and ingredients 🙂 But again, your cooking sure makes up for it 😉