Capuns is a traditional Swiss dish from Graubunden canton in Switzerland. As described in the title it is pretty much a meat incorporated in a spatzli batter (type of soft egg noodles found in Switzerland and other parts of Europe) wrapped in Swiss chard leaves and then cooked in butter and gently simmered in cream and stock. Sounds pretty yummy isn’t it ? It is yummy. It’s like eating your noodles with meat wrapped in vegetables and then that crispy bacon gives it a nice contrast in texture. If I need to sound off any complaint at all, it will be working with the chard leaves. Well, it wasn’t difficult. I’m not a very gentle kind to be honest, so, some got torn. Other than that, it is pretty straight forward. Another recipe from A Taste Of Switzerland by Sue Style. 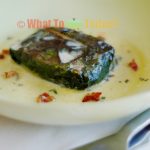