I think for 35 years of my life so far, I’ve only eaten nacho like maybe….once ? ha.ha..! I’m not a big fan of nacho itself, which is pretty much tortilla chips topped with melted cheese and jalapeno peppers. Some goes to the extend of adding some sort of meat too. I mean… I don’t hate it. It’s just not something that will pop up on my head “hey…I want to eat nacho” 😉
However, if you make it into a meal (yes, we’re talking now) then you’ll hear me talking. This chicken nacho soup is inspired by the nacho itself of course, with the addition of the chicken. It is super easy to make and you can see lots of varieties out there. I think mine is a little bit at a “healthier” side 😉 though still tasted really good. 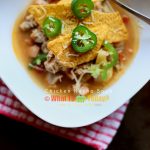 Stack it up with RITZ Original Fresh Stacks...