If you haven’t read enough of the word kimchi this week, well, here’s another one, cucumber kimchi/oi gimchi. This cucumber kimchi is popular during summer time. The refreshing coolness of cucumber paired with some heatness from the chili is a great combination. I like when I bit into the cucumber, it is still very crunchy regardless of the fermentation process it went through. Give it a try I would say. It really is pretty easy to make and something new and different every now and then is a good thing.
Recipe from Quick and Easy Korean Cooking by Cecilia Hae-Jin Lee. 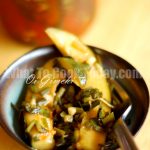