The idea of cooking a whole chicken can be intimidating to some people. Well, I was one of those people (at the beginning of my journey into the kitchen). I still kinda get overwhelmed sometimes when it comes to handling a big bird like that. Cornish game hen or known as poussin though, is more manageable in my humble opinion. They are smaller and easier to work with. Most of the time they already came cleaned up for you too. I’ve been cooking so much, but still removing guts and internal contents of chicken seems to be a bit scary to me. So, I thought, well..let’s do cornish game hen then!

This pot-roasted cornish game hen can’t be more delicious. I’m never a big fan of breast meat, but this pot-roasted thing really result in tender and juicy meat! I was a bit hesitant how my husband would react to the whole dish, but he couldn’t stop licking fingers! So, I figured that was really a good sign!
The sauce is slightly sweet and tart, kinda like a sweet and sour orange chicken (though not as sweet), but in a different look and presentation and with that hint of citrus. I would say…give it a try 😉 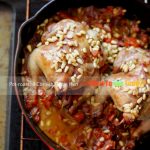