After I saw several good people posting about how you can make your own facial mask using gelatin on pinterest, I headed to the store and got myself several boxes. I was determined to rid this black heads and improve my facial complexion. Little did I know that I would only do it couple times and never kept up with it. Why don’t you keep up with it woman ? I should, but in reality it doesn’t always happen. If only I can be so committed to it like I would when I was baking that rainbow cake that will brighten up anyone’s life. But, let’s face it…No. So, gelatin likely enough to mask the entire human body. I took a peek into the pantry and saw the rose water syrup that I brought from the Indian grocery store a while ago. I had no plan of what I would do with it at that time, but I thought I’d like to make use of that one day. So, pair the two, I thought I could try to totally make up something that hopefully someone will eat.

I opened up the rose water extract and had a sniff. WOW !!! smells like a perfume! I started to have this doubt about infusing my food with a perfume. It is very fragrant, don’t get me wrong!! But..what the heck..I go ahead with the master plan. A master plan inspired by a dessert that I used to eat so much growing up, soy bean curd. Known for its silky smooth and melt in the mouth texture usually serves with ginger syrup. This is popular dessert in Asia. So, I thought, let’s do this! Let’s make something like jello, but using cow’s milk because that’s what I have in the fridge. I was telling myself this was going to be a big bowl of mess I was trying to create! Went ahead anyway. The next day when I had a taste of it with the rose water syrup, I know I can convince the family member to eat this! I know it ! So, I did some photo shoot and called my willing-to-work-for-food 2-year old to try. The first taste and those eyes grew so big that I thought he was about to spit it out on my face. “I want more”. He finished two bowls. TWO. Next target was my will-do-anything-to-avoid-trying-new-food 5-year old. This was what I told her “It’s a milk pudding” She said “Milk pudding?” what is milk pudding? So, she took the first bite without much resistance to my surprise. “Yummy mom, so smooth”. The husband loves it too. WOW ! So, I guess mission accomplished !! 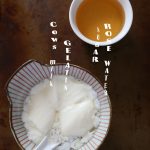 SPAGHETTI WITH SHRIMP AND WATERCRESS

The Best Soft and Moist Lychee Cake Ever

Kid-approved, this must be good! Sounds delicious! 🙂