Roasted spaghetti squash served with aromatic ginger broth, crispy garlic, tender slices of chicken, and fresh herbs will be one of your favorite comfort food. Speaking about procrastination, these almost-forgotten spaghetti squash chicken ginger noodle soup photos have been sitting in a folder for almost a year now! In fact, I have so many foods that I’ve cooked that I haven’t even published on this blog yet. One day people..one day they will show up here! I tried spaghetti squash last year and I have to say that I got hooked ever since. I have a weakness for anything that looks like strands of noodle. This strands of spaghetti squash don’t even taste like noodles, but the resemblance gives me that noodle placebo effect if I can put it that way. I love to make a stir-fry with it, “noodle soup”, or tossed them with sauce to resemble a tossed noodle. 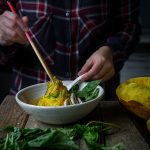 Preparing the broth (can be prepared the day before):

Making the chicken broth may sound like a lot of work when you look at the recipe, but actually, it’s not and trust me, no store-bought chicken broth can compare to homemade one period! They can be made ahead too. I now look forward to spaghetti squash when it’s in season! Looks like the perfect heart warming dish for fall!