Spaghetti Squash is tossed in Spicy Asian Sauce made of Sambal Oelek and other seasonings and served in the squash bowl makes eating just so much more fun. What ? You categorized this under noodles ? is probably something you would say 🙂 No, it’s not a noodles I know. I haven’t lost my head yet though some days I seem to leave it somewhere! Just humor me and let this stays in the noodles category. I just love combing those strands of squash with a fork. I seriously do! I don’t know if because it looks so much like strands of noodles/pasta or what! I’m a noodle freak and there’s no secret about that. I love eating them too is probably more important than just combing it with a fork. It’s squash. It’s good for you. It’s loaded with nutrients (sounds like a sales pitch I know!). Even better that this squash looks like spaghetti. They say you eat with your eyes first and that’s exactly the case for me here! I’m also a sucker for fusing flavors from different culinary background (East meets West kinda thing to make the story short. Or they call that food mashup? Anyway, You get it!). I used almost the same ingredients I did with my Super Simple Spicy Tangy Noodles. I used Sambal Oelek (pronounced as: oo-lurk) this round. Oelek (Ulek in modern writing) means to grind. Traditionally, most sambal and sauces or grind using mortar and pestle in Indonesia. I use food processor (because I can and because I’m lazy). So, the Sambal Oelek adds some extra kick of spicyness to the squash. You can totally skip this if you don’t want it spicy. My kids can tolerate a little bit of spicyness, but I don’t make it too spicy for their portions either. I think this is a great way to serve as side dish, or as partial substitute for pasta/noodles (if you are trying to cut down or carbs). They are super easy to make too! and have I mentioned highly versatile too ? You can toss them in whatever sauce or no sauce if you want! I’ve served them as “noodle” soup too (coming up on that one!) It’s just fun eating right off the squash “bowl” too! 😉 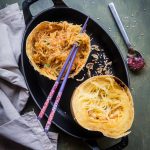 ZUCCHINI WITH QUINOA AND PEANUTS PANCAKE

A KILLER MAC AND CHEESE

Hi again Marv!
I tried this recipe yesterday, and uh i failed haha. I couldnt comb the squash and make noodles out of it. I think it was too soft. I guess my squash was smaller than suggested.
The sauce turned out great tho! Loved it, flavorful! It turned out to be a good companion for our hainanese chicken rice. Yum!

Hi Ayuta, Oh no!! sorry to hear that!! At least the sauce went with your Hainanese chicken rice LOL! Try to shorten the cooking time next round, if your squash is much smaller, you can probably check at around 30 minutes or so

This was a nice way to enjoy spaghetti squash! I’d recommend taking the seeds out before roasting it. I find it a bit easier to remove the seeds before roasting. Once you make it, you’ll realize that it’s a blank canvas only limited by your creativity!

Hi Ronny, Thank you for sharing, I would definitely try taking the seeds out before roasting it next time. You are right, so many things you can do with the squash!

So, what’s the texture like (after you roasted it)? What does it resemble?

Hi Tuty, the texture is still like squash, but not mushy