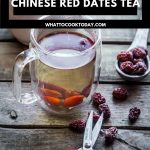 Nourishing and easy Chinese red dates tea recipe can be made on the stove or instant pot pressure cooker. 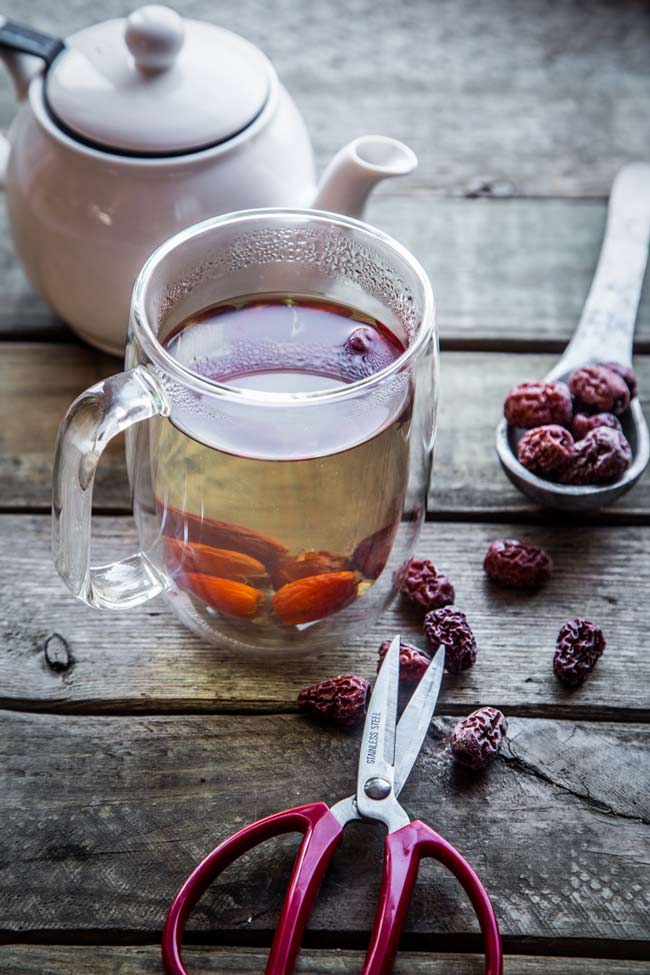 I was almost towards the end of eighth months of pregnancy when I initially wrote this post. My mom called me and asked me if I have any dried red dates (jujube) in my pantry. I normally use red dates for cooking Chinese traditional herbal soup, so the answer was YES. I was told that at around 34 weeks of pregnancy, is the perfect time to start drinking red dates tea daily. 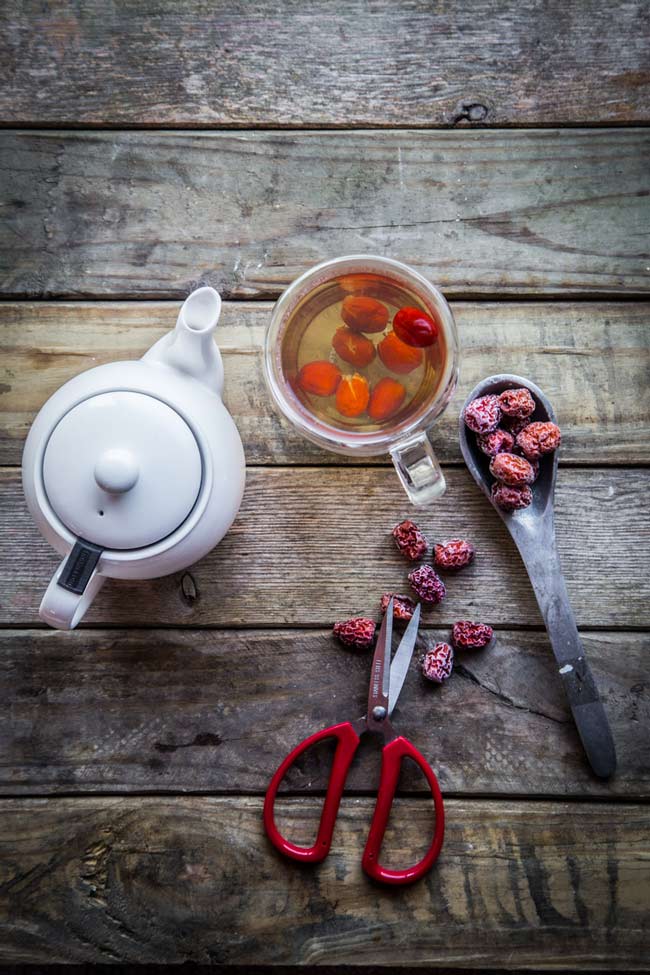 Red dates are known to have an anti-inflammatory effect, good for overall skin complexion, improve digestion, improve relaxation, and help to ease ailment such as sore throat

The Chinese also believes that Red Dates have “tonic” effect on the liver for a pregnant woman (not earlier than 34 weeks) and also to the baby. Some researches have shown that red dates help with easier labor and delivery

For confinement or post-pregnancy

It is also believed that post-pregnancy, the body loses “heat” or the Chinese often call “Qi”. My mom prefers to make this Black dates ginger goji berry and dang shen tea instead of just red dates tea for confinement as it is more “heaty” and helps to restore “Qi”. The tea is consumed daily, almost replacing the amount of water you drink daily 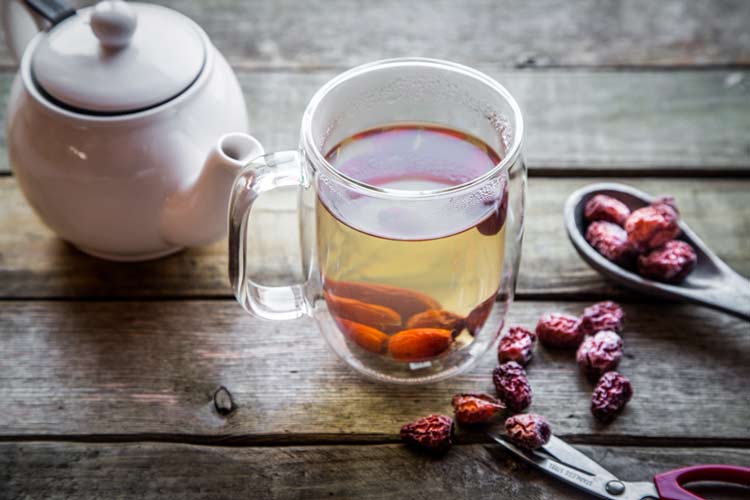 WATCH HOW I MADE CHINESE RED DATES TEA

1. Rinse the dates cleaned with water. You don’t need to core the red dates and just leave the pits inside 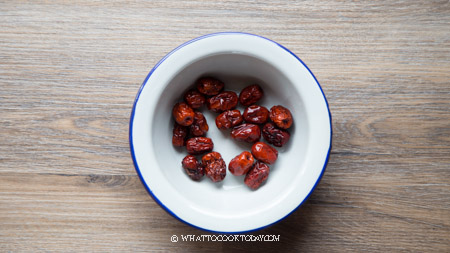 2. Take each date and use a pointy scissors or a small paring knife to create few slits, around 5-7, around the edge on one end of the dates. This helps to release flavor and nutrients to the tea 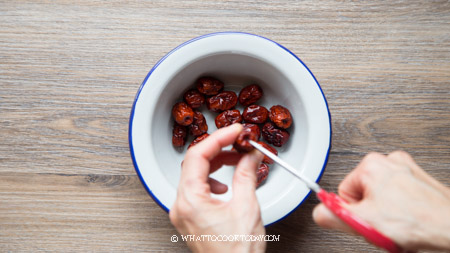 3. If cooking on the stove: Place the red dates in a saucepan. Pour in water 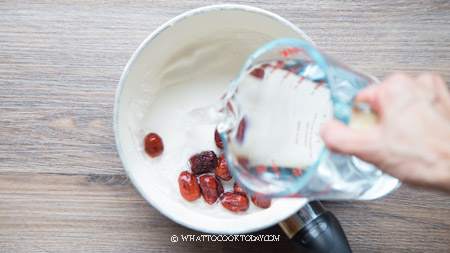 4. Bring it to a boil and then lower the heat to low, cover with a lid and simmer for the next one hour 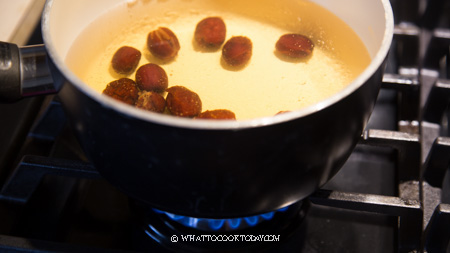 5. If using Instant Pot pressure cooker: Place the red dates in the inner pot of Instant Pot. Pour in water. 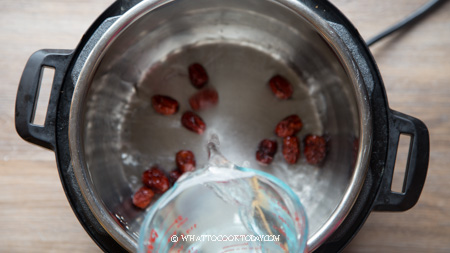 6. Close the lid and turn the valve to “sealing” 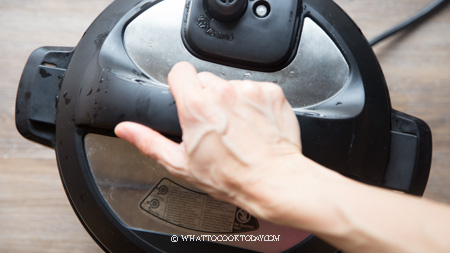 7. Cook on high pressure for 10 minutes. Wait for 5 minutes and then release pressure 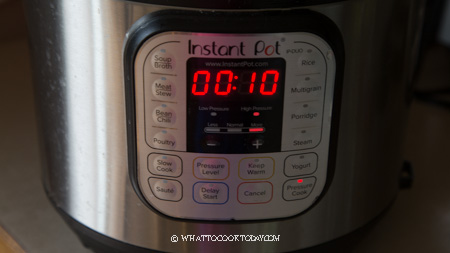 8. Strain the tea into tea pot or glass container 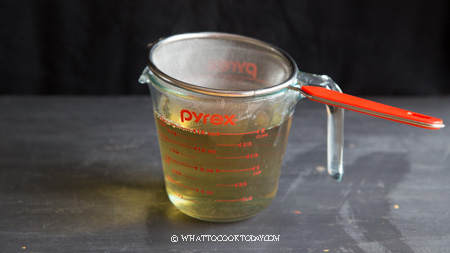 9. Serve warm with or without the cooked dates 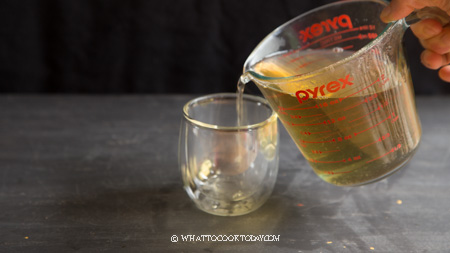 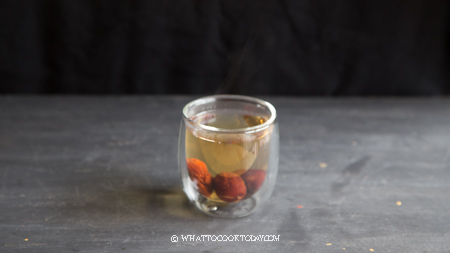 IS THERE ANY TEA LEAVES
This tea doesn’t use any tea leaves so you don’t need to worry about caffeine. It is just called tea because of the color of this beverage
RED DATES NUTRITION FACTS
Dried red dates (jujube) is high in antioxidants such as flavonoids and phenolics. They are also packed with vitamins, especially the B and C vitamins and minerals such as calcium and iron.
WHERE TO BUY DRIED RED DATES
They are usually available at some Chinese grocery stores, Chinese medicine halls, and also at Amazon
CHOOSING DRIED RED DATES
Choose the one that still looks plump (even though they are dried) and has a decent size. You may see some of the red dates have “whitish” coatings on the outside, you can simply rinse them off with clean water before using 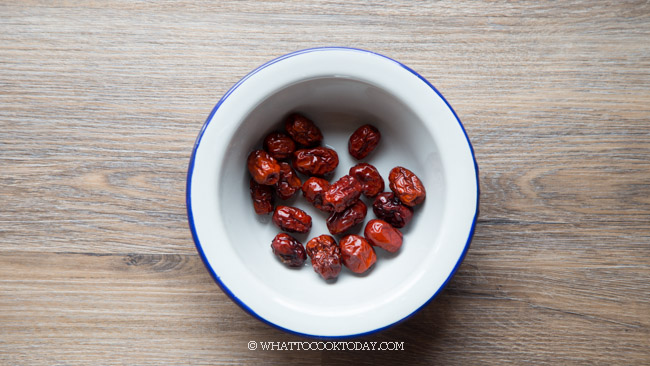 CAN I EAT THE DATES AFTER MAKING THE TEA?
Yes, you may. Most of the nutrients have leached out into the tea, but consuming the cooked red dates are no harm. In fact, I like to do that too
CHINESE RED DATES VS MEDJOOL DATES
Use Chinese red dates for this tea if possible. If you have no access to them, then you can use Medjool dates. Medjool dates are much sweeter though, I suggest half the amount if you decide to use Medjool dates
HOW TO PREPARE AHEAD
You can make red dates tea in a bigger batch for consumption up to one week. They can be kept in the refrigerator. I suggest to reheat them and not drinking it cold especially if you are drinking during pregnancy or confinement.
SIDE EFFECTS
Red dates tea is suitable for daily consumption for anyone in a reasonable amount, such as one to two cups daily (with an exception for confinement when you drink this more often). Like many foods and things in life, too much of anything can’t be good. Know your own health and consult your physician if in doubt. What I wrote here is not to replace your doctor’s advice.
OTHER USE OF DRIED RED DATES
The Chinese commonly use them in cooking savory soup or sweet dessert too 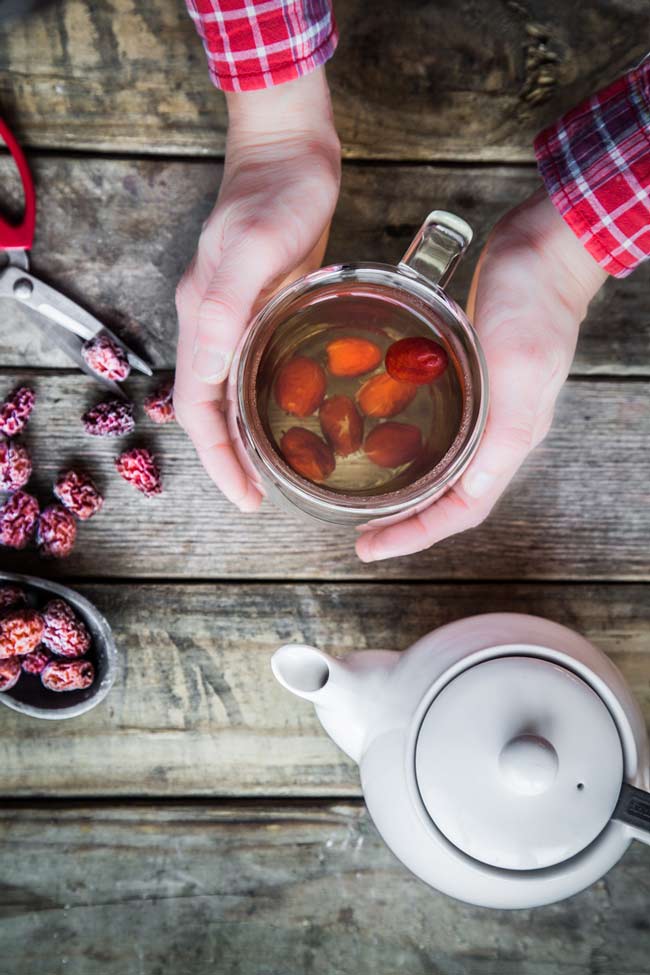 *I was still pregnant with our first child when I first shared this recipe. How time flies! Now 2 kids later and I’ve updated the recipe to an easier approach (less fussy!) and to include a short video too. 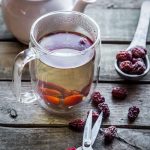 Recommended equipment (use either one of these):

DID YOU MAKE THIS EASY NOURISHING CHINESE RED DATES TEA?

Thanks for sharing this. I love drinking tea and I’m going to try this with the fresh dates I bought from
https://coachellasbestdates.com/.

Made this easy recipe in the instapot. Thank you

It’s so easy having an instant pot 🙂

I don’t have a food scale. Approximately, how many jujubes are needed to make this tea? Thank you!

~24 to a shy quart of water makes a flavorful tea, the color just like Marvellina’s pictures.

Hello Marvellina,
I was just looking up to buy some chinese red dates for 34 weeks pregnant and post pregnancy and I just found that there are several varieties…could you please tell me which variety is best suited for these mentioned.
Thank you Maroula

I know there are different grades for red dates, as for varieties I only know that there are red dates and then the black dates (which are red dates that have been smoked). Definitely look for those that are plump and full and have nice bright maroon color. I’m not sure if this answers your questions.

I hope it helps!!! Get some good quality rest too if you can!