Another way to call this is Spanish Potato Omellete. There’s no flour Tortilla involved in the making. I just learned something new that Tortilla means “little cake” (pardon my ignorance). I made this for breakfast the other day and loved how they turned out. It’s a very hearty and filling dish for breakfast. 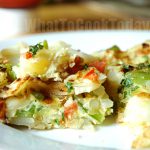 This is a very traditional dish where I’m from, and I’ve only just learned how to make it without using the broiler, ie. flipping it, instead. Not necessary but very satisfying!

I loved this recipe!