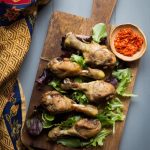 Chicken pieces are cooked in aromatic spices, seasonings, and coconut water and then briefly pan-fried (or air-fried) are popular chicken dish originated in Padang, West Sumatra. Both pressure cooker and stove-top method included. 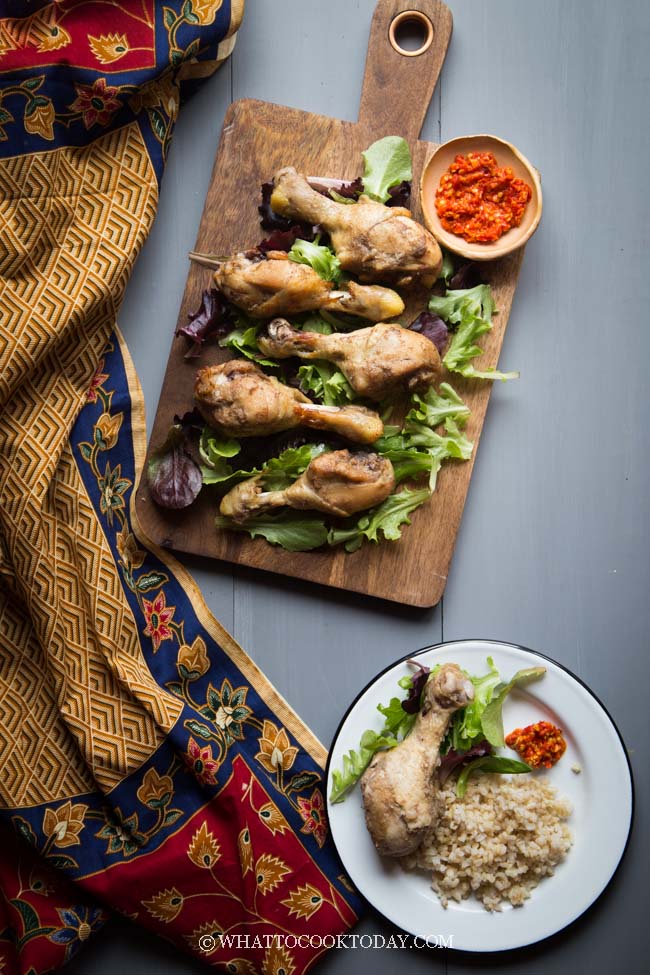 Many of the Indonesian chicken recipes are actually twice-cooked. They are usually either boiled or stewed (or pressure cooked in my case) and then fried. The first cooking is usually to infuse the aroma of spices and seasonings and the frying part, well, just so that they taste even better 😉

HOW AYAM POP PADANG IS MADE

Traditionally, whole chicken is used. The whole chicken is then cut into pieces and then boiled in spices, seasonings, and coconut water (NOT coconut milk). Coconut water is used a lot in Indonesian cooking too. Pretty much every part of coconut is being utilized to its max. For simplicity and convenience, I prefer to use chicken pieces like all drumsticks, or all chicken thighs, or all chicken wings. Not everyone wants to deal with a whole chicken.
After the chicken is cooked, the next step is to briefly fry the chicken.
Ayam pop usually has this white pale appearance, some calls it ayam (chicken) putih (white). After a brief pan frying, the chicken pieces pick up some light golden brown color. So, ayam pop is not meant to be fried until crispy golden brown. The frying part is just to lightly color the chicken and to enhance the taste. 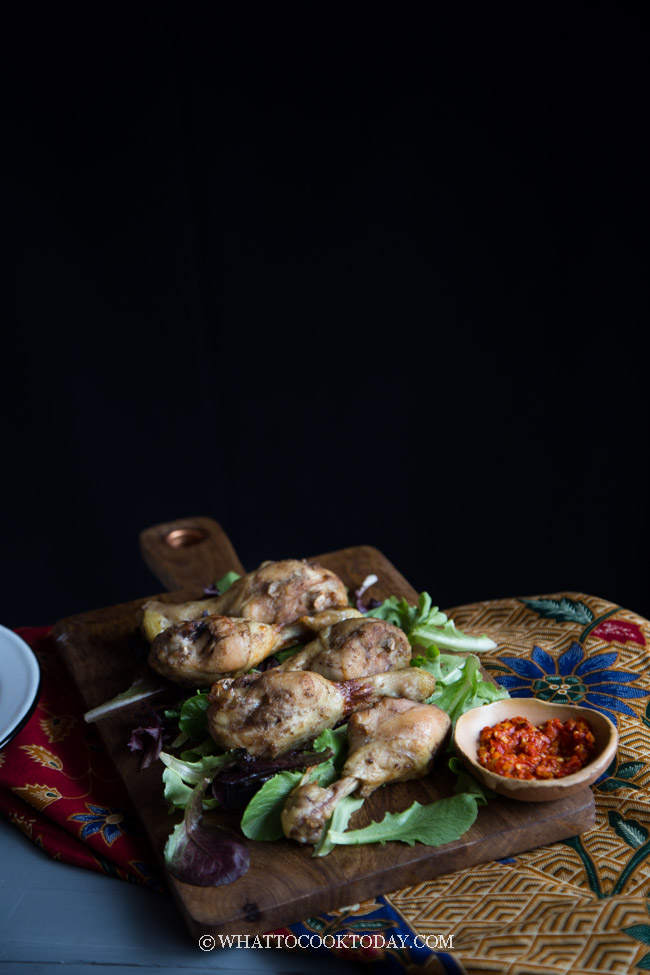 WHAT’S WITH THE NAME “POP”

Ayam pop is originated in Padang, West Sumatra, and named as such because of the “pop..pop..pop” sounds it makes when you fried the chicken, you know….when liquid and oil comes into contact! Yup, that’s how it was named 🙂 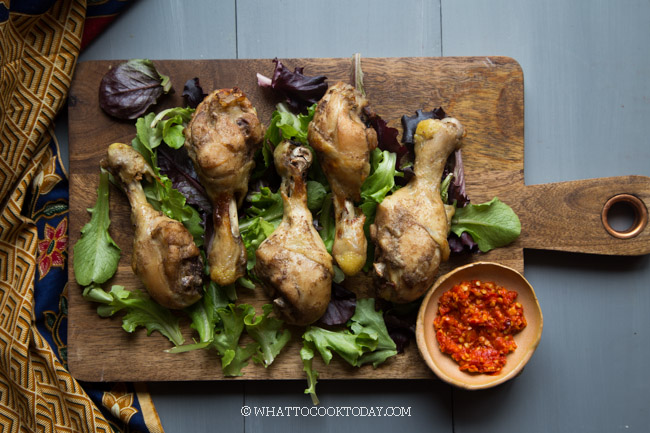 MY VERSION OF AYAM POP: PRESSURE COOKED AND AIR FRIED

I like authentic and traditional Indonesian recipes, but in this modern day, I feel like it’s nice to simplify the process whenever possible without losing the original taste. I love using Instant Pot pressure cooker any chance I have too. Pressure cooking the chicken also saves times and more flavor than just boiling the chicken. The chicken pieces are perfectly tender without being overcooked. I like to use an air fryer to lightly brown the chicken pieces too. It’s so much more convenient and yes, while you may argue that I won’t have the “pop” sounds, but all that matter is the end result right? 😉 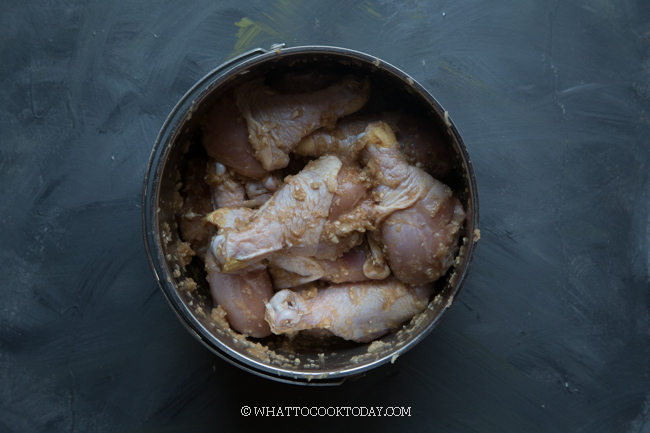 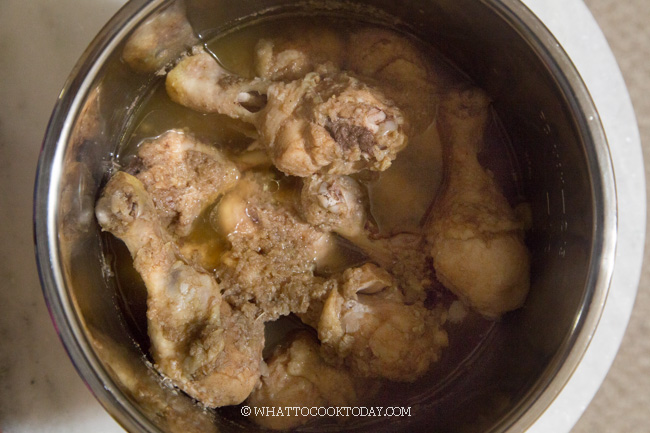 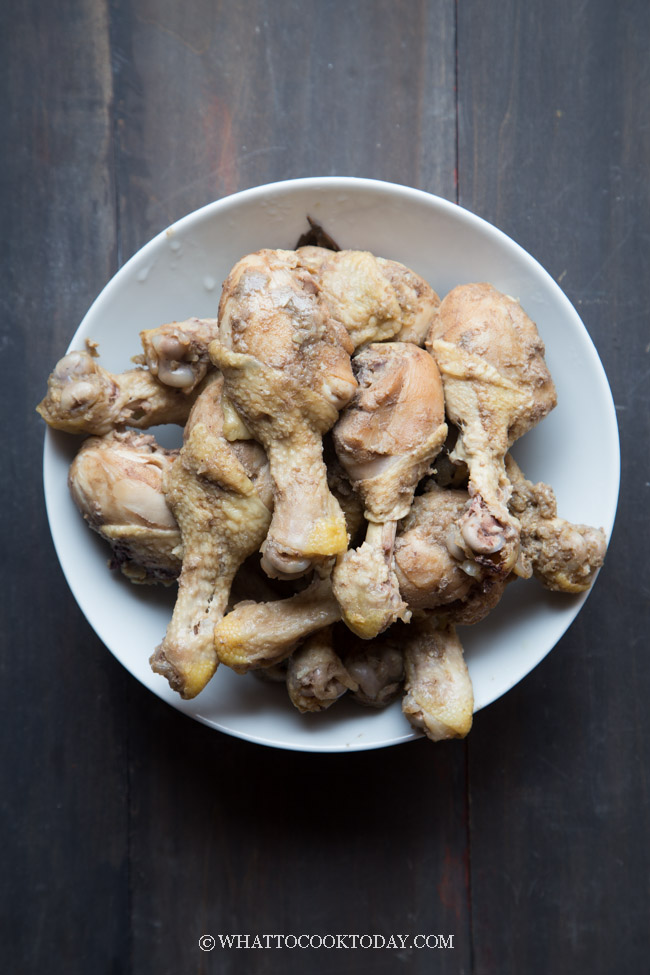 Ayam Pop before pan frying (or air frying in my case)

DON’T LET ITS APPEARANCE FOOLS YOU

Ayam pop Padang may not be the most attractive looking chicken dish I must admit. Pale in color and immediately people will probably think lack of flavors, but the opposite is true. Indonesian cooking can be a bit intimidating at first when you look at all the spices, herbs, and seasonings. But it is because of all these spices, herbs, and seasonings that make a pale-looking chicken like ayam pop shines through 😉
Thankfully these days, more and more Asian ingredients are more widely available, not only in Asian stores, but I see more of what used to be exotic ingredients, are available at places at mainstream Western grocery stores. 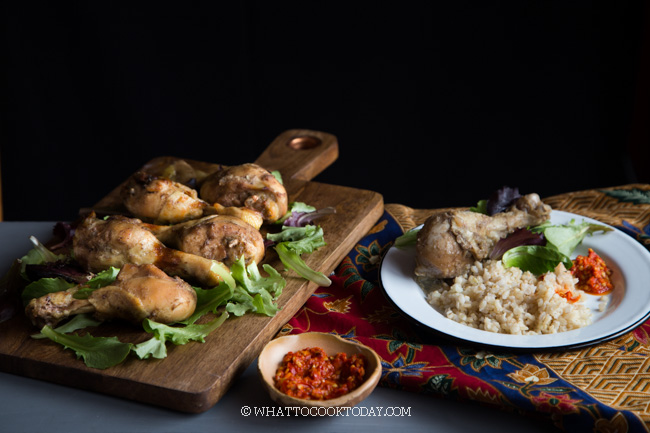 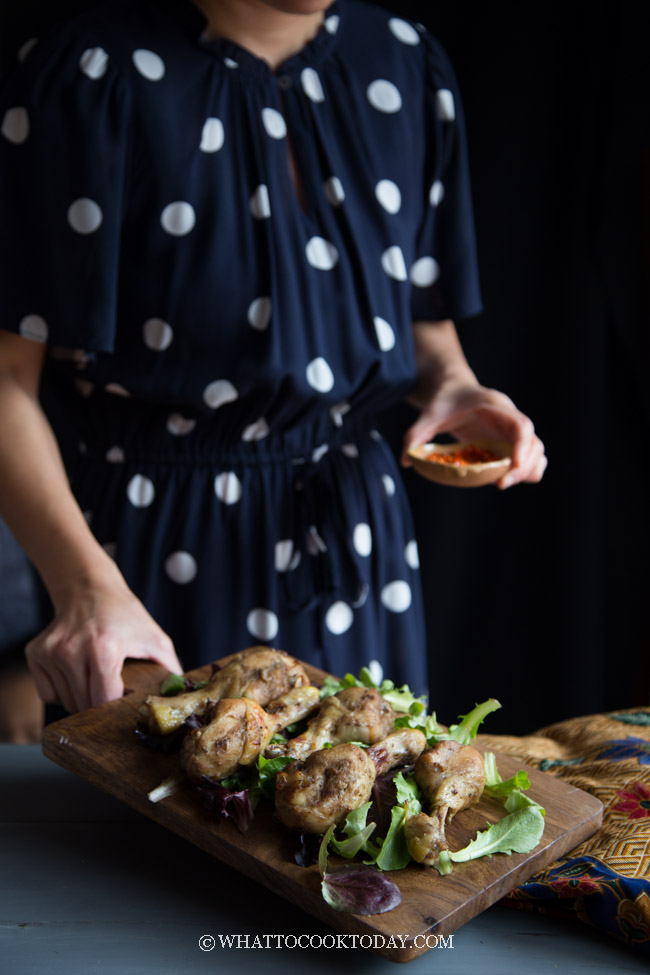 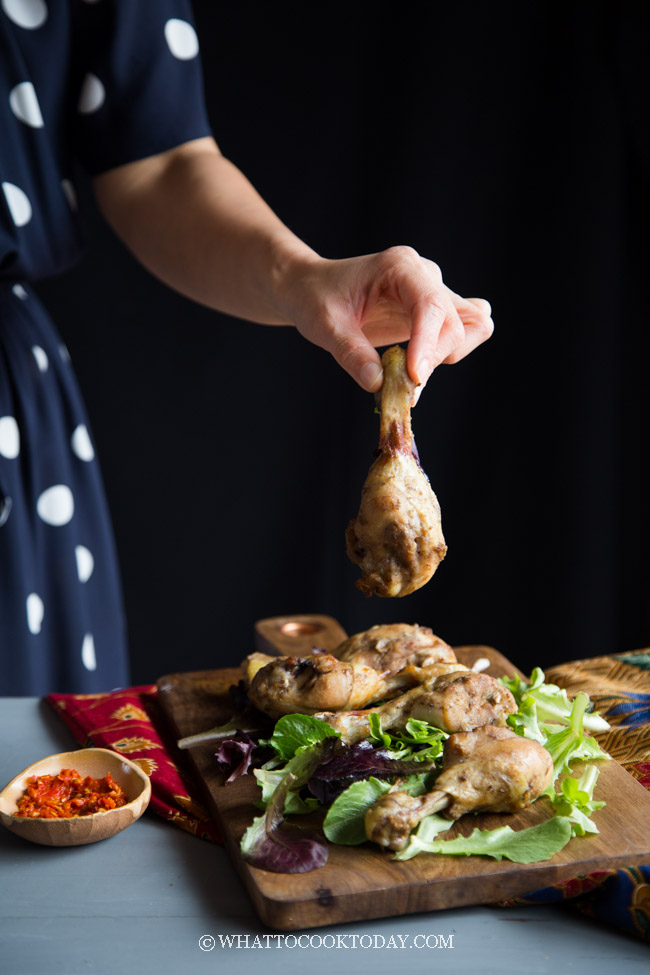 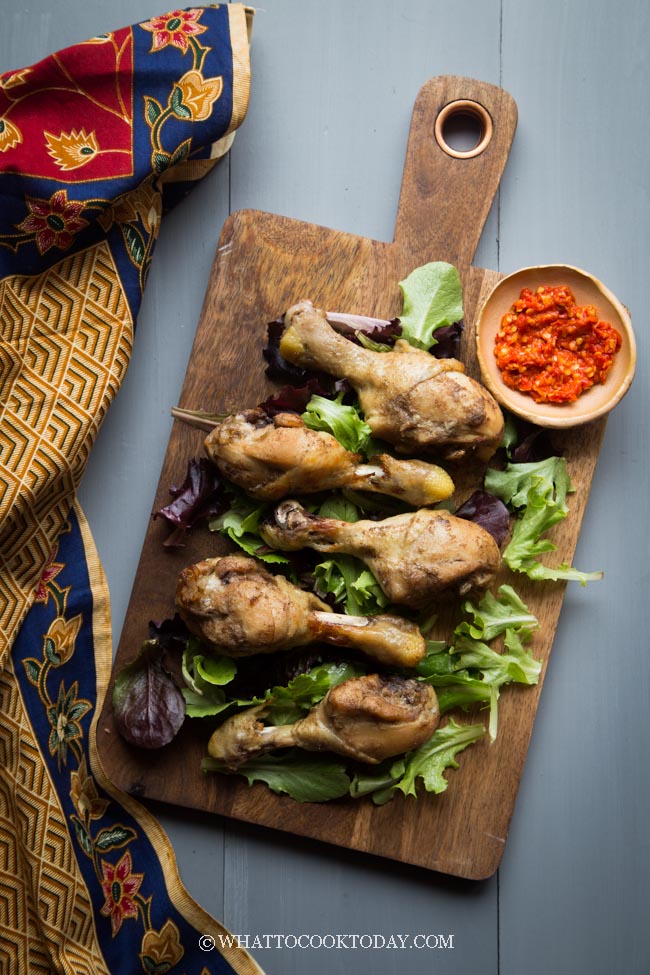 And of course, you can’t eat ayam pop Padang without the sambal! I know I looked a bit barbaric by using my hands to eat rice, but this is a pretty common scene in Indonesia, not when you eat Indonesian Chinese food, but more often than not with the native Indonesians. 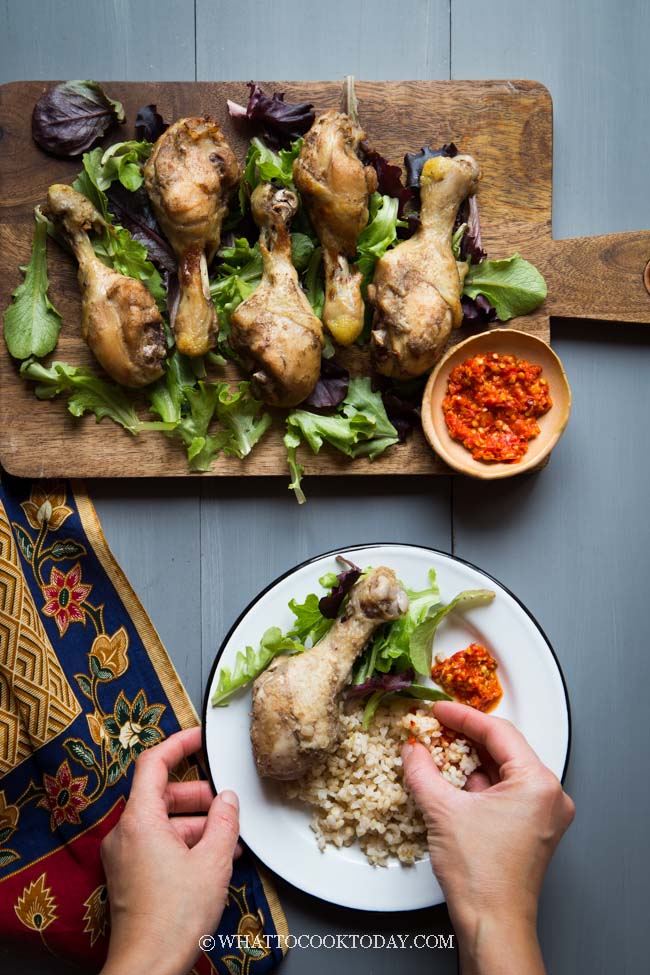 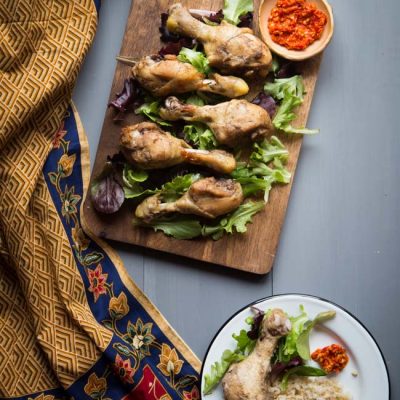 I highly encourage to weigh ingredients with a digital kitchen scale instead of using measuring cups as they are not very accurate especially when it comes to recipe that requires precision.

Prepare the chili sauce (can be prepared the day before):

Cooking the chicken on the stove:

Air frying the chicken pieces: (if you choose not to pan fry)

I made this tonight. My wife, who grew up in Medan, (Polonia area), asked me to tell you she says “sedap kali” and that it is just like one from “warong Pedang”. I used the air fryer and substituted 10 spoonfuls of “Sambal Olek”, for the chillies because it is harder to find Cayenne or Birds Eye chilli around here, but the sambal still came out good. I didn’t add sugar or salt since I figured the Sambal Olek already had that. Next time, I’ll let the chicken marinate longer.

Hi Scott,
I’m happy to hear that another Medanese enjoy this ayam pop Padang 🙂 I grew up in Medan too 🙂 Nice call to use sambal oelek as substitute, I do that pretty often too because yes, it’s harder to find cayenne peppers here too. Thank you (Terima Kasih) for letting me know 🙂 Cheers!!

I thought I made 2 night’s worth of dinner with these, but my family ate almost all of them in one night. Next time, more drumsticks!. I took the recommendation on using the leftover broth in the instant pot and it made spectacular, rich soup with some noodles and veggies added. And my wife and I were putting the chili sambal on everything.

What a great recipe – it’s a bit of work, but you end up with a lot of different bits of food.

I’m so happy to hear that your family loves the recipe. And yes…that broth..my kids love it when I just simply whip up a noodle soup with it. Thank you so much for letting me know. I just love it when others are able to recreate my recipe at home 🙂