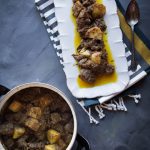 Learn how to make the real deal Indonesian beef rendang Padang from scratch. All the tips you need to replicate this on the stove or with a pressure cooker. 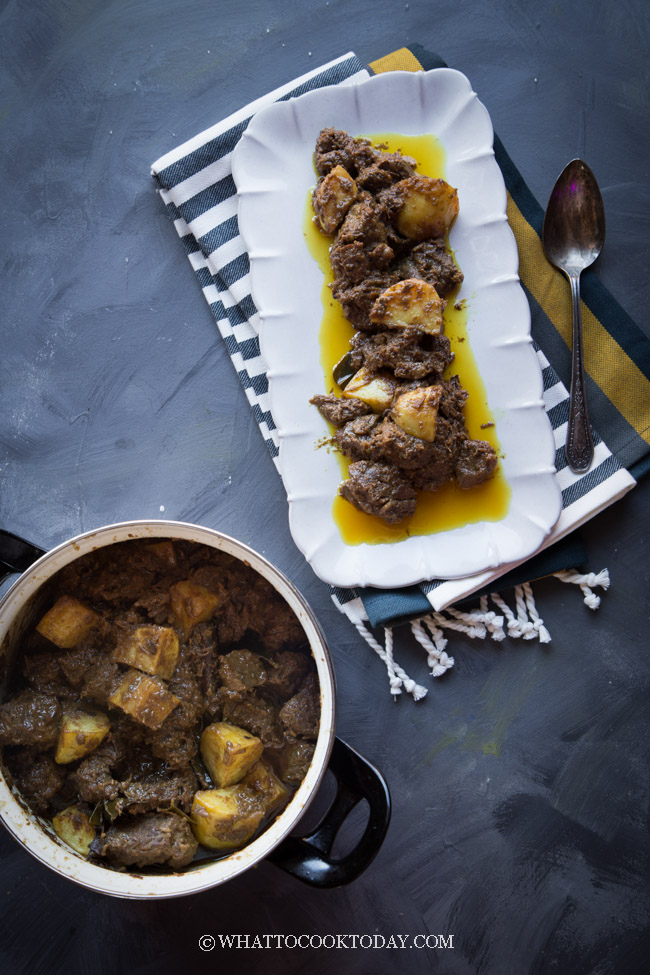 You don’t know delicious until you taste authentic rendang Padang. I’m not even kidding! Rendang is one of my most favorite Indonesian dishes. It is one of Indonesia’s National Dishes. I remember eating rendang Padang with sweat streaming down my face but yet I couldn’t stop because it’s so addicting. The rendang sauce with the rice is so freaking good!

THE ORIGIN OF RENDANG

Rendang is originated from the Minangkabau ethnic group in the city of Padang in West Sumatra, Indonesia. It is sometimes known as Randang in Minang dialect. Padang food is known to be one of the most popular in Indonesia, known for its rich taste and incredible flavor. Rendang Padang is one of the super popular ones across Indonesia or even in Southeast Asia or worldwide these days.

Just scroll down and take a look at the list of the spices, herbs, and other ingredients and you will understand why it tastes so damn good! The coconut cream is also what makes rendang Padang tasted incredible. It is such a complex flavor that it’s hard to describe. It’s a loongggg list of ingredients, but I can assure you, it’s worth it!!

HOW TRADITIONAL BEEF RENDANG PADANG IS MADE

Traditional beef rendang is also known as the dry rendang. Back in the old days before refrigerator is common, the method of cooking rendang calls “merendang” (slow cooking) is actually to preserve the meat longer. Rendang is cooked in lots of spices, herbs, and coconut cream. As the beef is slowly cooked until tender, it will ooze out the liquid, this liquid is continuously cooked until it evaporates and the oil from the coconut cream separates. The oil will then gently fry the meat. No more liquid in the dish means it can last longer without spoiling and the oil that separates will help to preserve the meat longer too. 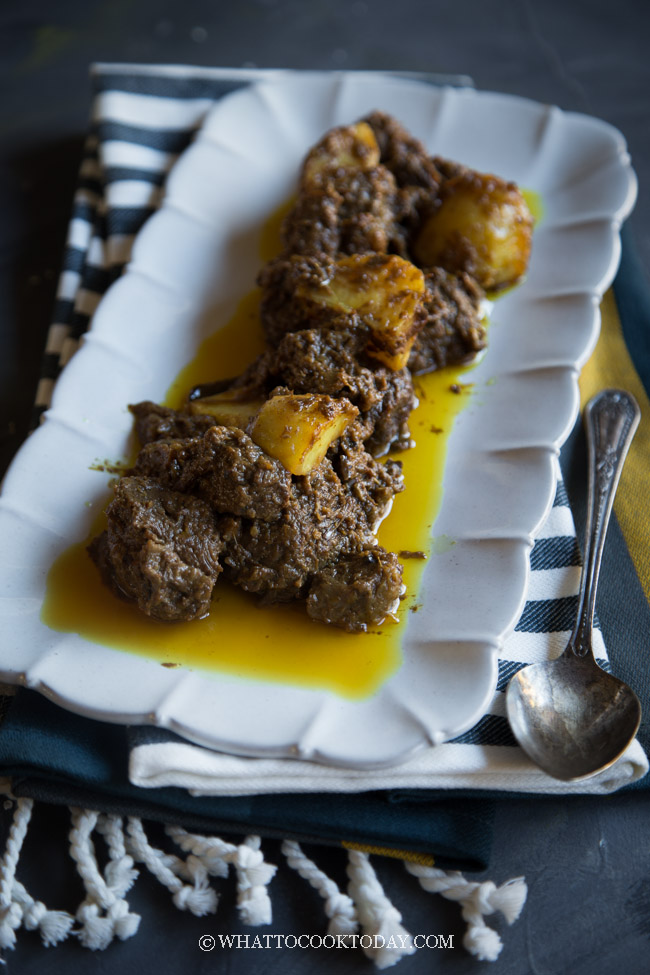 1. The color
Traditional rendang Padang is dark in color. The spices, the coconut cream and everything else in there will gradually change color as you cook the rendang.
2. The oil separation
Yes, that’s one of the key signatures of rendang. The oil that separates from the coconut cream helps to preserve rendang and also adds an incredible flavor to the dish. 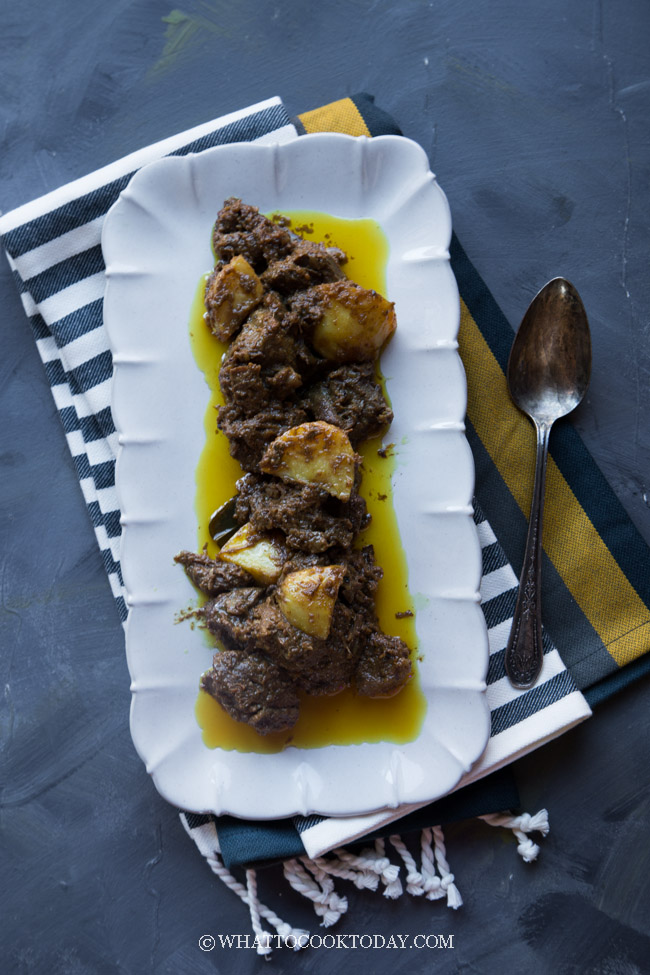 1. TASTE AUTHENTIC
It tastes as good as I can remember it when I had it as a kid.
2. SIMPLIFIED WITHOUT COMPROMISING TASTE
I simplify the recipe by using some ground spices, which are widely available these days, but I can assure you that the end result still tastes amazing.
3. THE BEEF IS PRESSURE COOKED
Traditionally the beef is boiled for hours until tender. I only need 30 minutes to pressure cook the beef until it’s tender. I love pressured cooked meat because it’s tender in less amount of time.

Why in the world do I want to do that you would ask! Wouldn’t it be more convenient to reduce the sauce right there in the Instant Pot. I tried! While it’s possible to do this, it really creates a mess. I can’t control the level of heat on the saute mode in Instant pot, which means, the rendang is continuously boiling at possibly high heat and the sauce keep splattering all over. I finally decided to transfer the rendang to a regular pot and reduce it over low to medium heat. It works great! Beef is tender in half the time and less mess. 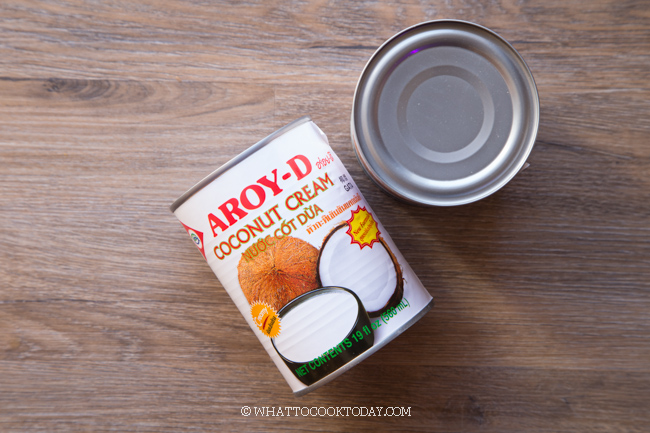 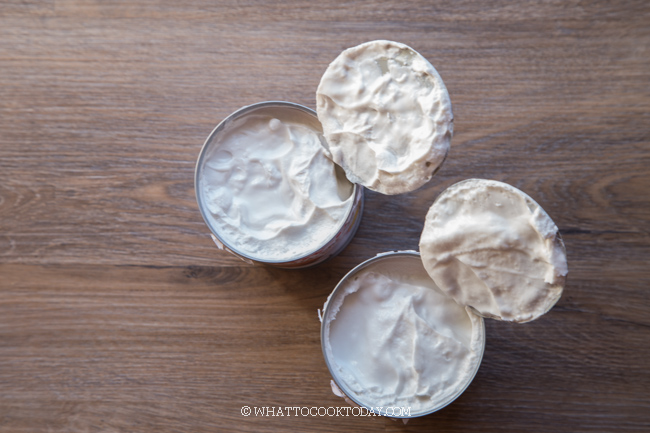 Look how thick the coconut cream is. The bottom part is more watery. I usually use a spoon to carefully spoon the cream out and leave the watery part for other use. The more concentrated the coconut cream, the better because you won’t have as much liquid to boil off later while reducing the rendang.

2. CUT OF BEEF TO USE IN RENDANG PADANG
My favorite is with the combination of chuck and shank. Traditionally the rendang Padang doesn’t usually include shank. But the shank is so good after it is pressure cooked to tender. You can also make it with just chuck. Chuck is perfect for long cooking. It’s a personal preference, but I don’t like rendang made with sirloin, but that’s just me.
3. SIZE OF THE BEEF
You definitely don’t want to cut the beef too small or too large. Try to cut into equal size as much as possible. Cut into about 1 inch (2.5 cm) pieces
4. TOASTED UNSWEETENED GRATED COCONUT
The toasted unsweetened grated coconut adds another layer of flavor to the rendang Padang. You might think this rendang Padang might end up tasting like a bit pot of coconut, but let me tell you it’s not. Everything used in to make the rendang just comes together beautifully to give you such a complex rich flavor and taste.
5. SAUTE THE GROUND SPICES FIRST
This is important in most Indonesian cooking. Most ground spices and herbs are usually sauteed until really fragrant and darken in color. This step will amplify the flavor of the dish.

1. Grind the spices into coarse paste 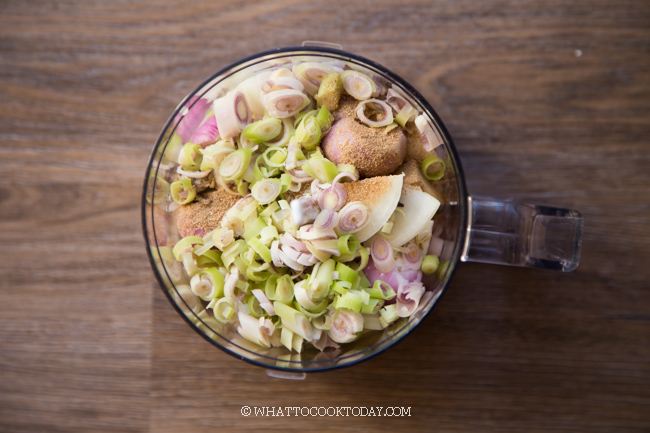 2. Saute the paste until really fragrant 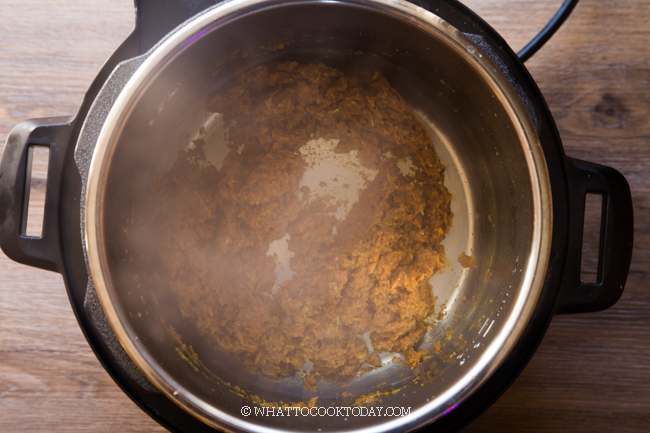 3. Pour the coconut cream in and then add beef 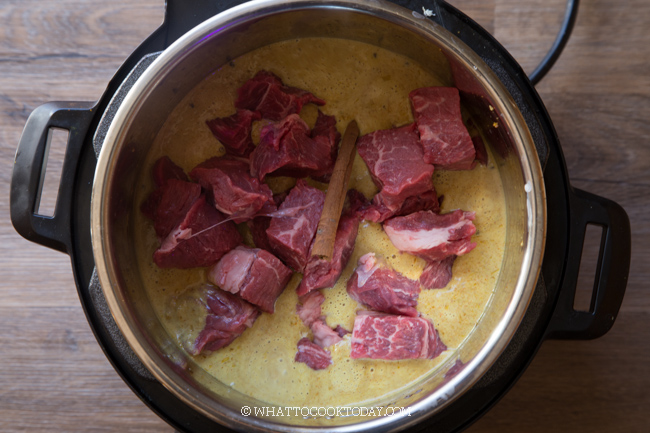 4. Pressure cook the beef for 30 minutes
This, of course, isn’t a traditional method, BUT, it saves more time and gives you tender beef without compromising the end result. This was how it looked like after pressure cooking. The coconut cream has actually separate and of course, we have some liquid oozing out from the beef that we need to slowly cook until evaporates 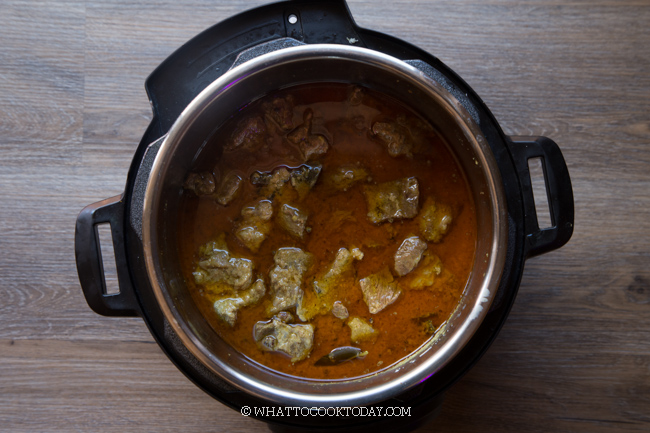 7. Reduce the rendang on stove top
I remove the beef after pressure cooking and transfer the rest to a pot and let it slowly simmer until all liquid evaporates and the oil separates. How dry you want it to be is really up to you. Authentic rendang Padang is really dry, but if you like it more moist with a bit more sauce, you don’t have to reduce as long. 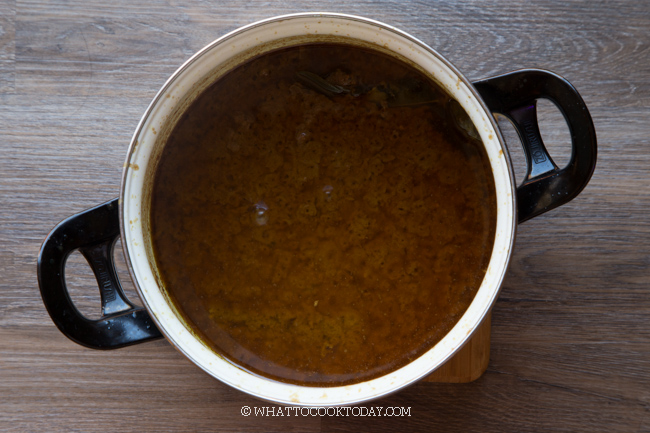 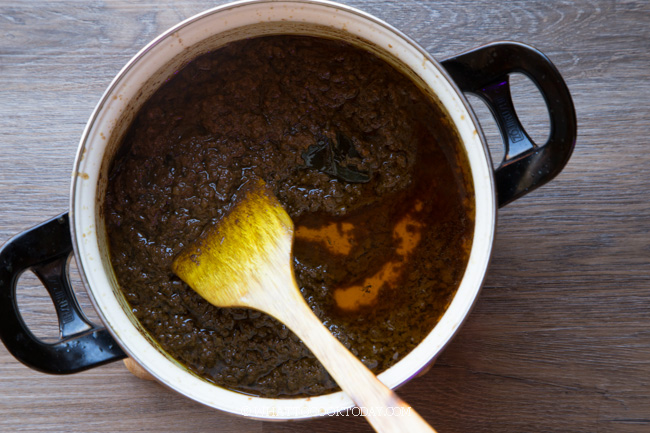 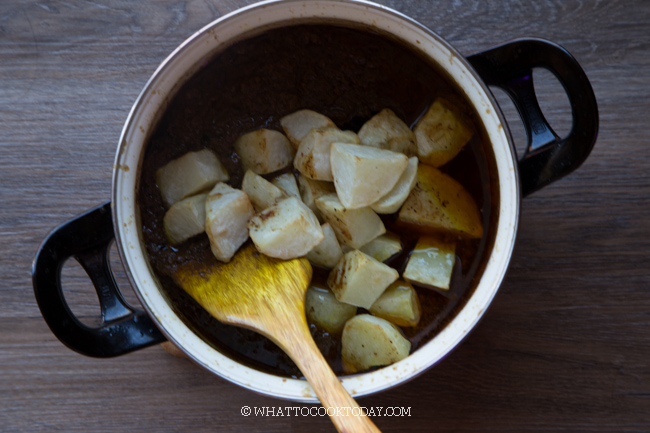 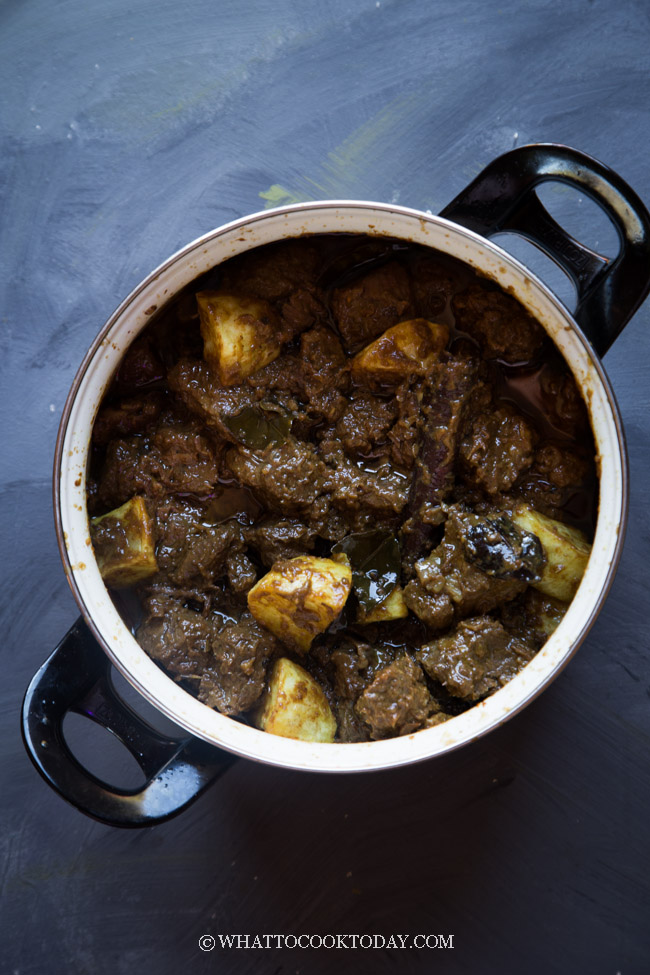 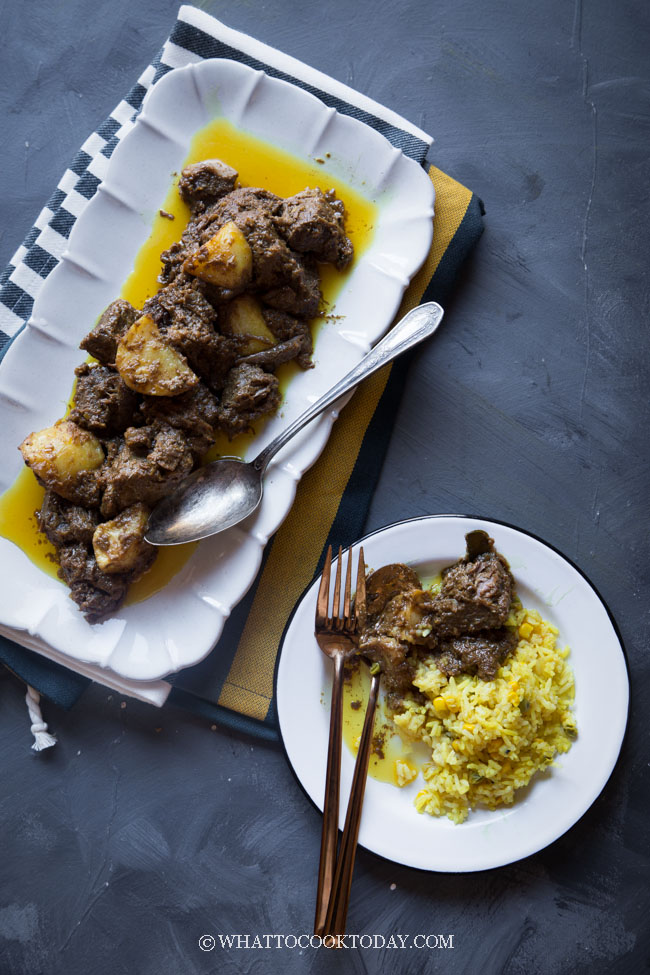 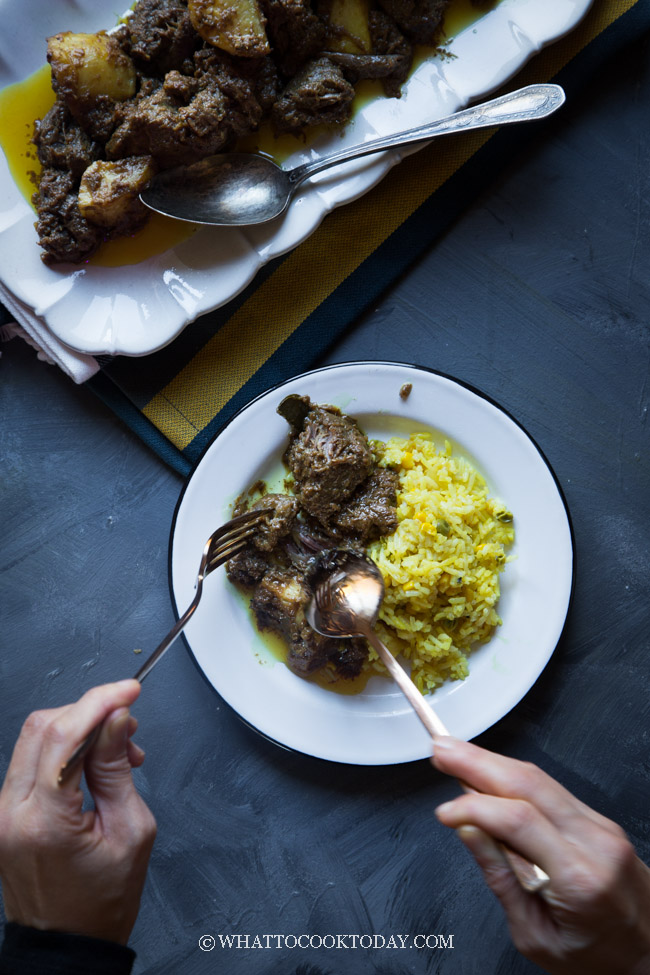 *Recipe is written for 6-quart Instant Pot. Cooking time should remain the same for 8-quart size but will take longer to pressurize. For mini duo (3-quart), I recommend to half the recipe and use the same amount of time to cook* 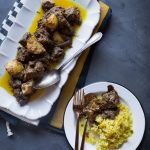 Ingredients to grind into paste:

Other herbs and spices:

Things you can prepare ahead:

Cook the potatoes (if you choose to include potatoes):

Transfer to a large pot:

If you make rendang on stove-top without pressure cooking the beef first:

I personally think the best cut of beef to use for beef rendang is beef shank/beef shin because it has a mixture of tendon and meat and when you cook them long enough (or pressure cooked), it gives you that melt-in-your-mouth texture. But shank is not always available and that's when I use chuck, which works really well too.
Tried this recipe?Mention @whattocooktoday or tag #WhatToCookToday

Hi, in your recipe you say use the “fat” part of the lemongrass. Does this mean that we do not grind 1 whole stalk of lemongrass but only around 1/2? Am confused since under “ingredients to grind” it states 1 stalk

Hello, sorry for the confusion. I should have written it like this “Use the “fat” part of the lemongrass and slice into rings before putting them in the food processor. Discard the skinny woody part of the lemongrass. Place the rest of the ingredients to grind in a food processor and ground into a coarse paste”. So you still need one stalk lemongrass, but you won’t use the top part that usually kinda dry and woody if that’s making any sense.

Thanks so much for your prompt and helpful reply. I’ve been in the UK for years now (not gone home to Singapore because of the pandemic) and so miss the dish. As you probably know, versions of rendang are common in both Malaysia and Singapore. I’ve got to the point where the craving is pretty bad, so I’m intending to make this myself some time in the next few weekends as a treat!

Hi Lorraine, I hope this perhaps can help to “tame” that craving somehow 🙂 Let me know how it turns out if you have a chance to give it a try 🙂

thanks! By the way, may I ask if this dish gets better when you leave it to stand overnight in the fridge, like kari ayam (I tried your recipe and it was awesome!)?

oh definitely! It tastes even better the next day onwards 🙂

Hi Marvellina, I just made this over the weekend! One of the best renditions of the dish yet <3 I did miscalculate and dump in a fair bit more coconut cream than specified, but it still turned out great. Partner says it's by far hands down the best curry he's ever eaten

Hi Lorraine, so glad you guys enjoyed it 🙂