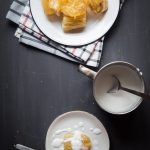 Singkong Thailand / Candied Cassava (Montad Chuame)-Cassava/Tapioca/Yucca root is slowly cooked in syrup and served with slightly salty coconut sauce. Montad chuame is out of this world! 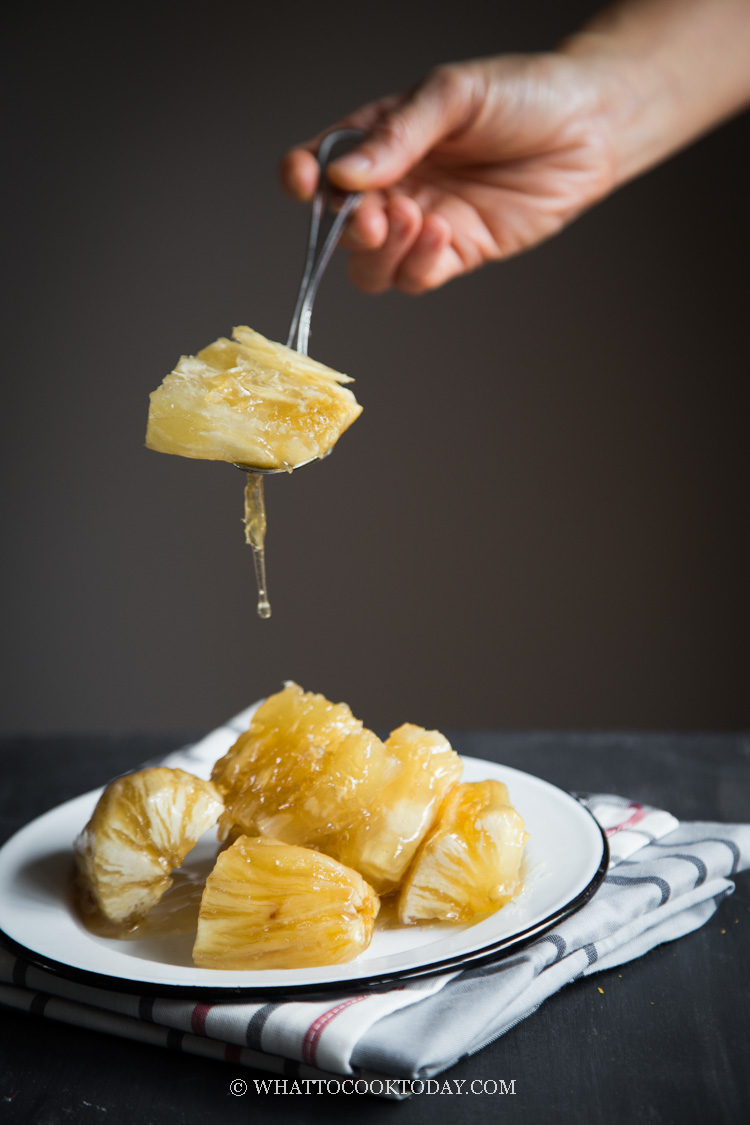 MONTAD CHUAME (SINGKONG THAILAND)
My Thai friends introduced me to this montad chuame when I was in college. Pieces of cassava are simmered in sugar and water that slowly reduced to a sticky syrup and sweeten the cassava. Coconut sauce is poured on top just before serving! It was a pure bliss inside the mouth! If you have followed quite a bit of Southeast Asian food, you will immediately see that coconut milk is one of the ingredients we can’t live without! Savory or sweet dishes!

Cassava is utilized a lot across Southeast Asia and I believe in Africa and other parts of the world. It’s a cheap source of carbohydrate. In Indonesia, it is often categorized as “poor” people food. It’s very economical compared to rice. Buying cassava here in the U.S. is not as cheap though 🙂 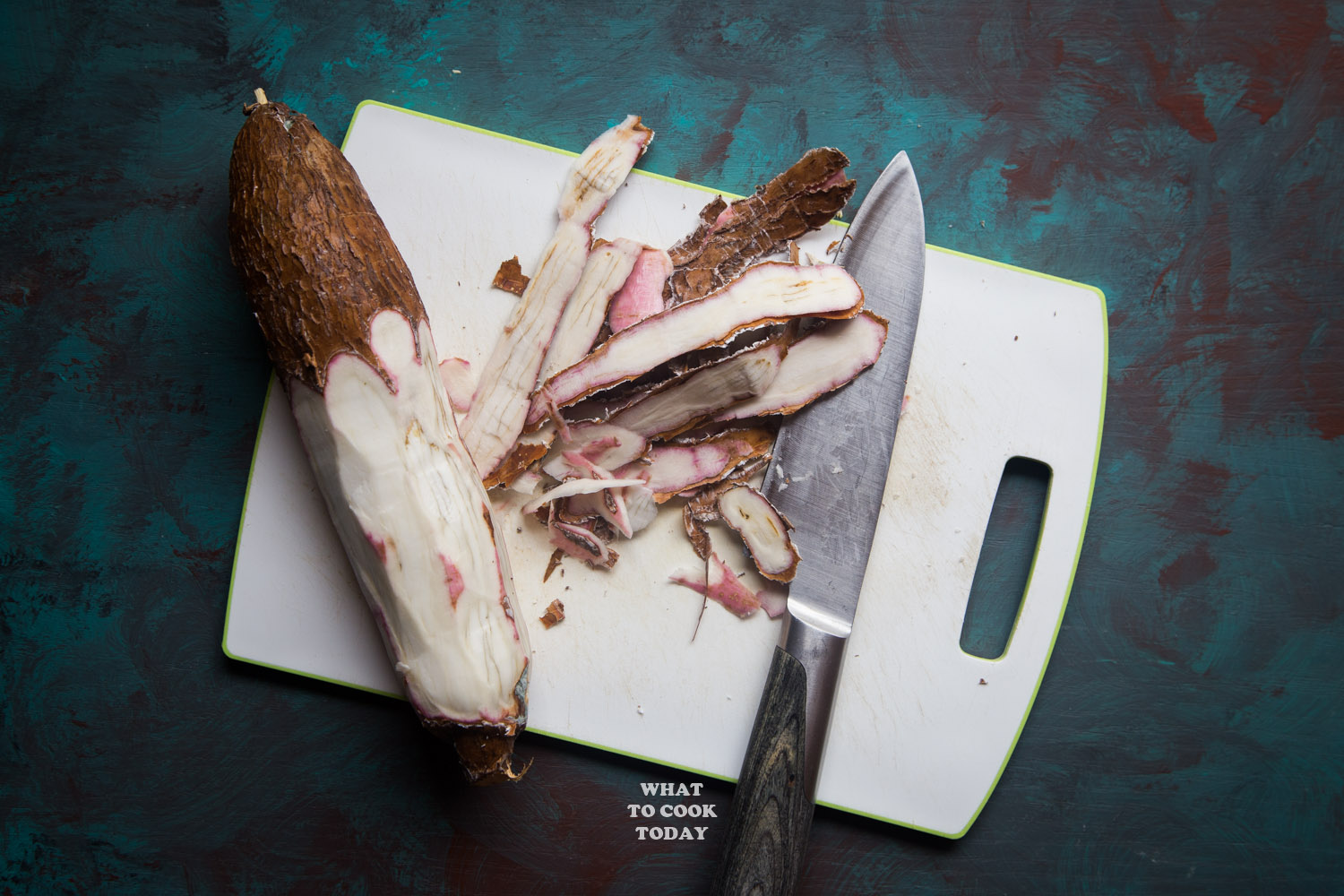 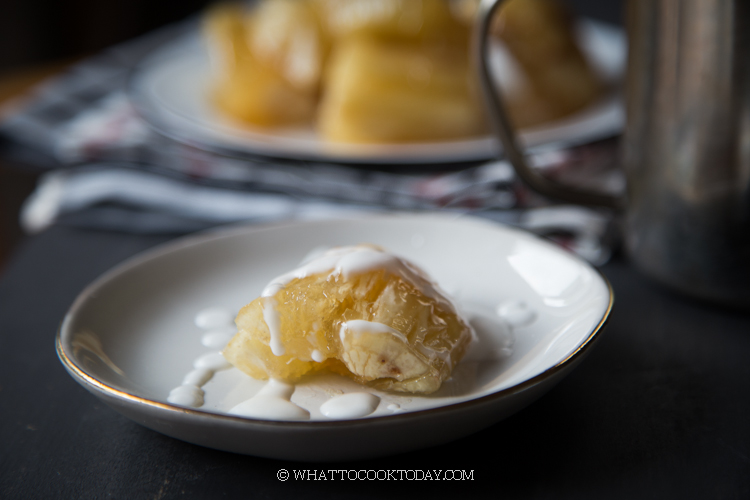 HOW TO MAKE MONTAD CHUAME SUCESSFULLY
Making montad chuame is a no-brainer and knowing a few tips will ensure you get a good result.
1. The size of the cut
I prefer not to cut the cassava into small pieces because they will turn into mush when you cook them. I cut them into about 4-inch log and then halve them. It is also important to try to cut into an equal size so they cook evenly. Remove any visible tough core in the middle. This will give you a good size and better presentation of the end product later
2. Control the heat
The cassava will be slowly cooked until the sugar reduced into thick syrup consistency and the cassava itself turns translucent and soft. So it is important to cook it under low heat to prevent the sugar from burning or reduce too quickly before the cassava turns translucent.
3. Not all pieces are equal
Some cassava may turn translucent faster than the other. If the syrup has thickened and some of the cassava have turned translucent and soft but the others have not, carefully remove the ones that have to a plate and add a bit of water and continue to cook the rest to let them turn translucent. 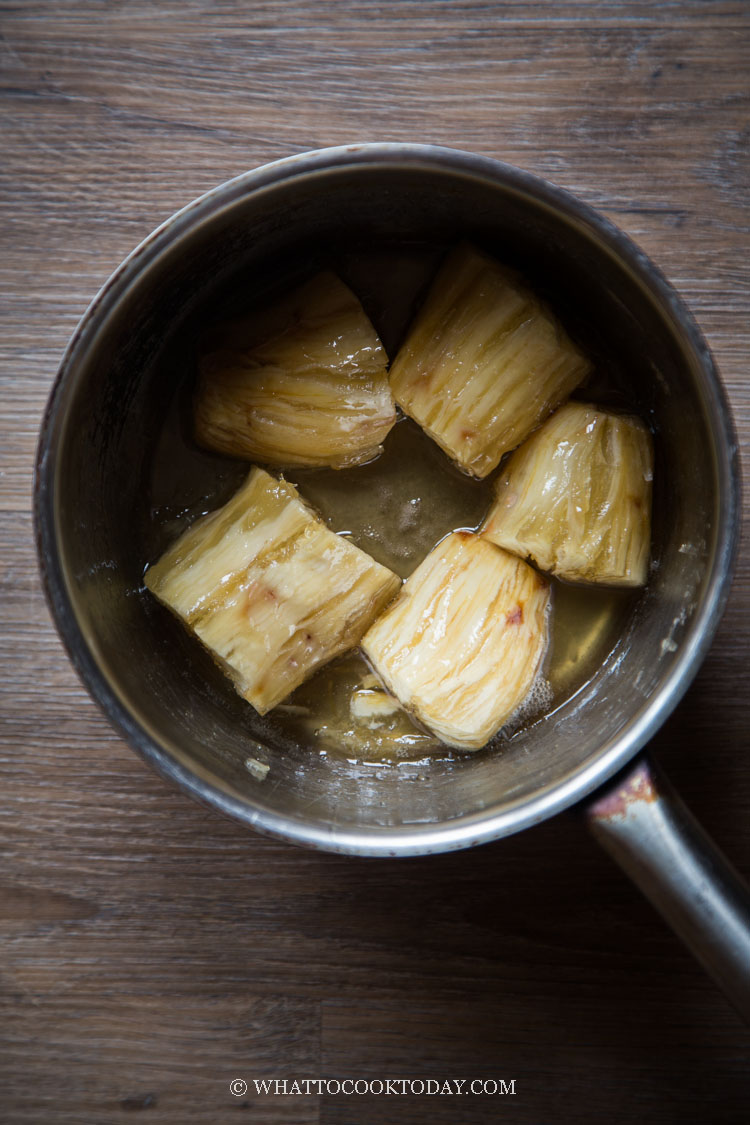 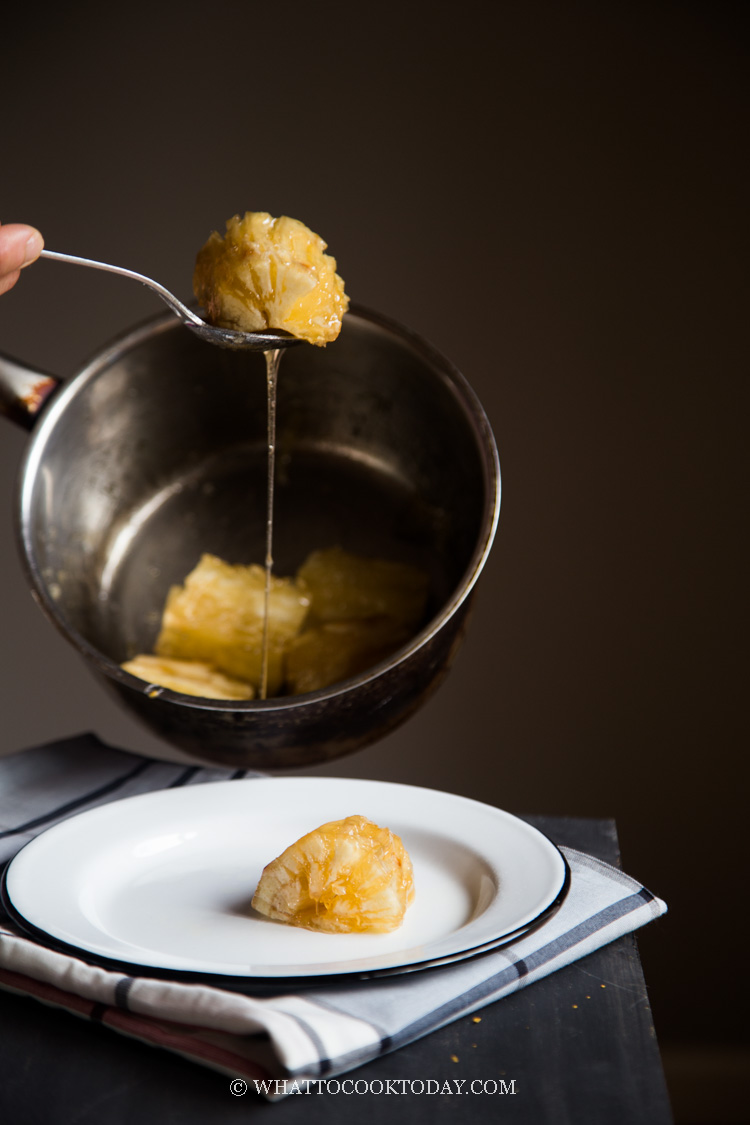 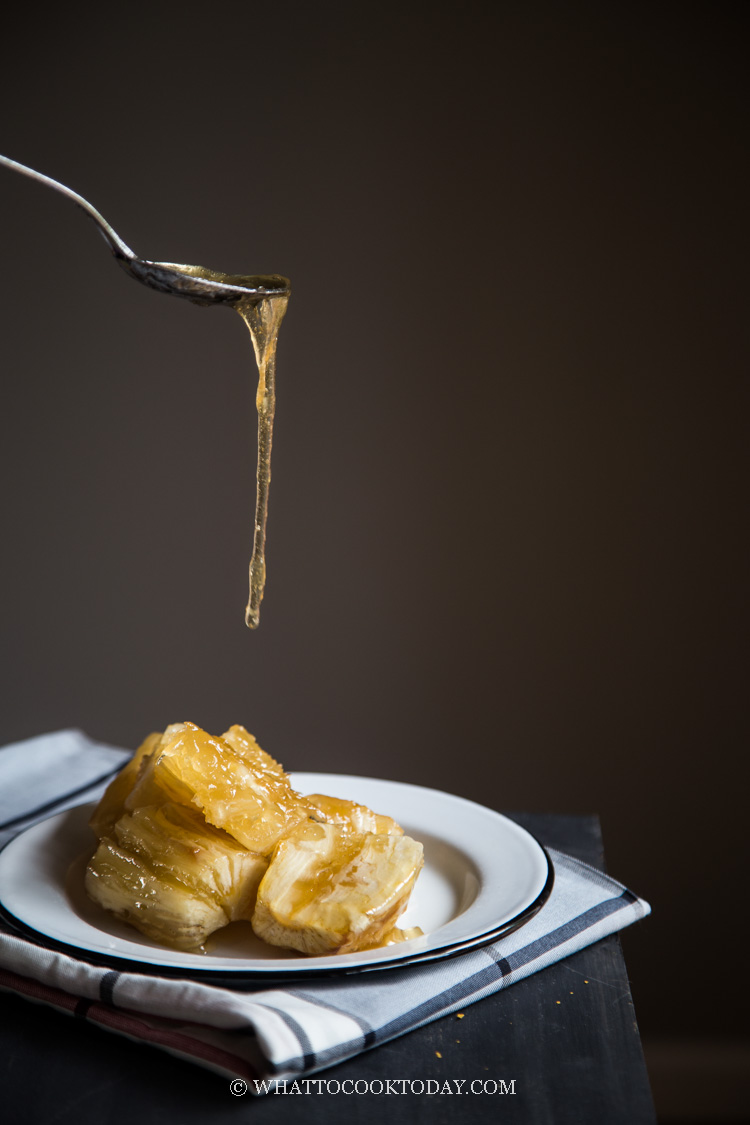 WHY MONTAD CHUAME CAN BE ADDICTING
If you don’t like cassava/tapioca, then you won’t be reading this post. I found montad chuame highly addicting. Something so simple can be so satisfying it’s almost ridiculous! I don’t even like candied sweet potato. I found it extremely too sweet and the texture is too mushy.
Montad chuame is basically cassava boiled in sugary water until the liquid turns into a thick syrup coating the cassava and then served with slightly salty coconut sauce. Now…this is where it gets me….the sweet and salty combination it’s my weak point! It’s addicting because cassava has that soft bouncy texture to it and not mushy (unless you overcook it badly) when it is cooked and it doesn’t taste sweet on its own, so it’s perfect when it is coated in syrup and then balanced by the creamy and slightly salty coconut sauce. 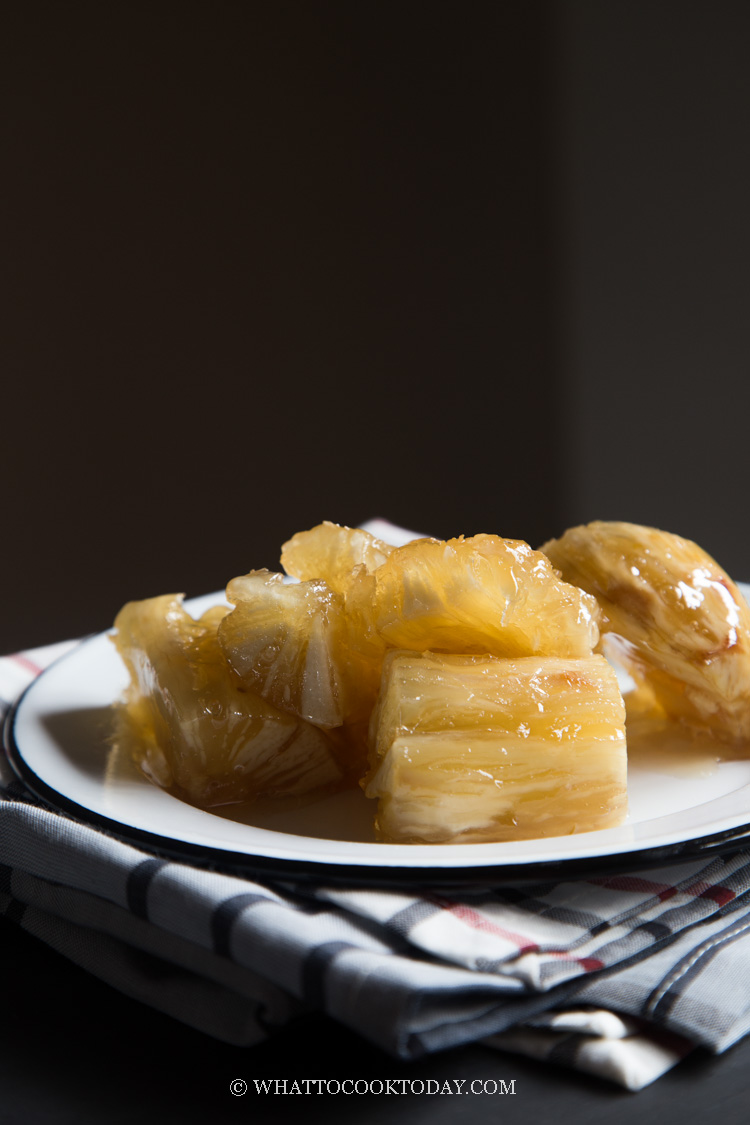 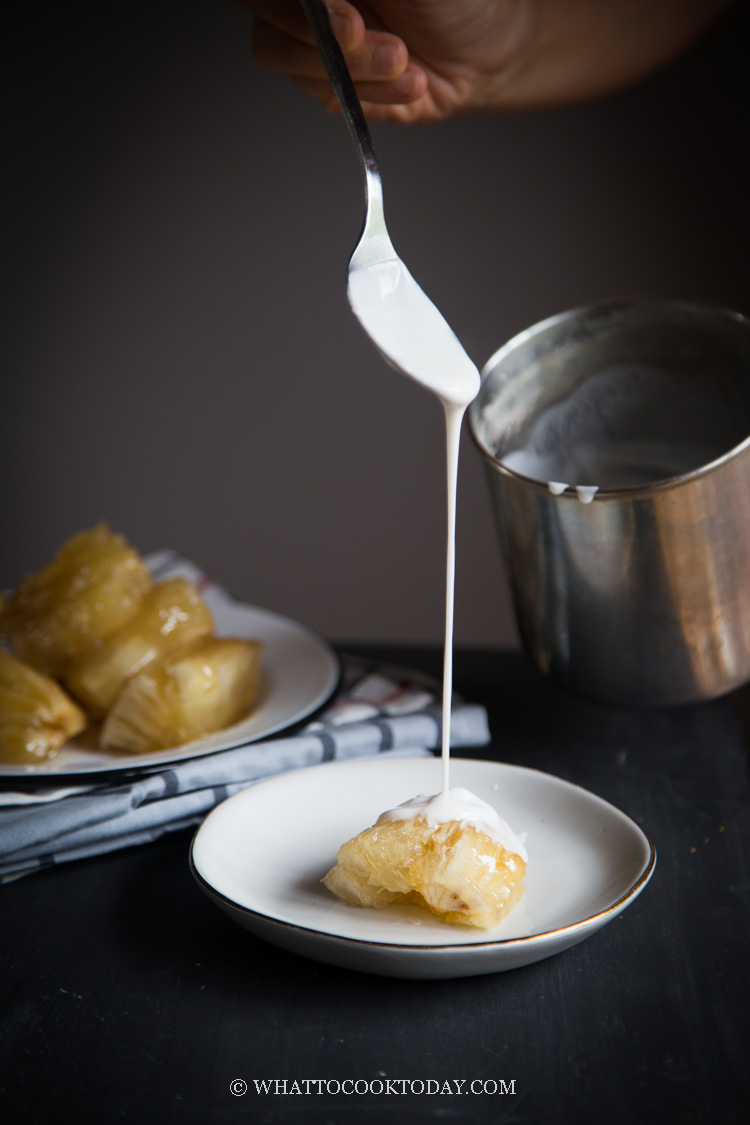 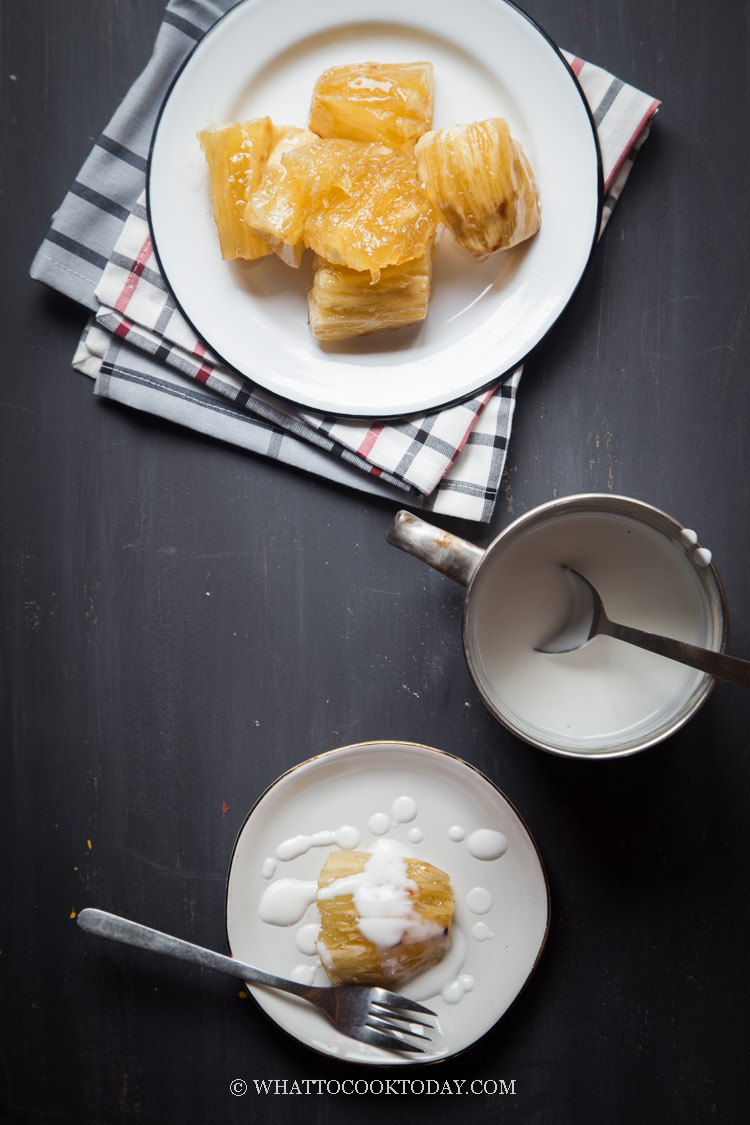 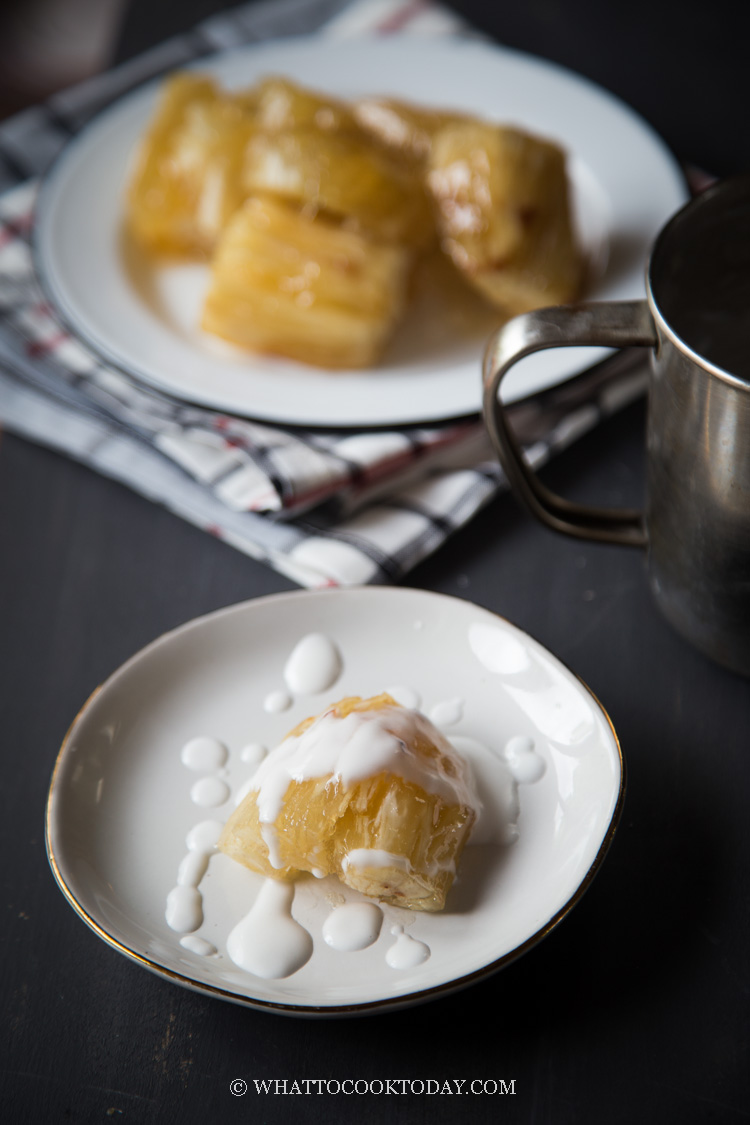 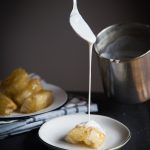 This recipe is really exciting! I first learned about the need to boil the cassava root after peeling it during a Beerology exhibition – the first primitive beers in South America were made from cassava. Never had a dessert like yours before though. The coconut syrup sounds divine, love it.

That is very interesting information. I never knew one can brew beer from cassava, but again what do I know about beer brewing! LOL! If you like cassava, I think this might be up your ally