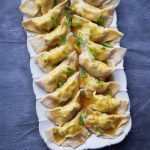 Juicy savory meat filling is wrapped in egg omelet wrappers. They can be served with some gravy or in a hot pot or soup. A Chinese New Year staple. 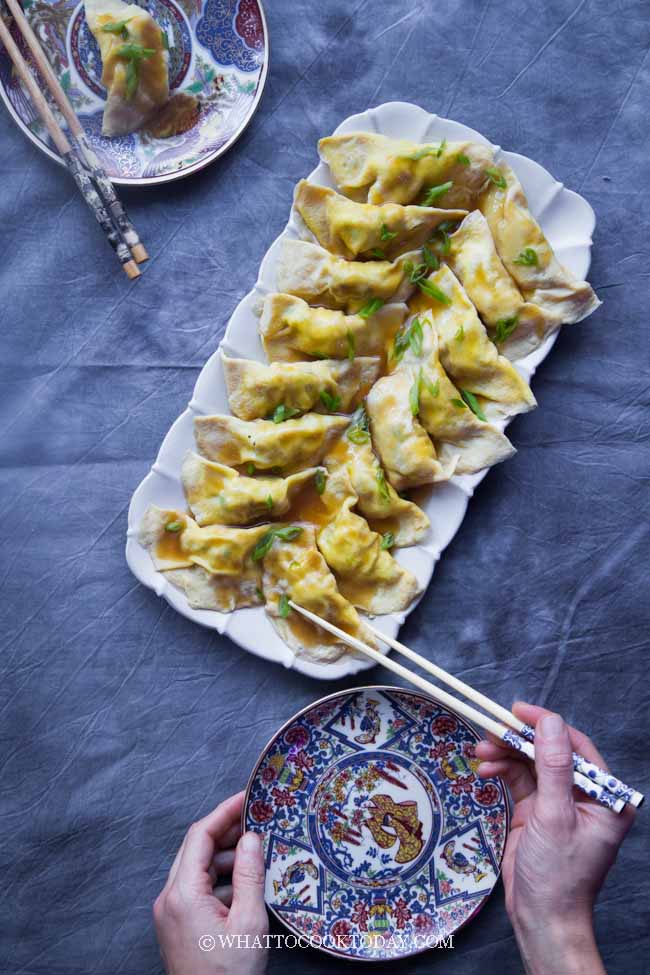 I first learned about the Chinese egg dumplings or known as dan jiao, from Chinese friends. The egg dumplings are commonly seen during Chinese New Year. I was really intrigued because I’ve only seen or eaten dumplings wrapped in a skin made with flour. Immediately, this was on my list to learn to make. Basically, the meat filling is wrapped in individually made egg omelet wrapper/skin. The egg omelet wrapper is basically the replacement for the traditional wrapper made with flour. Hey…extra protein and less carb 🙂

HOW TO MAKE CHINESE EGG DUMPLINGS

1. Prepare the meat filling and marinade for at least 30 minutes 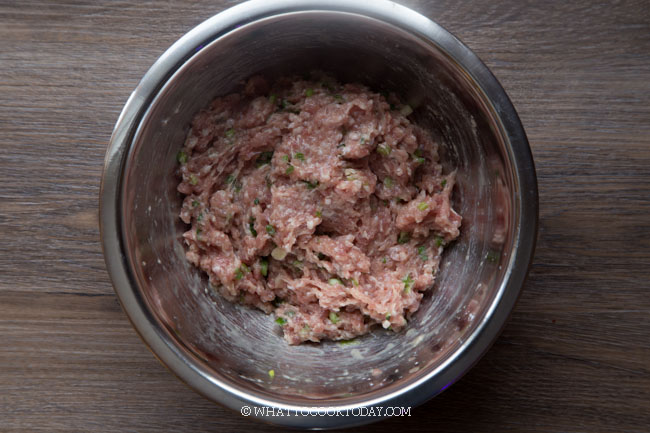 2. Prepare the omelet batter by mixing the beaten egg, cornstarch, and water 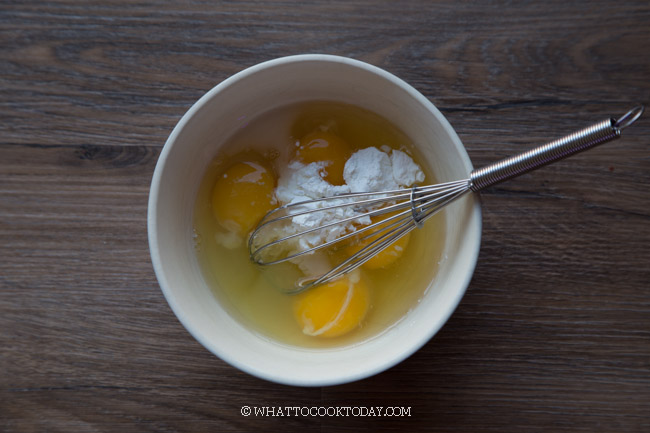 3. Make the omelet wrappers
Spoon about 1 to 2 tablespoon of the omelet batter and use the back of the spoon to smooth into about 4-inch circle. Make sure the heat is low 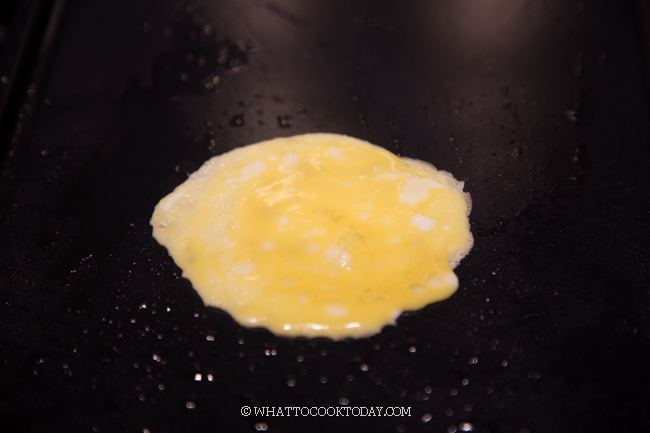 4. The bottom will start to set but we want the top part of the omelet is still “wet” so your dumplings can seal to close better. Quickly spoon about 2 teaspoons of the meat filling on the middle of the omelet 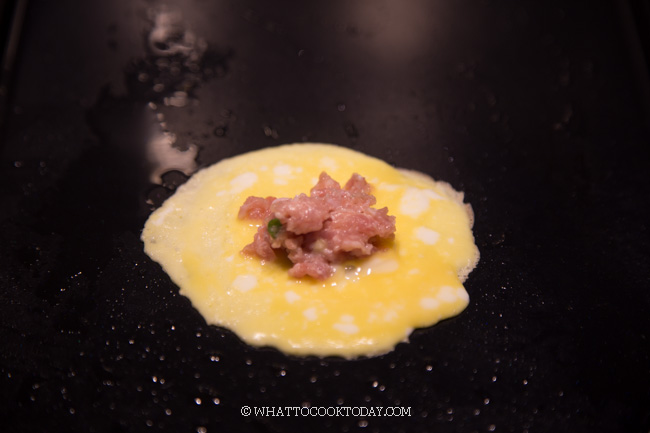 5. Use rubber spatula to fold the other half over and gently press the edges to seal. At this point, the meat filling is still raw, we are just making the dumplings 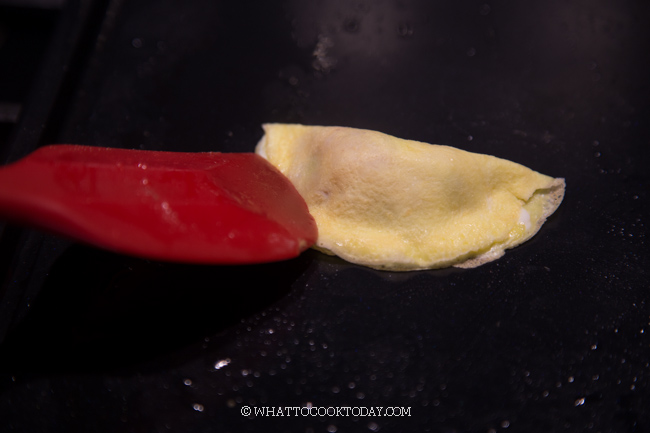 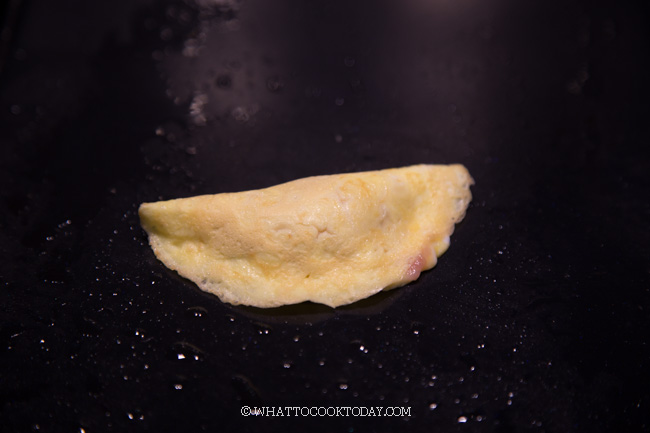 6. Continue with the rest of the egg batter and filling until you run out 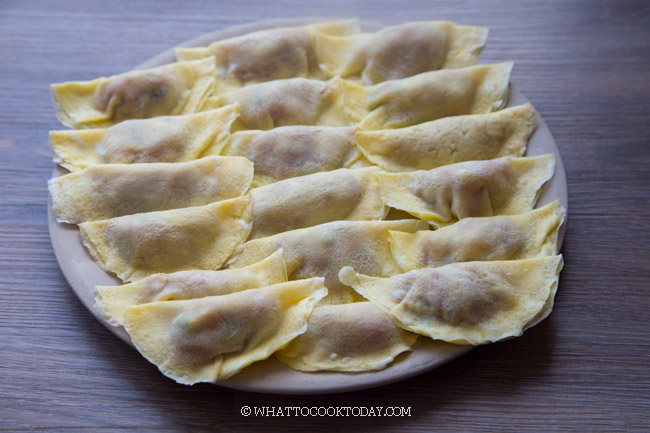 HOW TO PREPARE GRAVY FOR EGG DUMPLINGS

Once you have the egg dumplings, you can use them for Chinese hot pot or cook them in the soup. Or you can prepare the gravy like I did for this recipe to serve with the dumplings. Here are the steps:
1. Pour chicken broth, soy sauce, oyster sauce, sugar, and wine in a large pan (with a lid). Bring to a boil and add the dumplings 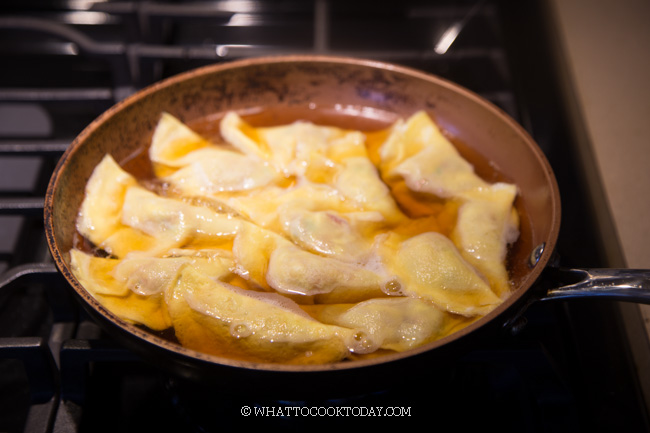 2. Cover with the lid and lower the heat to medium low and cook for 5-8 minutes or until the meat filling is cooked 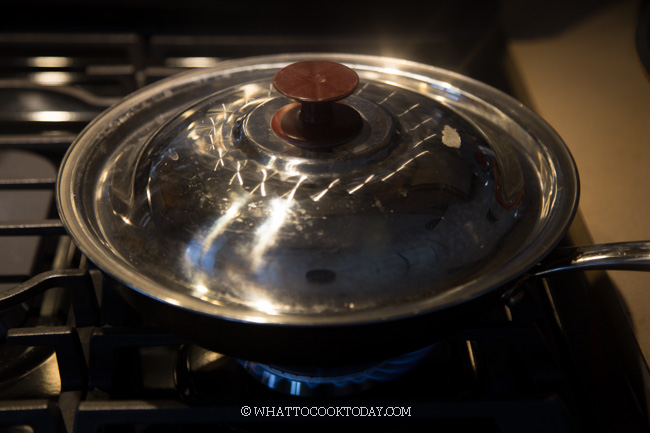 3. Use a slotted spoon to remove the cooked dumplings. Bring the chicken broth back to a boil and stir in the cornstarch mixture 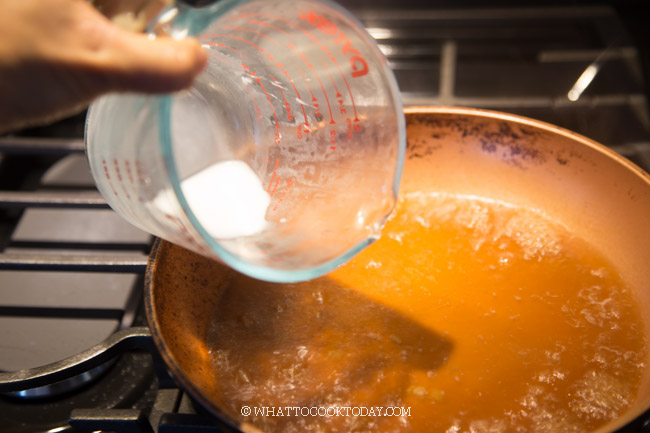 4. Cook until the gravy is slightly thickened 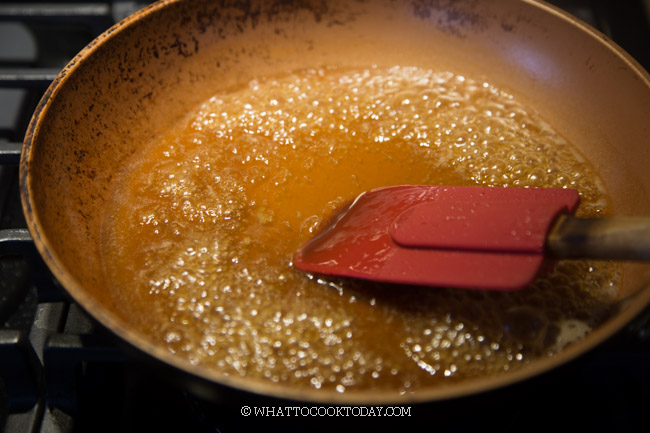 5. Pour the gravy over the egg dumplings 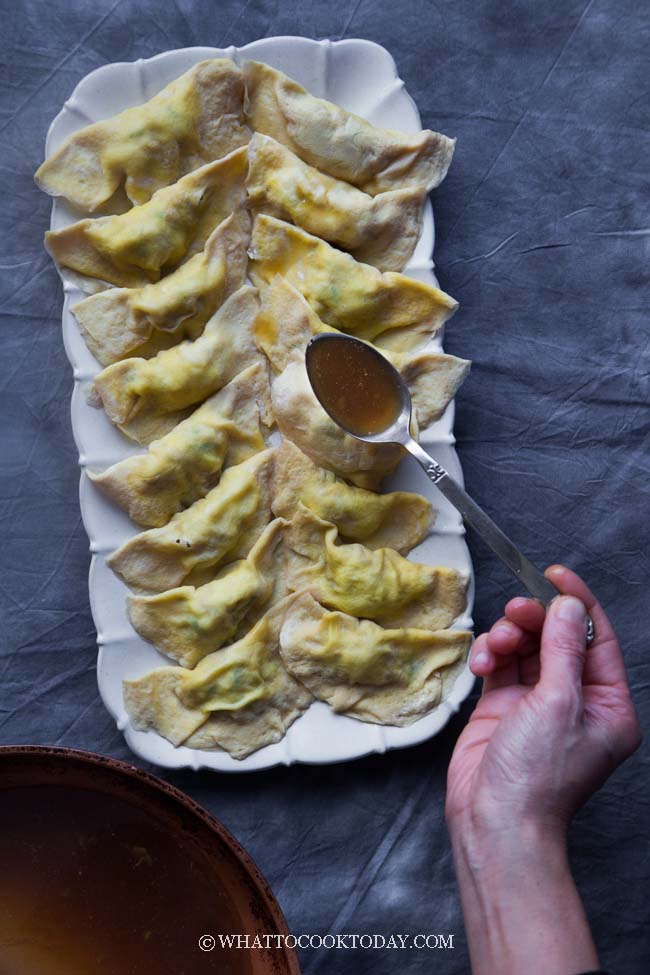 I love making these egg dumplings. It may seems more complicated than it is, but the egg omelet wrappers are actually pretty straight forward to make.

1. Do not overfill the dumplings
When you make your first few dumplings, start out with probably about 1 teaspoon of meat filling until you get the hang of it. If you stuff too much filling in there, you are risking tearing the omelet
2. Make sure you have everything you need within your reach
Line up the egg batter, meat filling and empty plate all within your reach. The egg cooks pretty fast and so you want to work quickly but not in a panic way 🙂
3. Control the heat
Make sure the heat is low when you cook the omelet. We want the top of the omelet is still wet when you place the filling on top and so when you fold the omelet over to form a half-circle dumplings, it will seal 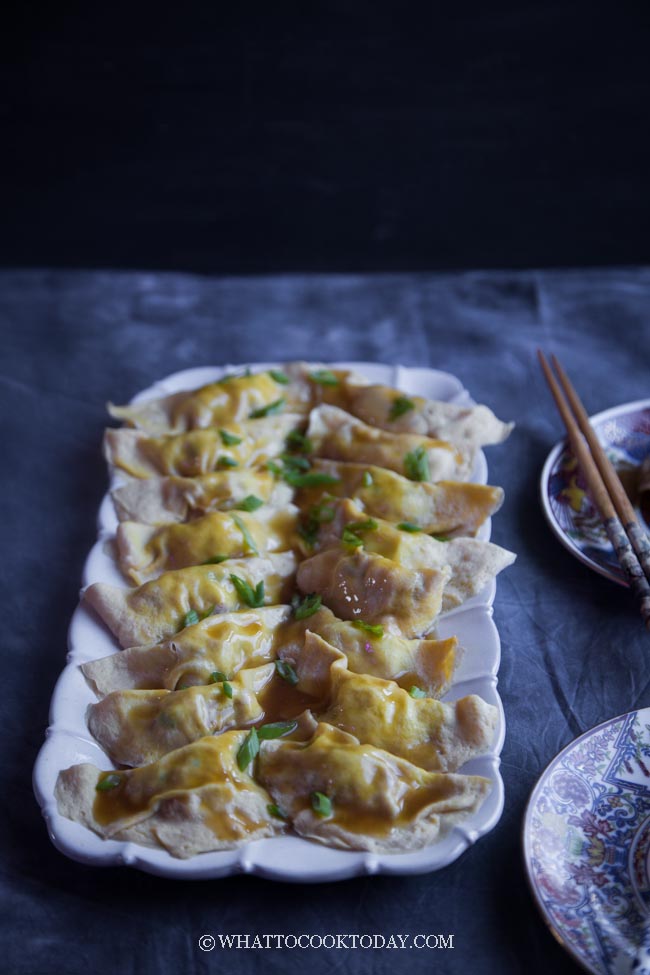 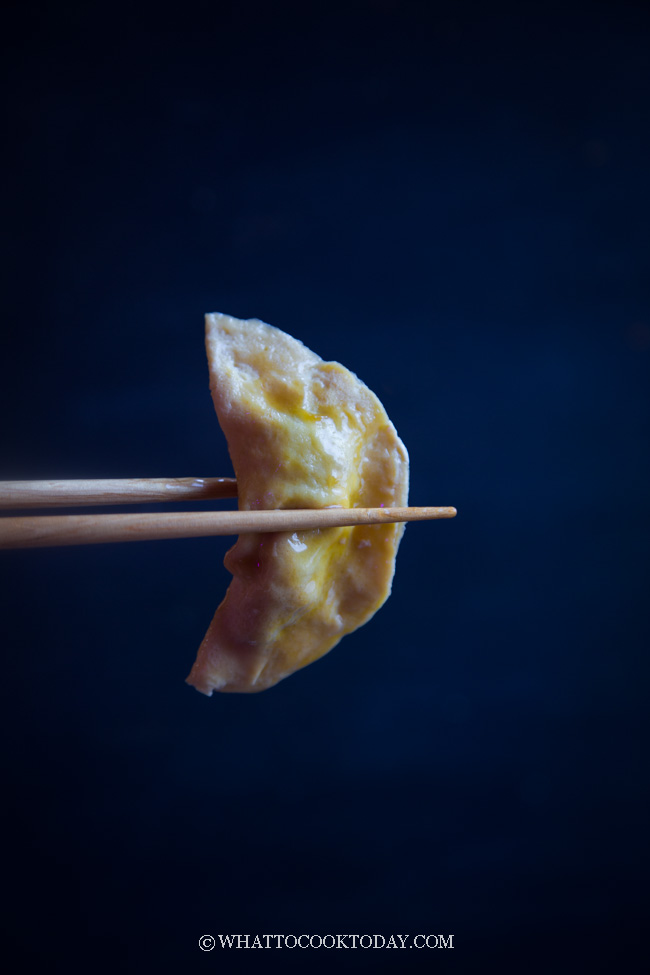 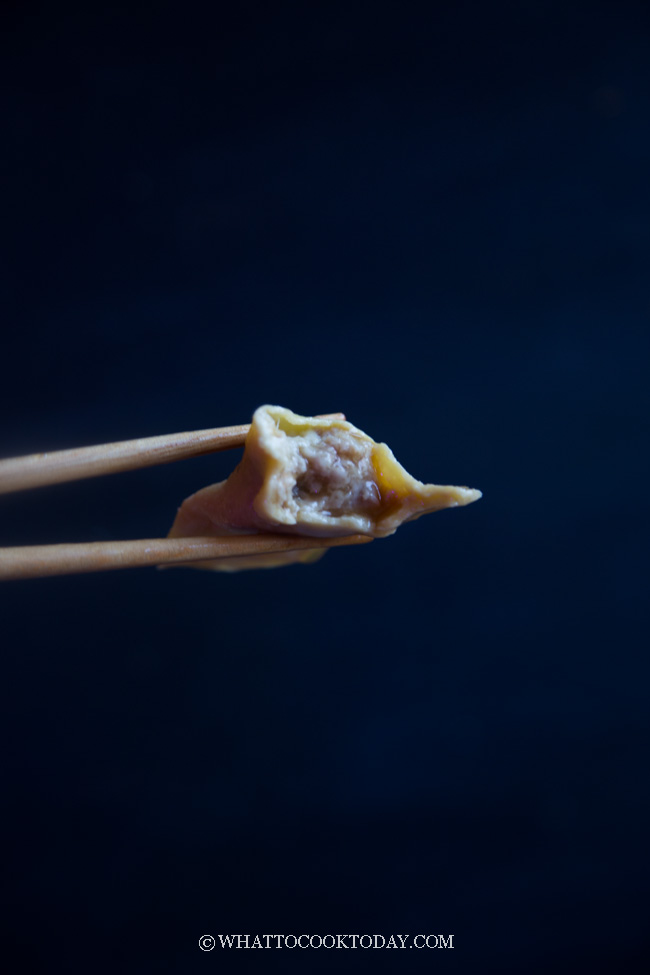 This recipe is beautiful. Soft, succulent dumplings packed with flavour. I served with my own homemade chilli oil.

I’m glad you like Rebekah! and yum to the chili oil!

Hey marv, great recipe, I was just wondering though, could you fry the dumplings instead of cooking it in gravy or soup?

Hi Yodi, that’s a very good question. I haven’t tried this myself. I don’t see why you can’t. Deep frying or you can try a method like cooking potstickers by browning them on both sides with some oil and then pour a bit of water and cover to let the steam cooks the filling inside and then uncover and let the water evaporates and the oil will continue to cook the dumpling until they are crispy outside. I think it will work that way too.

Am definitely going to try these. I have keto friends & this will be right up their alley.

Hi Michelle, this will be keto-compliant 🙂 I hope you like it if you have a chance to try it out!