What is duck confit ? I heard it all the time. Never tasted it though. However, I know that a plate of one duck confit doesn’t come cheap.

So, here’s what I learned about Confit from both Anthony Bourdain’s Les Halles cookbook and Michael Symon’s Live To Cook cookbook. Confit is the easiest way to preserve meat at home. Typically meat that is used for confit are duck, goose, or pork. The meat is briefly cured with salt and seasoning, cooked very gently for hours and hours, submerged in its own fat-and then cooled and chilled in the fat. The meat can then be reheated and the skin crisped for the most deeply seasoned, soul-satisfying, succulent morsels YOU HAVE EVER TASTED!!!!

Do you know that duck fat is so very flavorful ? That’s why duck confit is so yummy because of all those duck fat. You can use olive oil or lard, however, solid fat (like duck fat) works as a more efficient preservative.

Perhaps the next question is..where to get the duck fat ? Well, I actually rendered my own duck fat from the duck’s skin. The duck fat can be found in gourmet stores, online, and at Whole Foods store. I can tell you though, this dish is not something that I will do often. It’s super delicious, however, yeah…I know what duck fat is. Saturated fat and we all know too much of saturated fat can’t be too good for ya! So, once in a while, it’s okay to splurge. Besides, this dish takes time to prepare, so that’s a good thing because it’s not something I’d do often either lol!

I used the ingredients for the duck confit from Anthony Bourdain’s Les Halles cookbook, but in this recipe, I included Michael Symon’s duck confit cooking method, because I feel that his actually resulted in a far more tender duck confit 😉 So, this recipe combines techniques from both culinary giants. 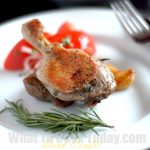