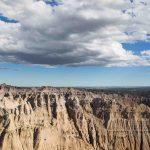 SIOUX FALLS, SOUTH DAKOTA
We drove from Minnesota to South Dakota and our first stop was a city called Sioux Falls, about a 3-hour drive. Pretty reasonable driving distance. It was afternoon when we got there and it was cloudy and raining on and off.
We still managed to visit this place call FALLS PARK. The Big Sioux River tumbles over a series of rock faces in Falls Park, which includes an observation tower and the ruins of the 19th-century Queen Bee Mill. This park is absolutely beautiful. There was a wedding going on there too when we arrived.
This photo was taken from the observation tower overlooking the entire park. 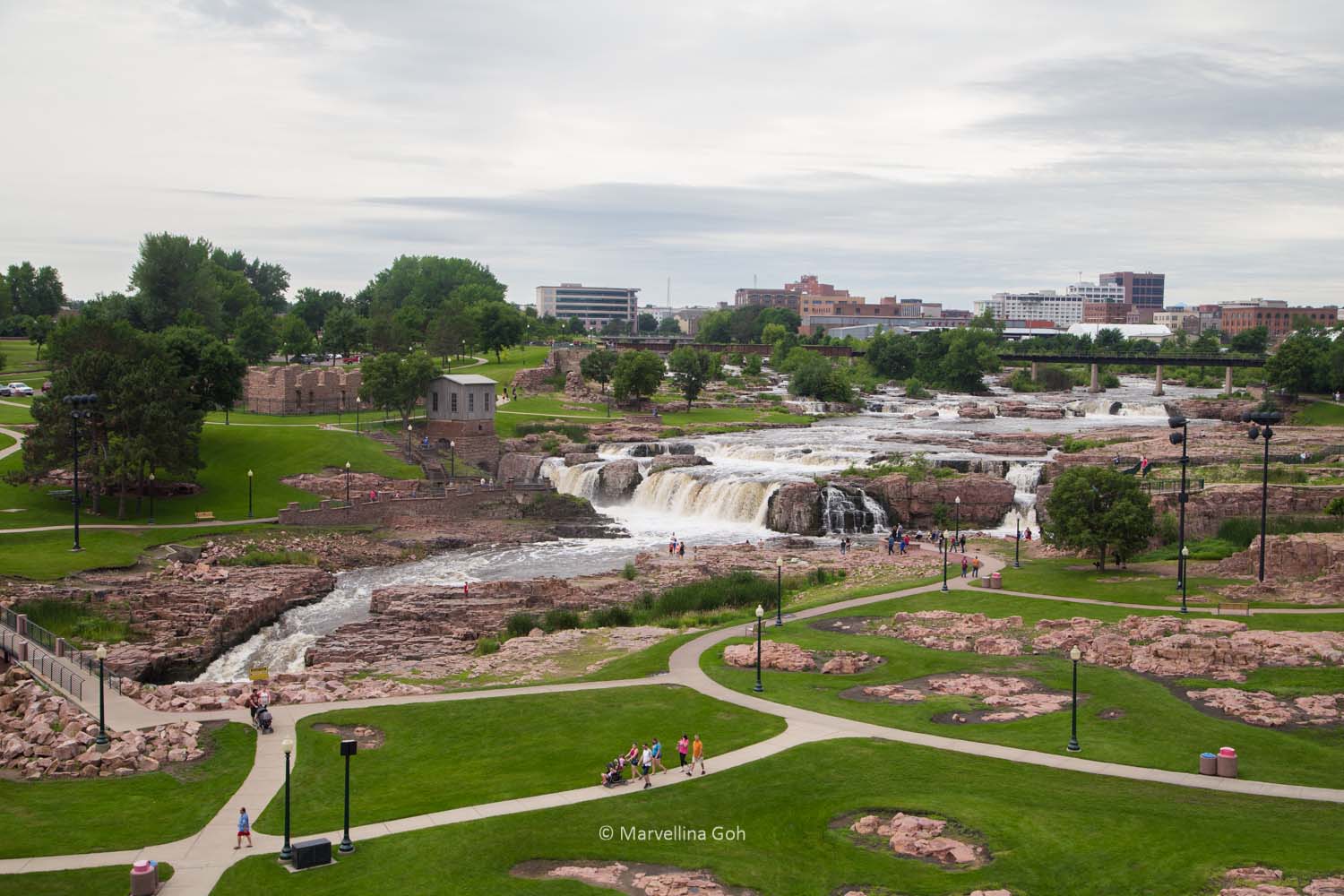 I’m amazed by these beautiful rock formation I’ve seen throughout South Dakota (wait until you see the Badlands!) 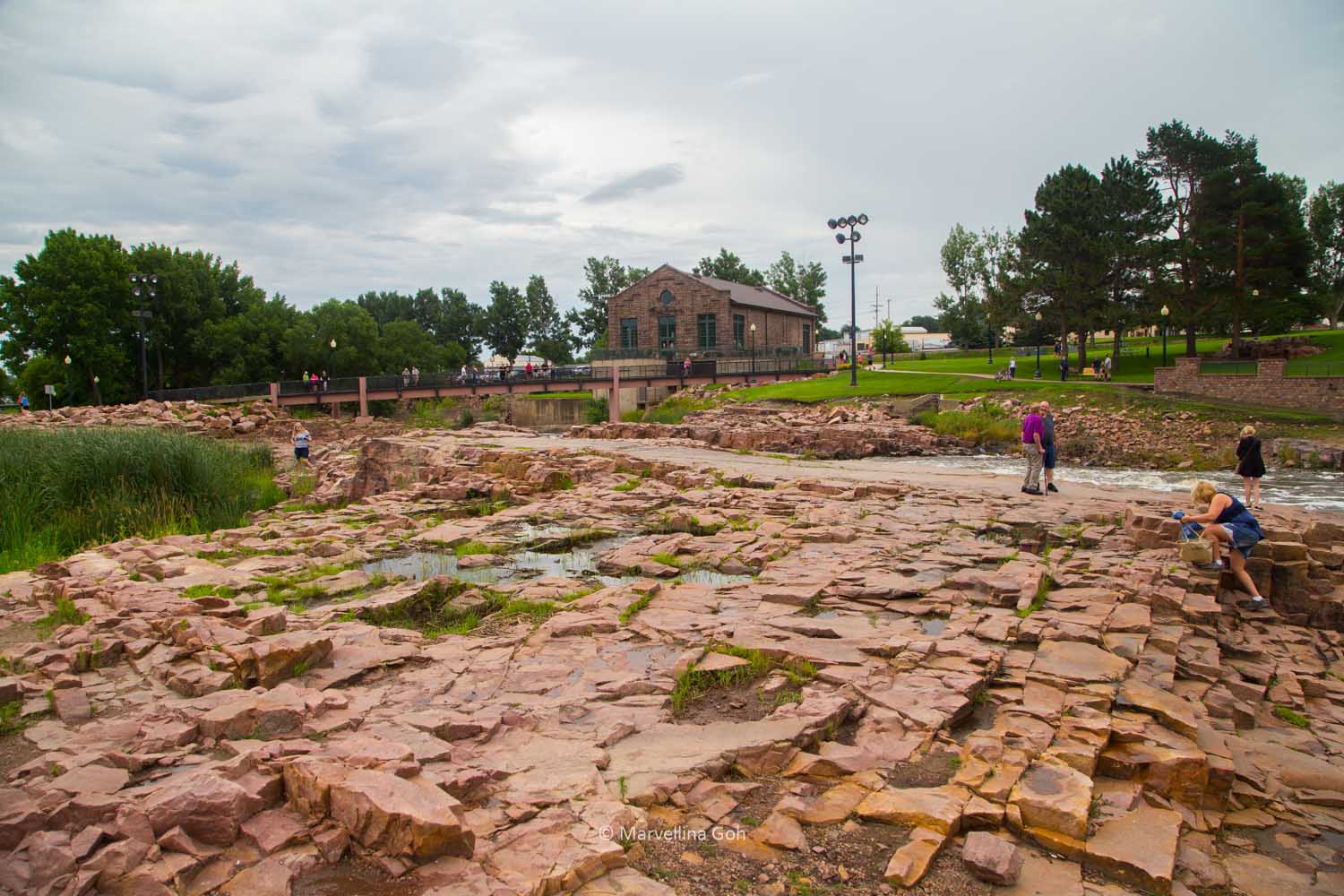 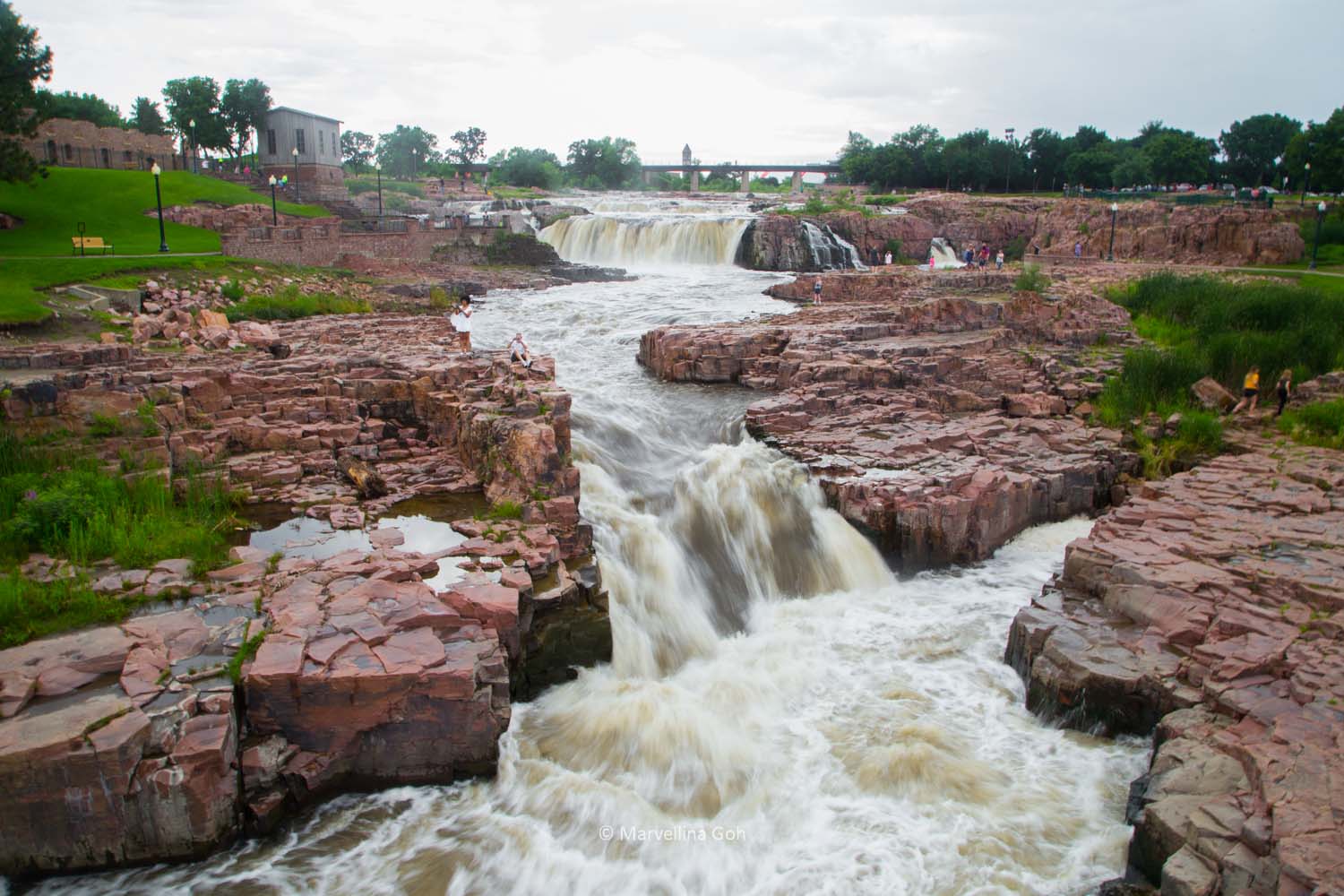 SIOUX FALLS TO BADLANDS NATIONAL PARK
The drive from Sioux Falls to Badlands took us about 5 hours (with food and toilet stops, you know…2 kids!). But these two kids were troopers. They slept, the entertained themselves (not by watching ipad or any electronic devices), they made jokes. We were impressed! 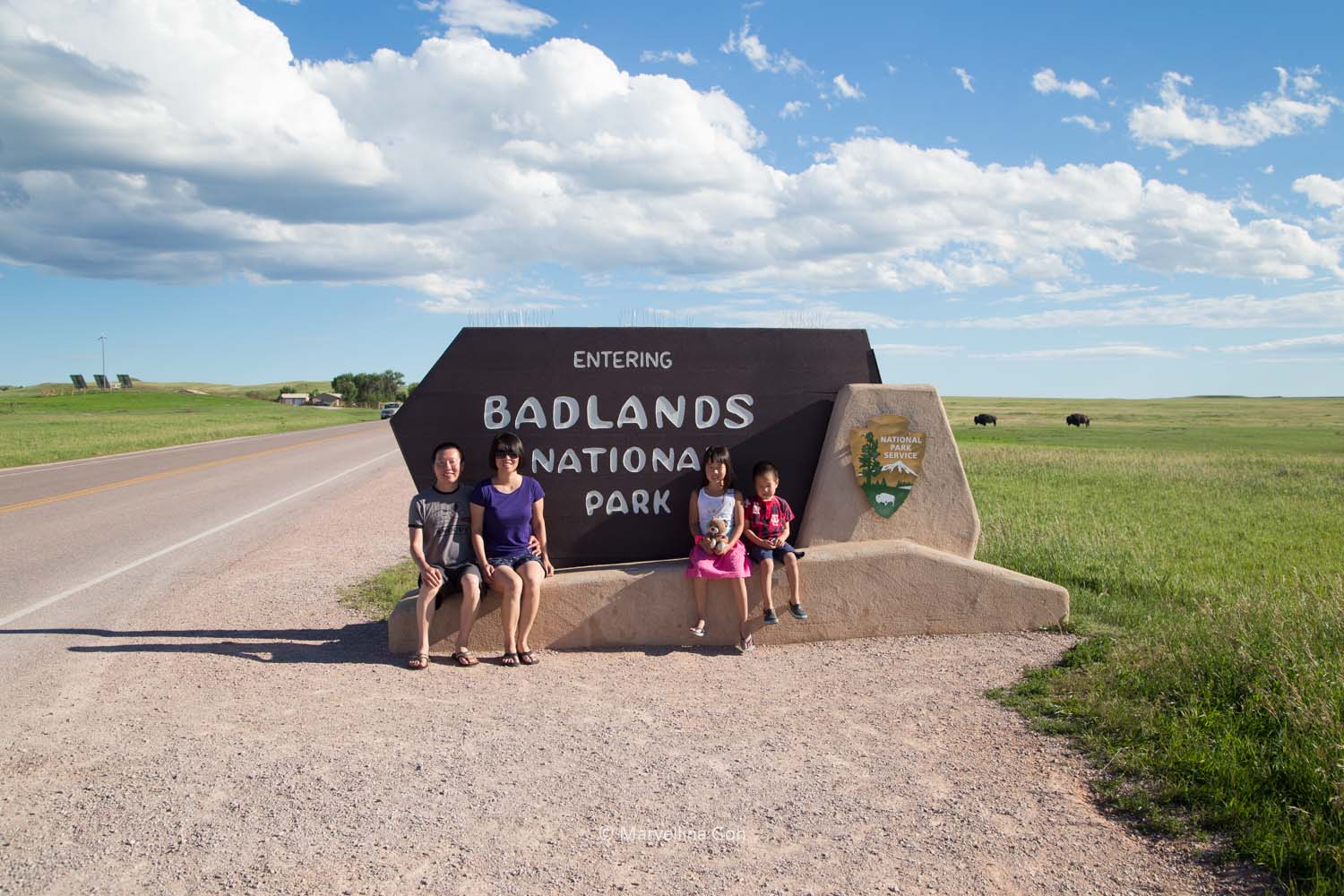 Our drive through the badlands national park was a breathtaking one. The dramatic landscapes span layered rock formations, steep canyons and towering spires that are just so beautiful we made frequent stops to take photos (only about 100+ photos from badlands alone!). The deposition and erosion over the past 60-70 million years ago created such beauty we call badlands.

It was called badlands because the Native American, or the Lakota people called it Mako Sica meaning Land Bad. It was hard to travel through this rugged land especially back in the old days where transportation is extremely limited.

I seriously couldn’t get enough of this rugged beauty! We pretty much spend half of the day here admiring the beauty and the gorgeous blue sky to boot! 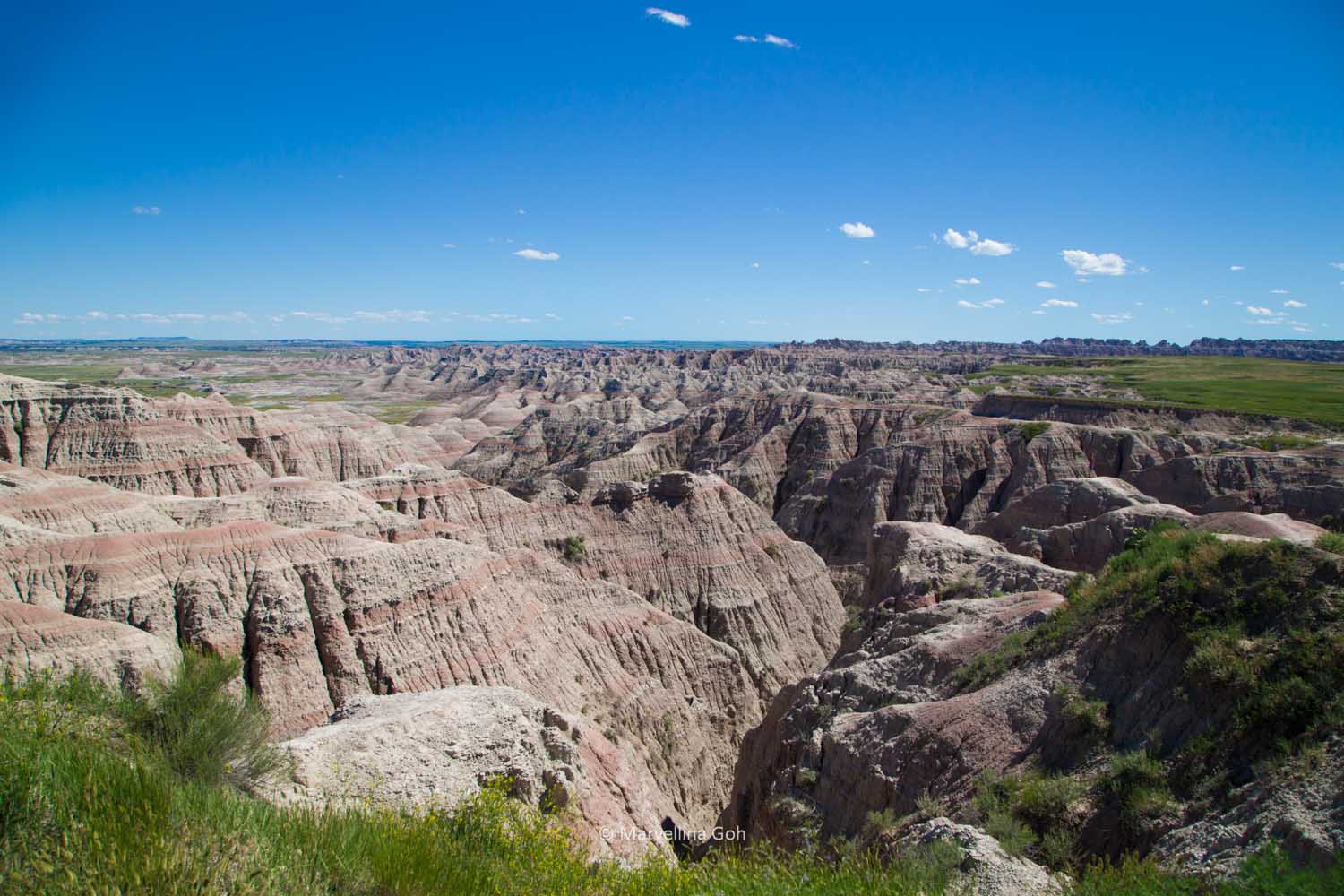 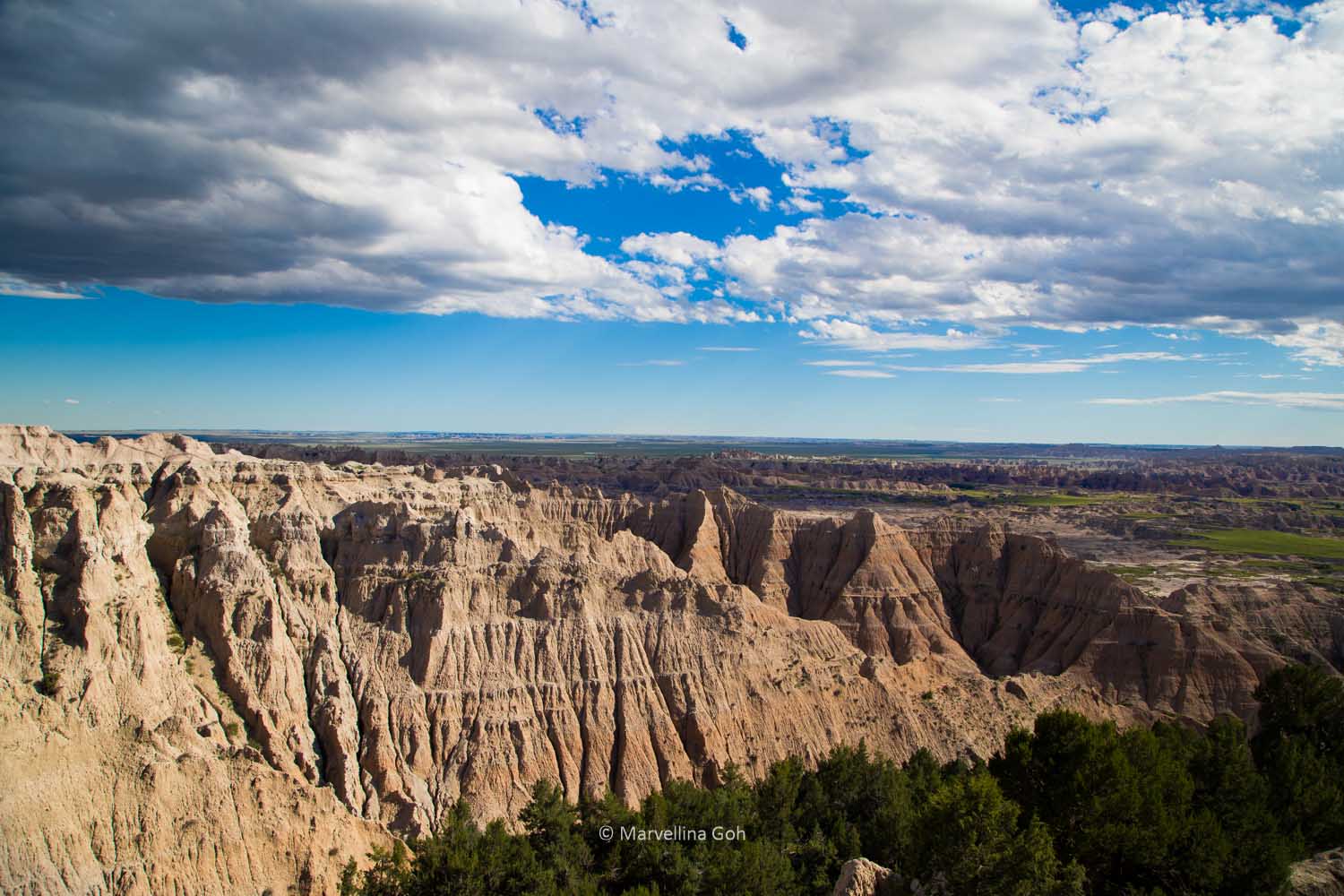 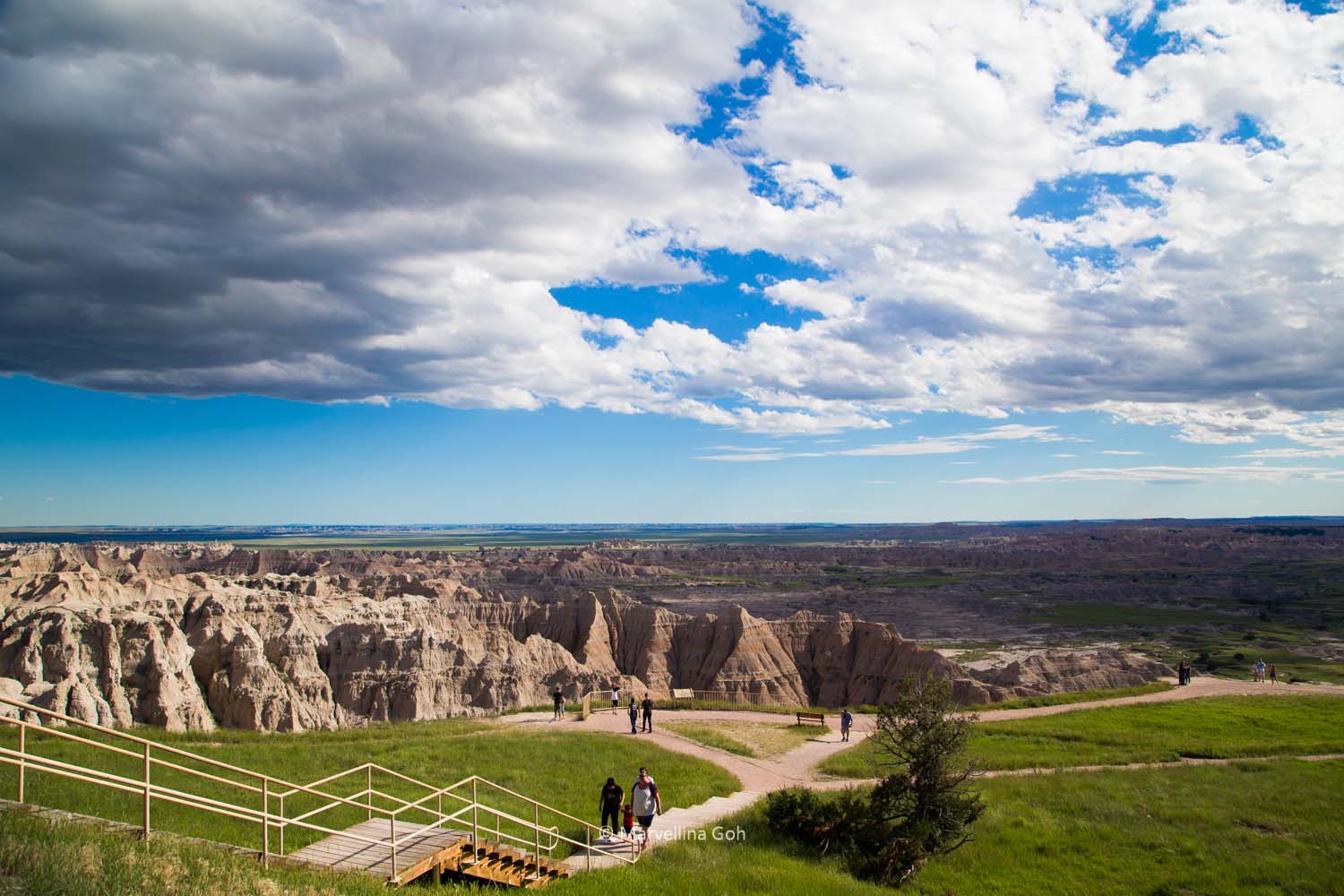 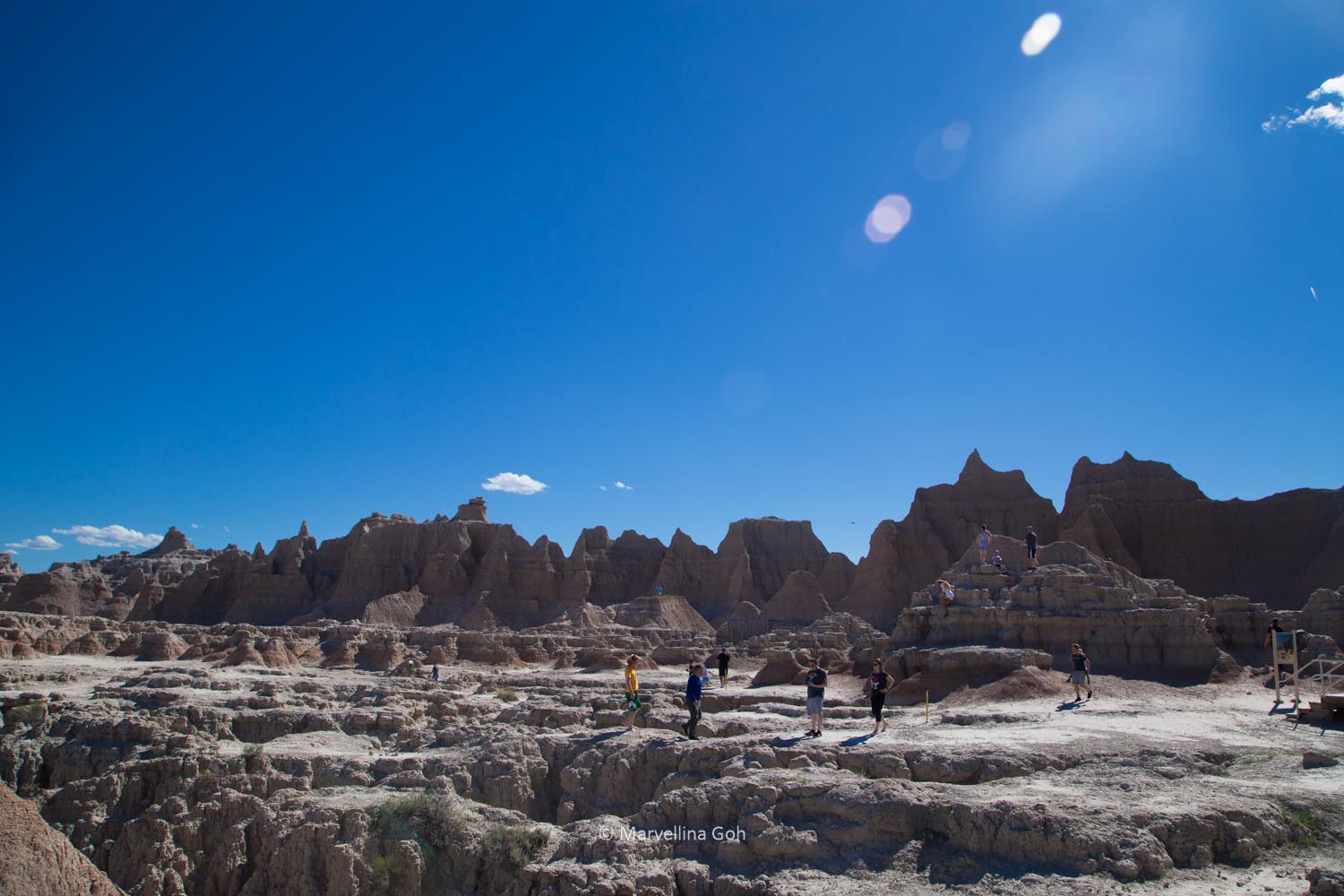 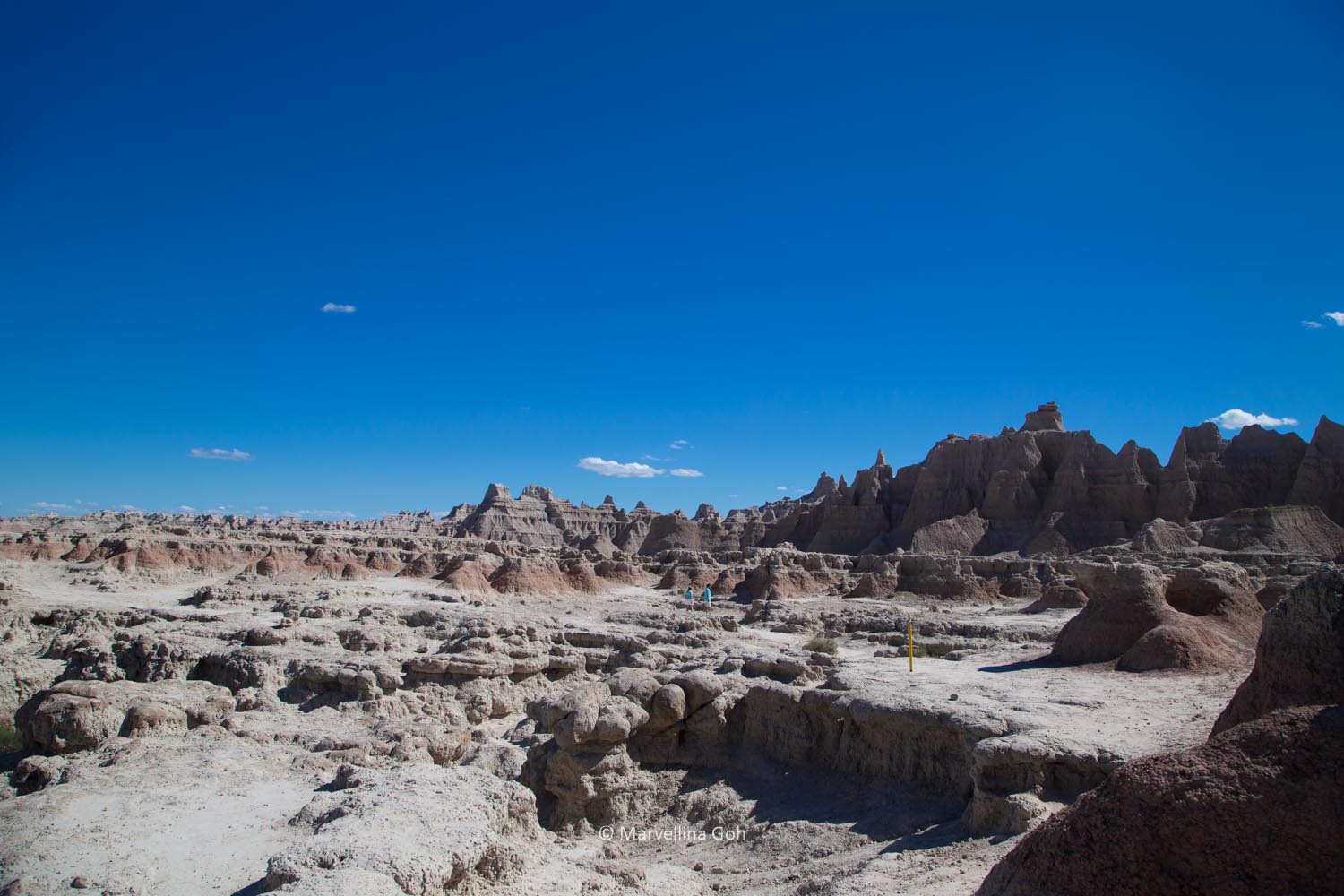 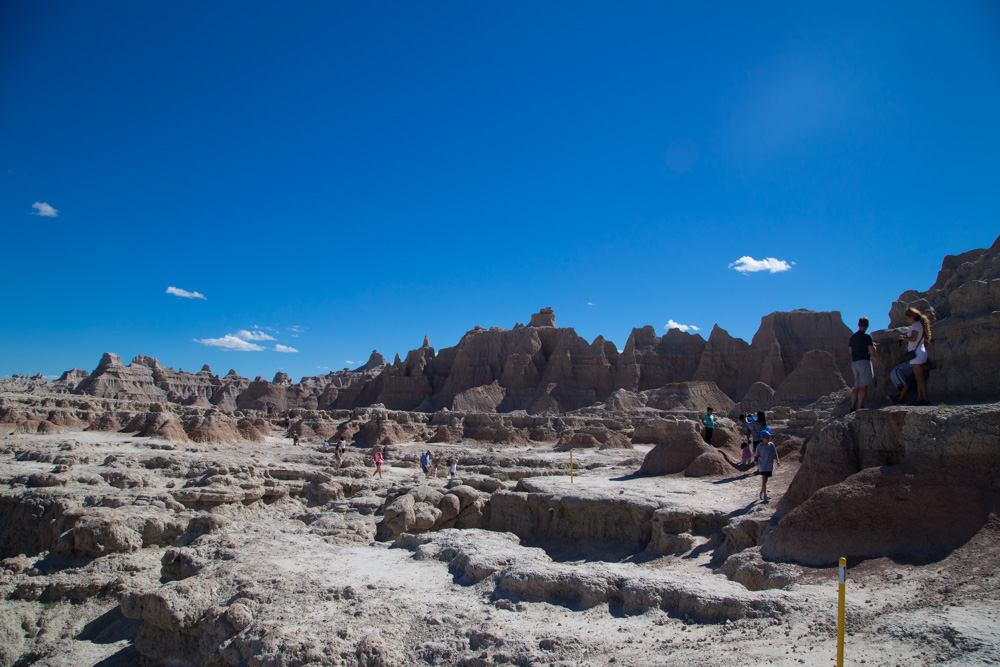 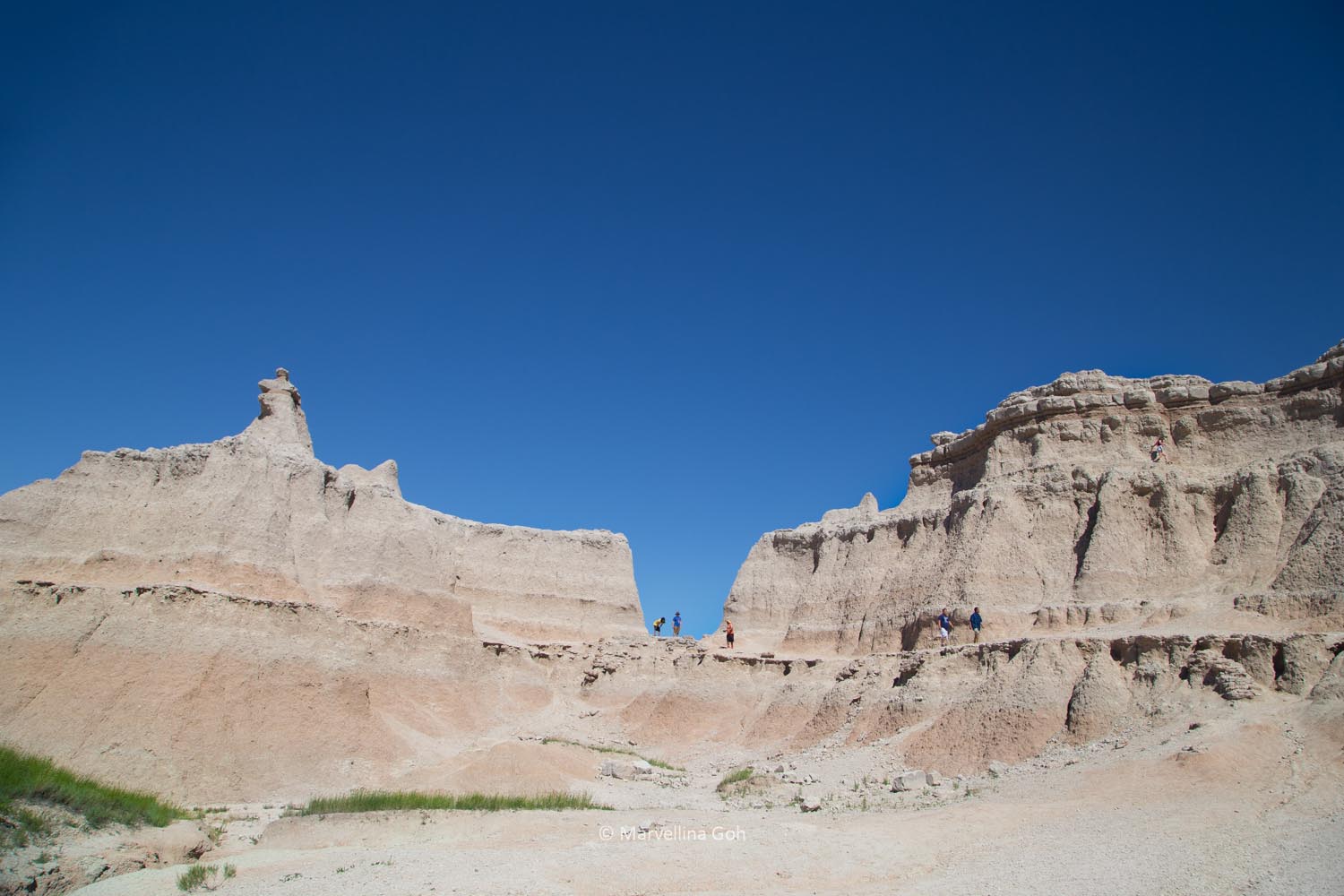 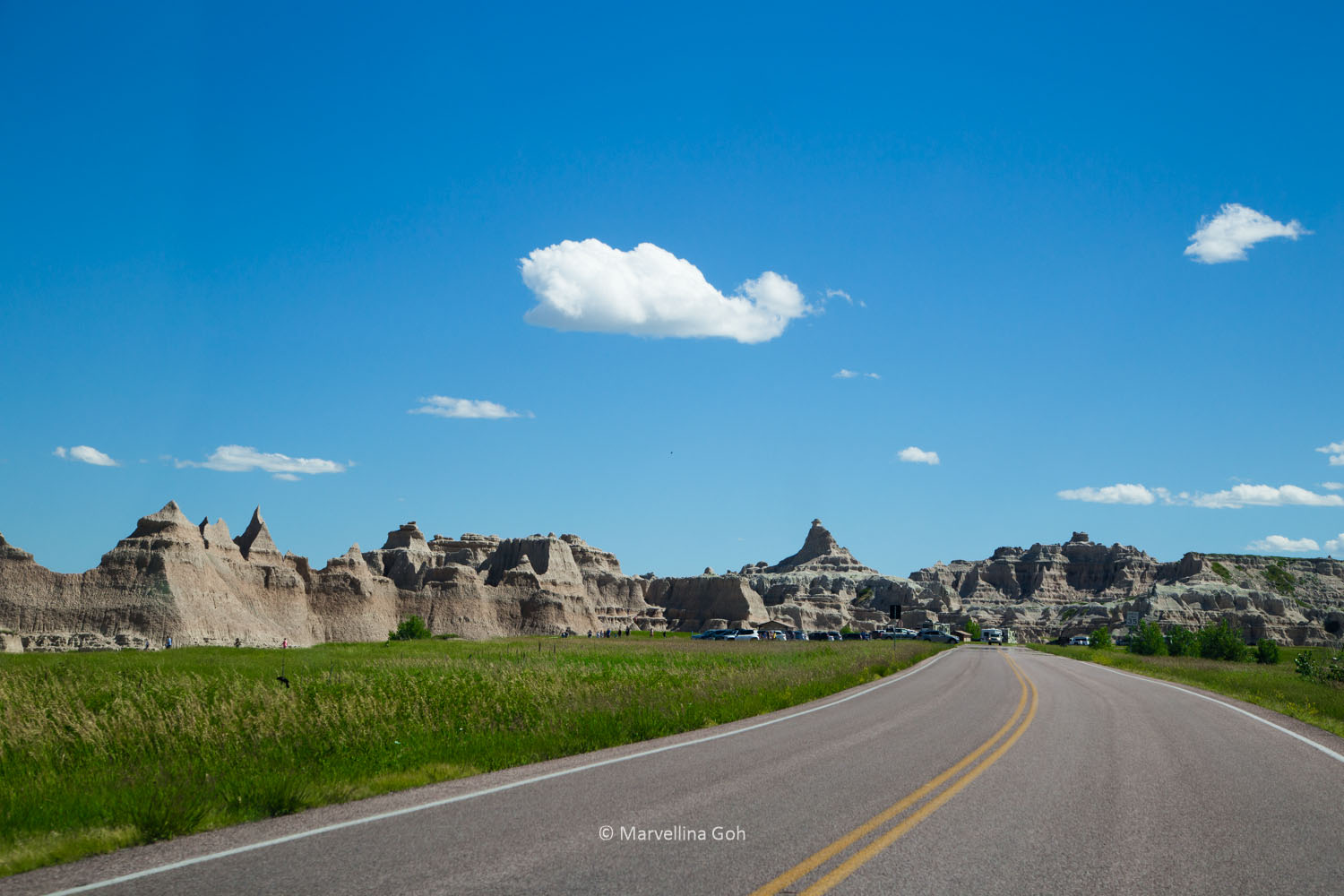 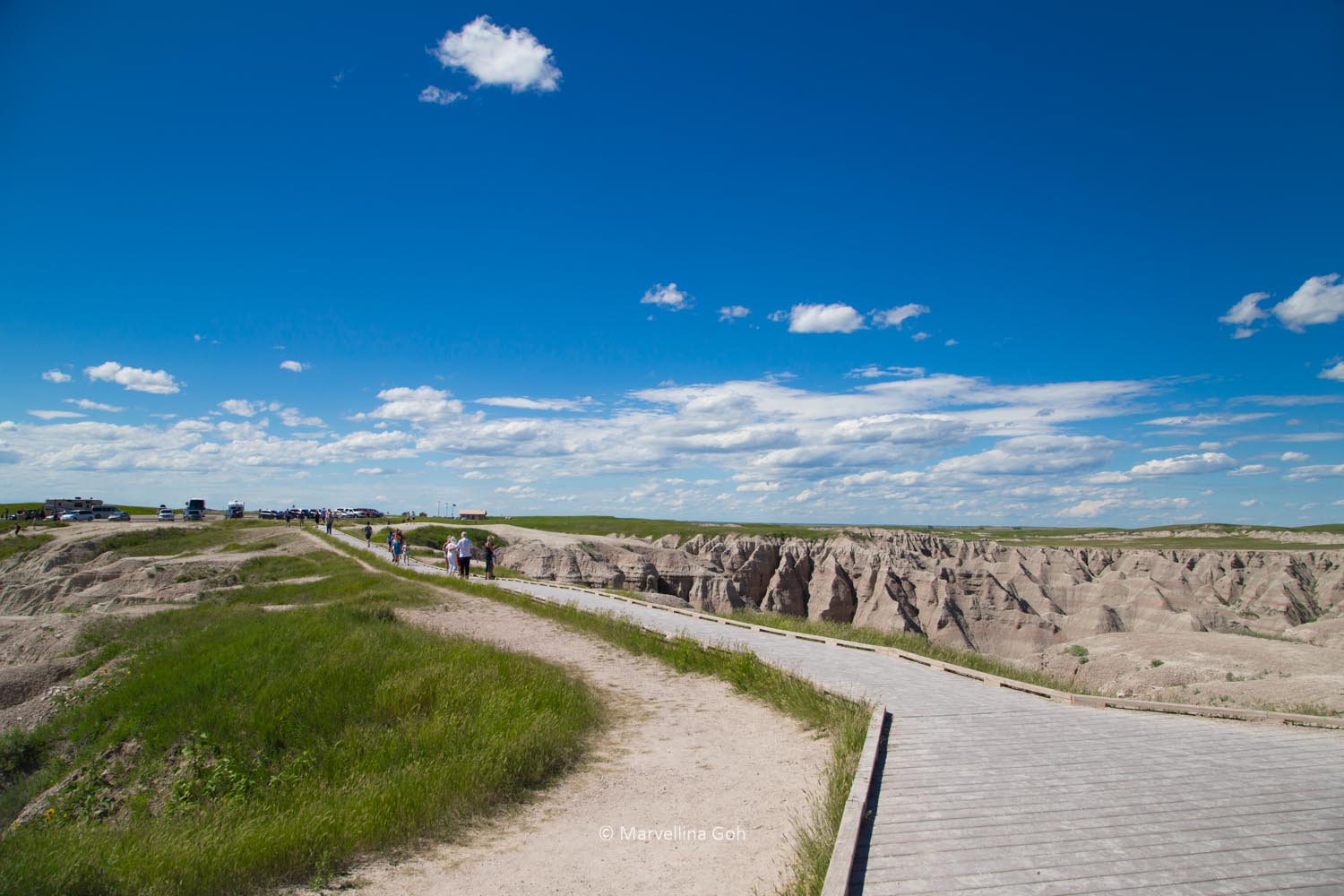 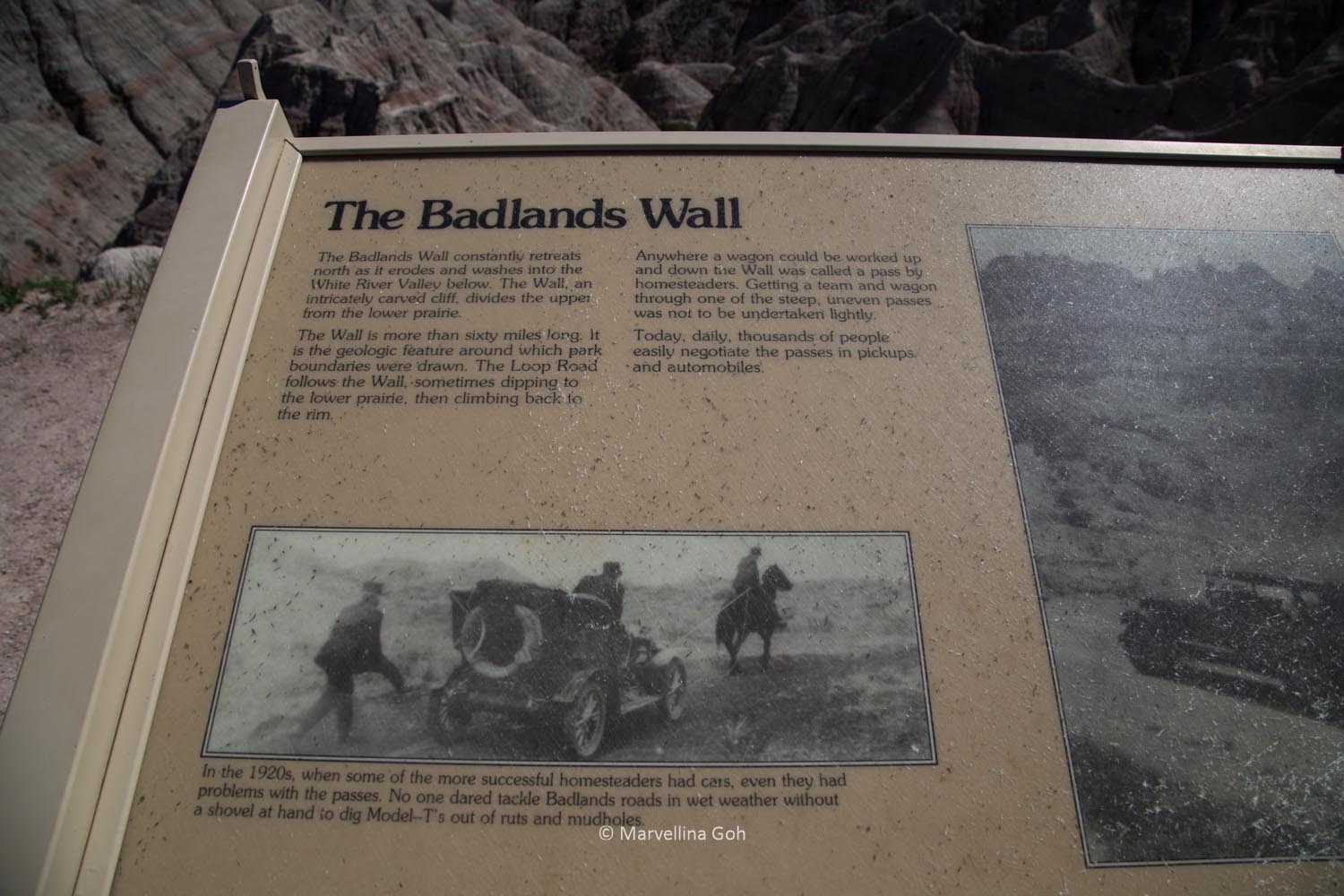 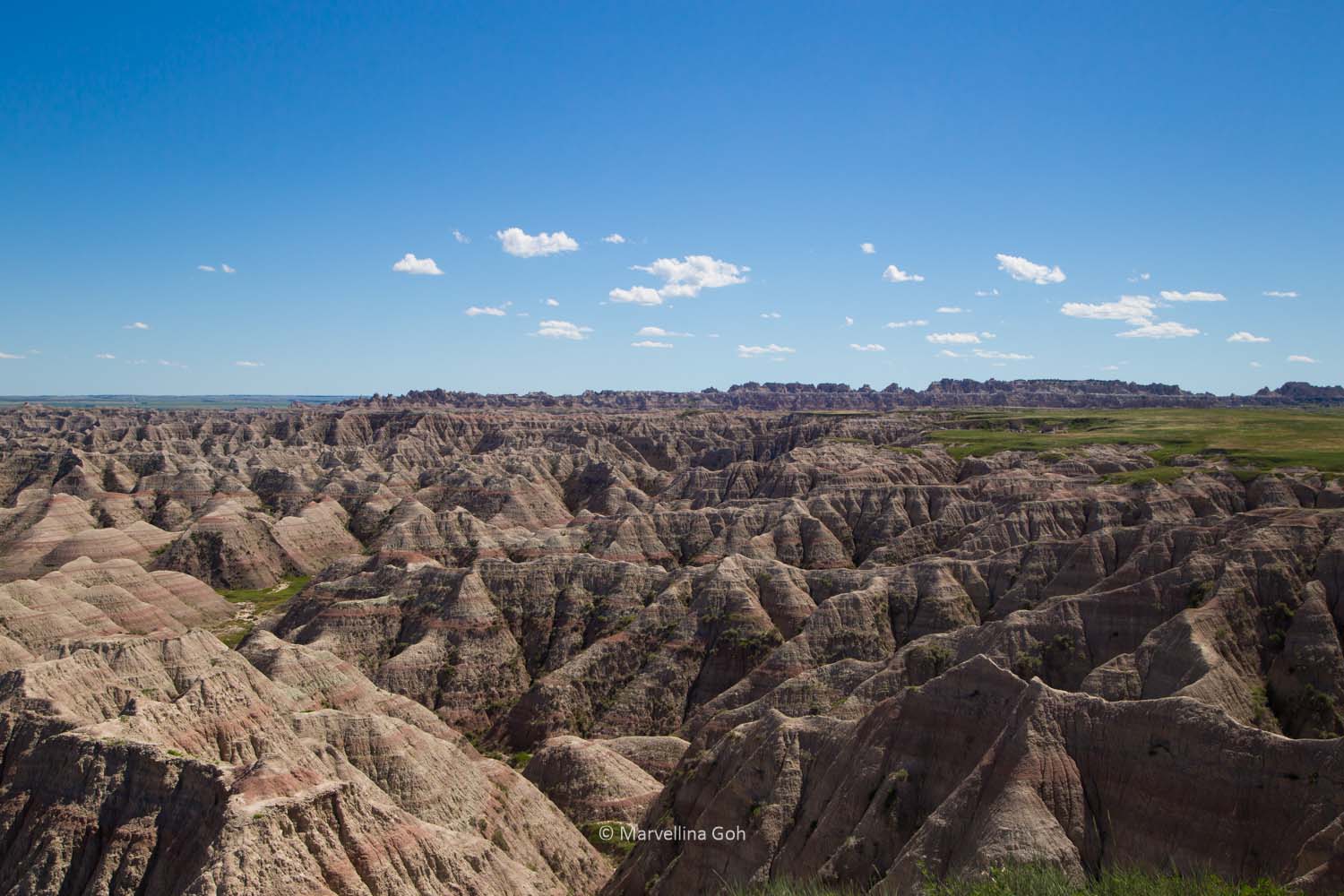 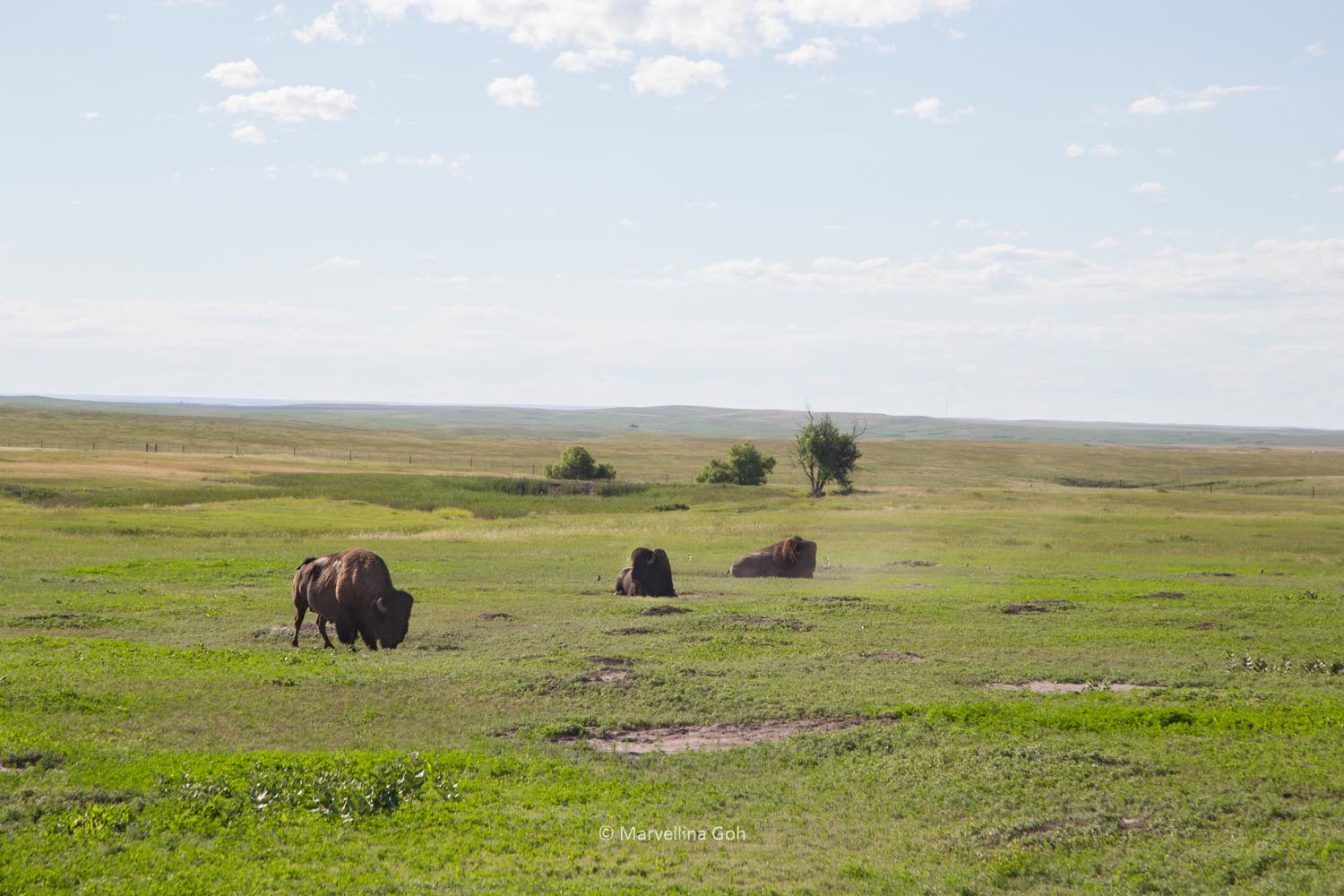 From Badlands, we drove to Rapid City, another small city in South Dakota and spent a night there. We didn’t really do much here other than having dinner and did a little stroll at Rapid City downtown.

MOUNT RUSHMORE NATIONAL MEMORIAL
From Rapid City, we drove to Keystone, where the Mount Rushmore Memorial is located. Our 7-year old daughter told us before when she was at Kindergarten that she wanted to see the Presidents sculptures.
It’s a very neat place to learn about the history of how the sculptures were made and the history of each of the president that was chosen to be carved in this national memorial. We toured the museum and watched a short movie about how they made the sculptures. 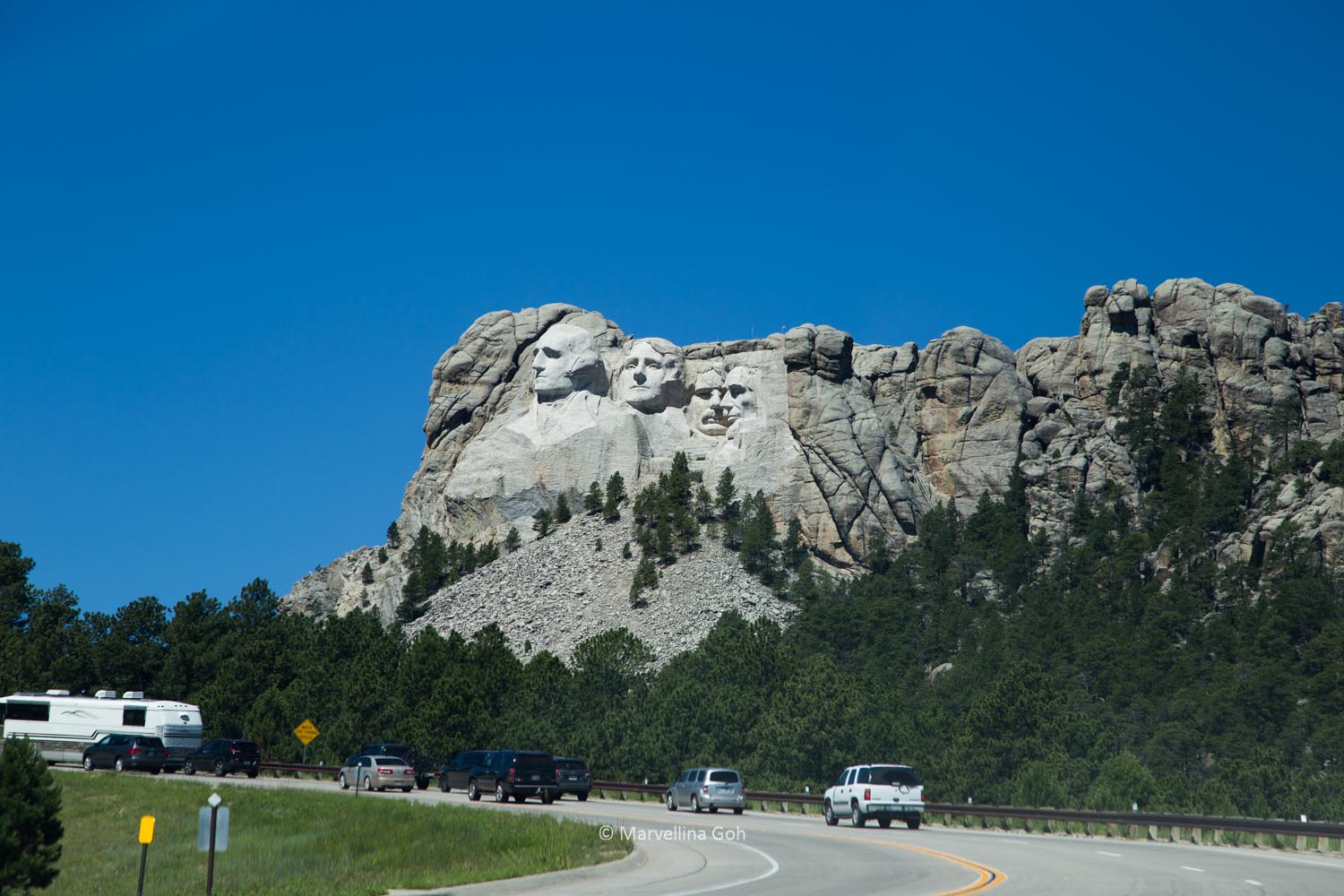 You can already see the sculptures on your way before approaching entry gate. 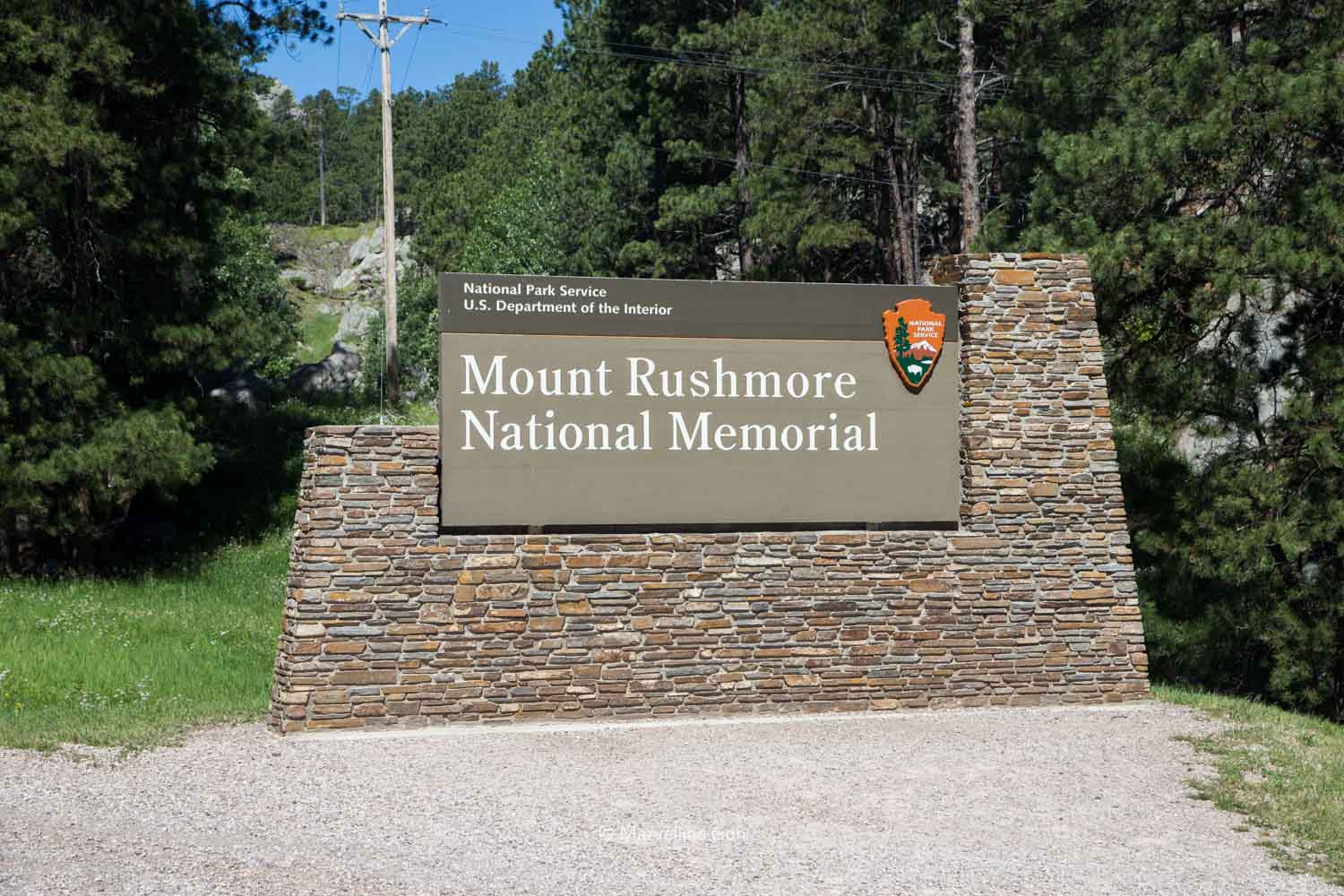 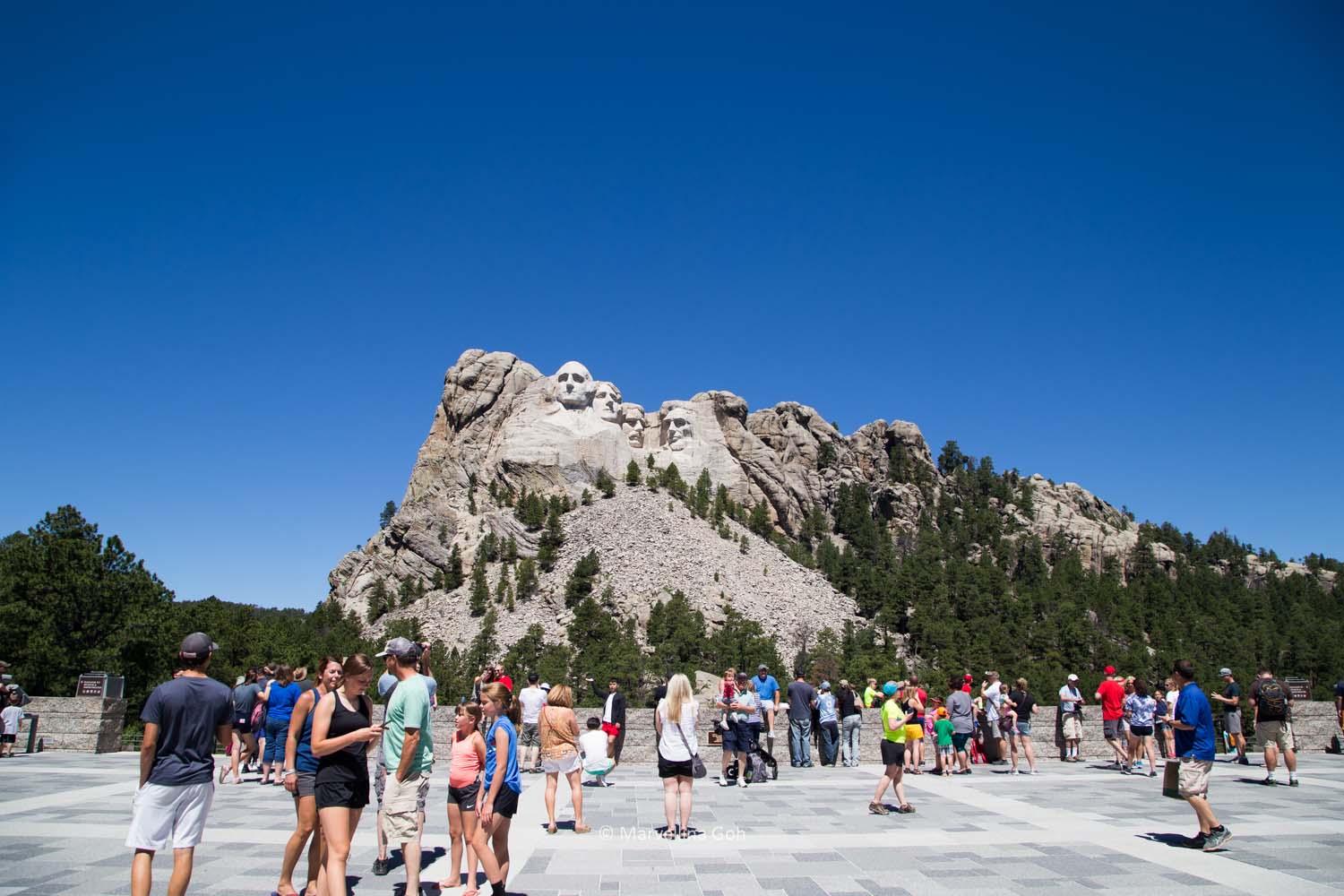 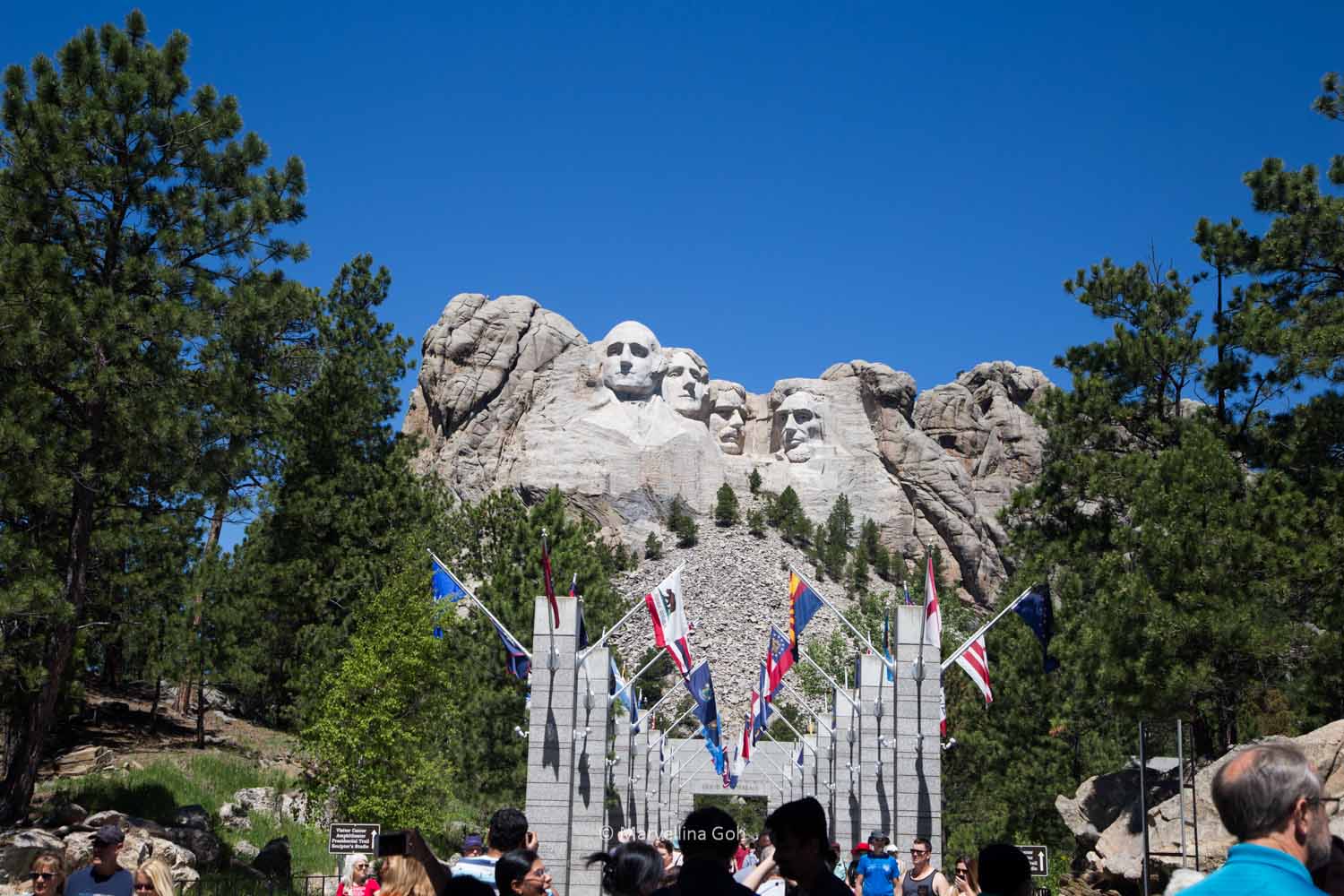 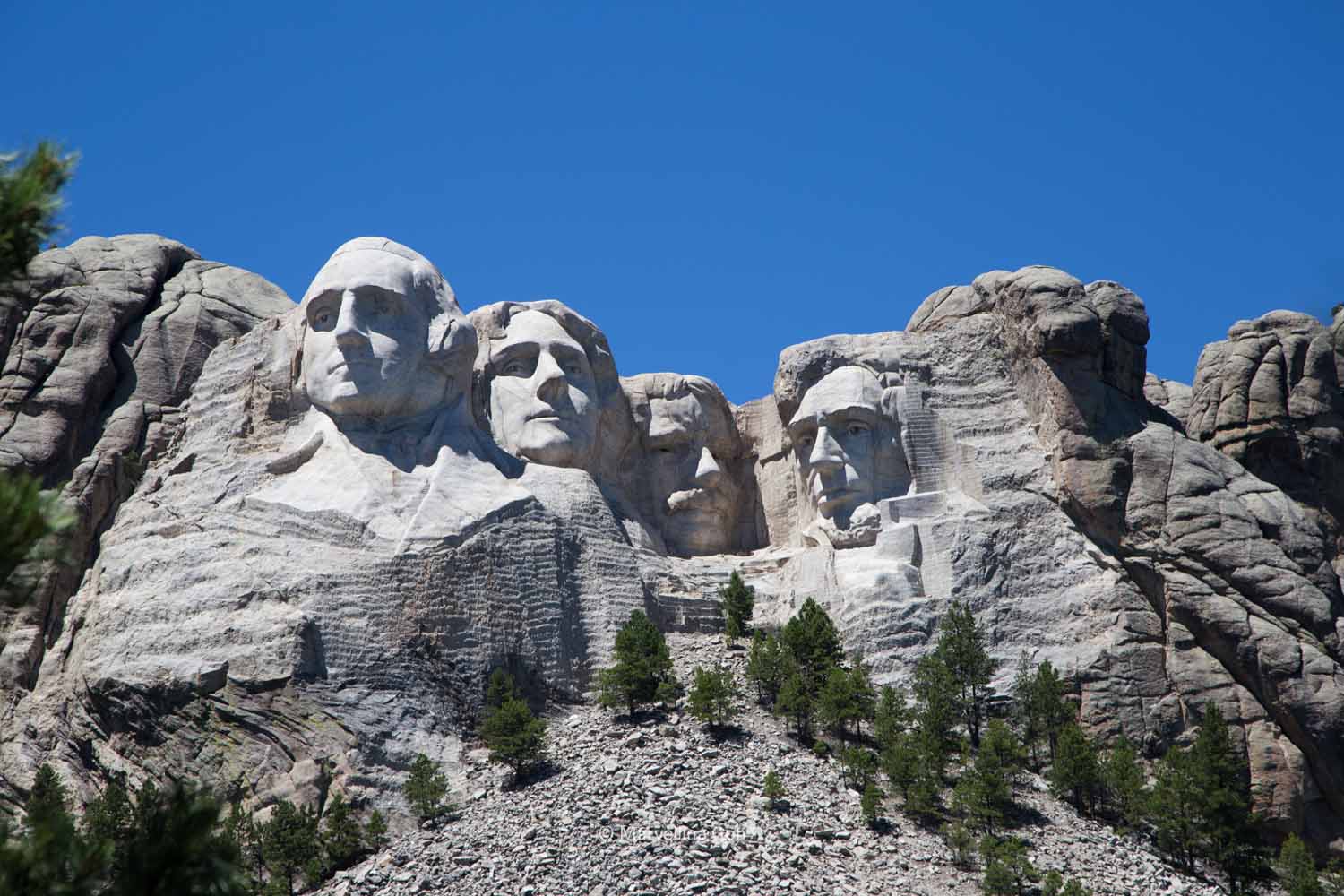 We spend probably 3 hours there and then we proceeded to Wind Cave National Park, about 1 hour from Mount Rushmore National Memorial. This was recommended by a friend and it’s really a must to see!

The only way to see the cave is through the guided tours. You are not allowed to tour the cave yourself. They offer 3 different levels of tours: easy, moderate, strenuous. When we got there it was 4:30 pm and the easy tour was already sold out. We weren’t sure if our 4-year old could handle the moderate tours (about 300 steps). He was a bit grouchy and cranky and so we just skipped. We were a bit bumped that we couldn’t see the wind cave (our son was so ready with his flashlight!), but we did go to see the “hole”, the park’s only natural opening. If you stand in front of the hole, you can feel an extremely strong wind blew out from there. The loud whistling noise of the wind through that hole led to the discovery of the Wind Cave.

The “hole” is next to where my 4-year-old (in yellow polo) stood. Yes..that black dark hole! 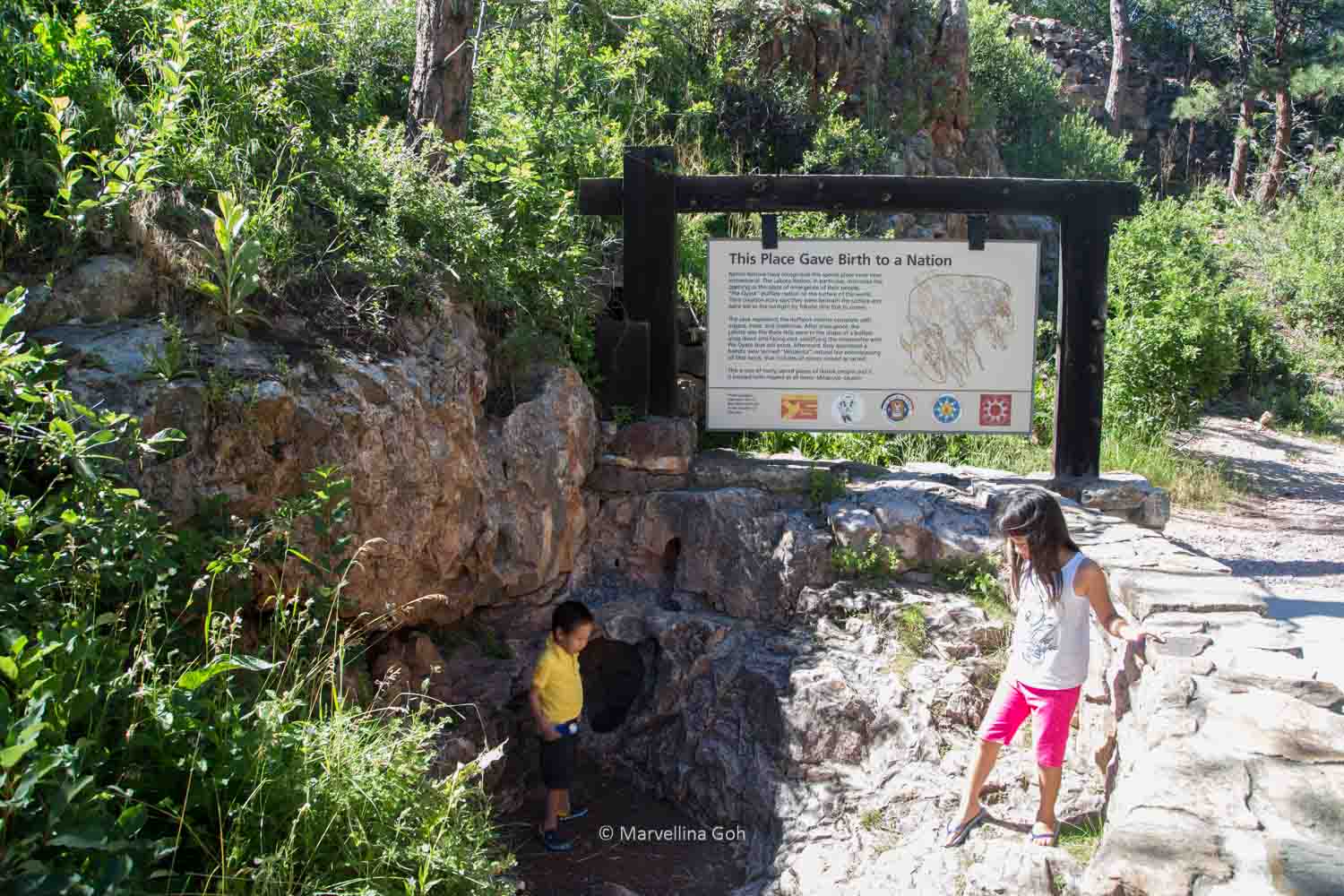 The temperature is around the 50s underground inside the cave. So, you need to bring a light jacket, sweater, or at least wear a long sleeve and comfortable walking close-toed shoes (We wore sandals, short sleeves, and shorts…hey..we are so not prepared!). So, keep that in mind if you want to do the guided tour.

If we ever visited South Dakota again in the future, we will definitely join the guided tours to see all the rare delicate boxwork and jewels-like formations all over the cave.

From the wind cave to drove to the city call Wall to have dinner and to show the kids this little town. I had no photo to share here, not from my camera. I took some photos with my phone.

From the Wall, we drove back to Rapid City to spend the night again and then drove back to Sioux Falls. In between Rapid City and Sioux Falls, we stopped by this place to see prairie dogs. My kids are all over these cute little creatures now. They are very social and not afraid of people. This place allows people to feed the prairie dogs.
Just watch out where you go though, because prairie dogs dig holes everywhere. The hole is where they stay 🙂 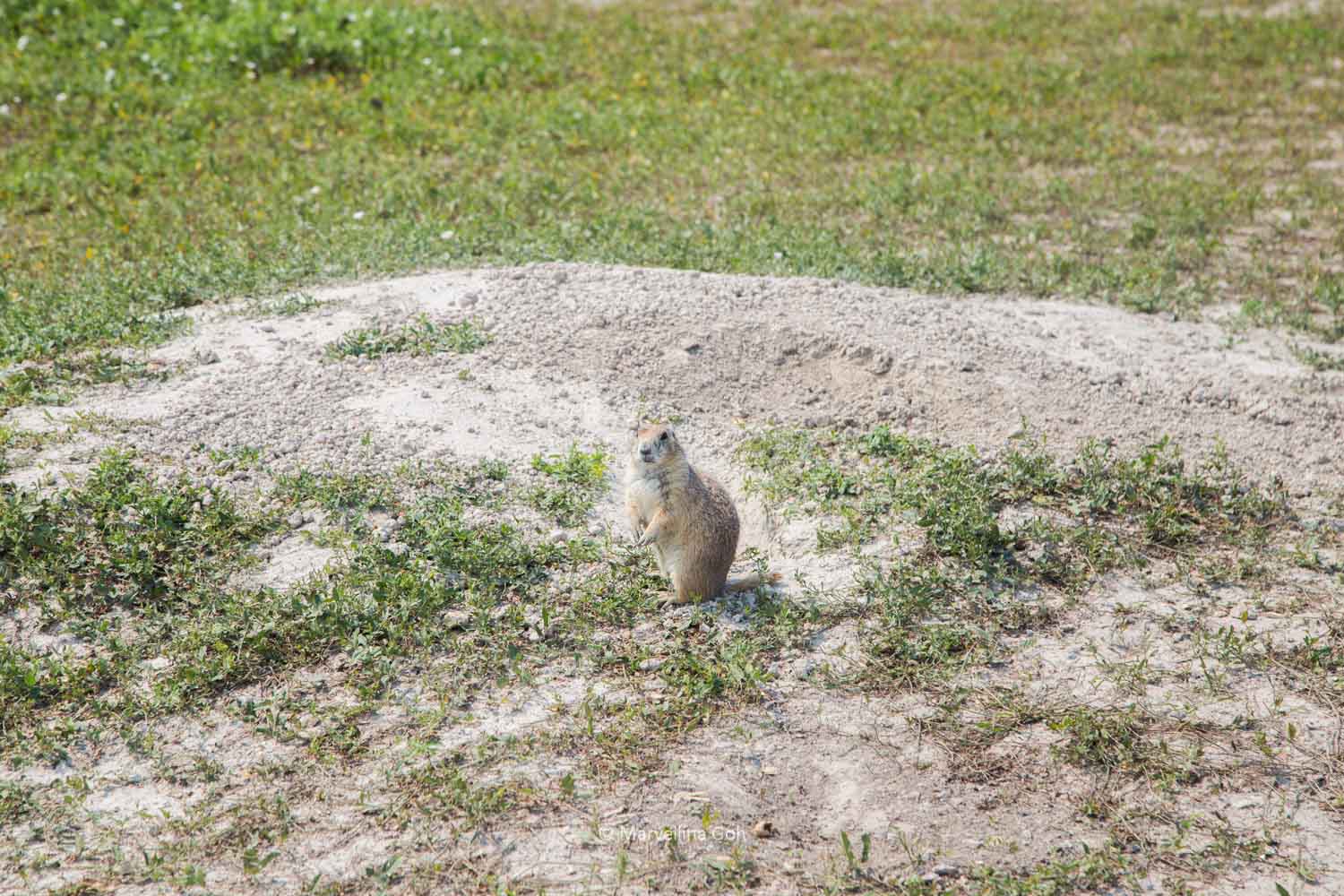 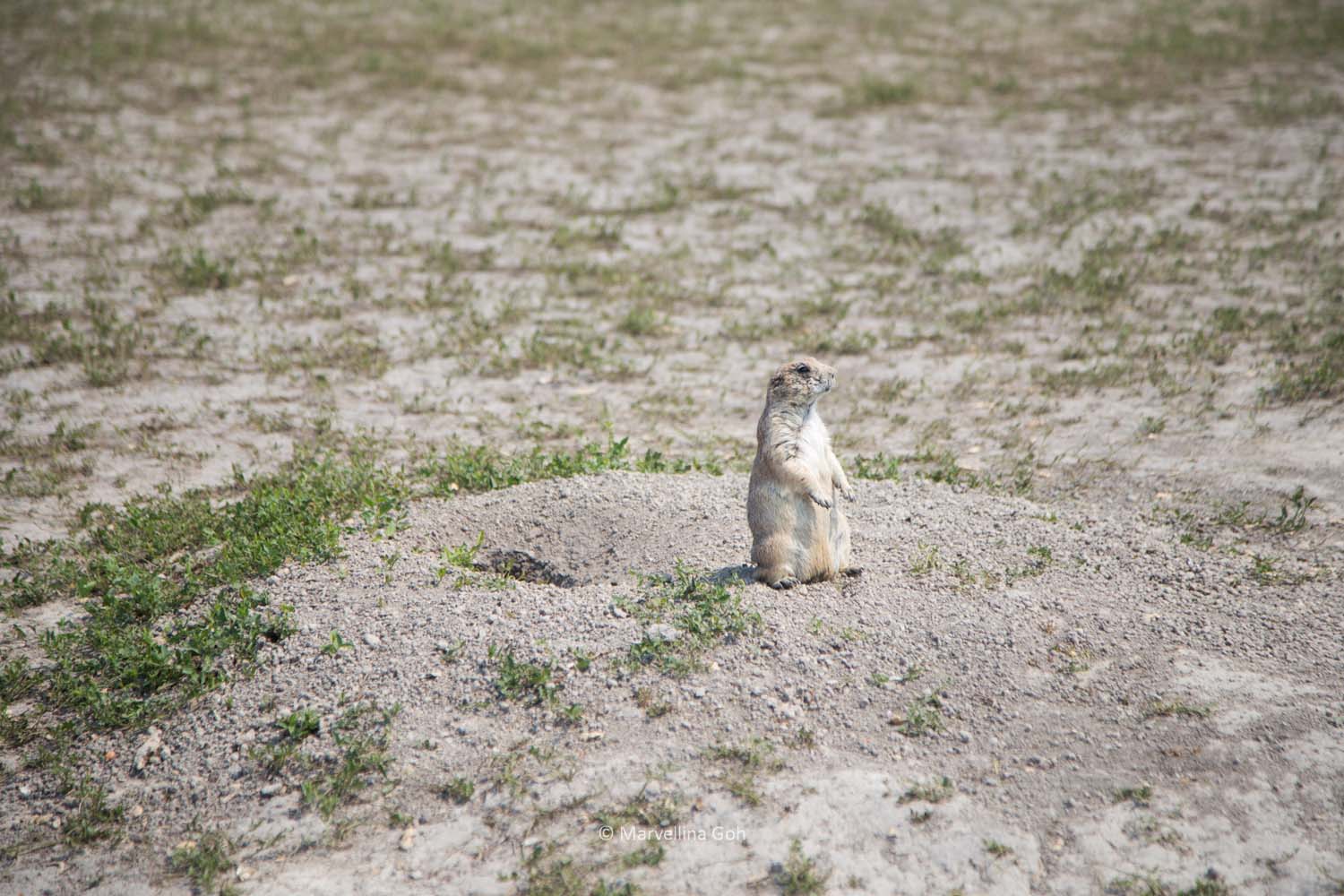 My son was trying to feed the prairie dog a peanut 🙂 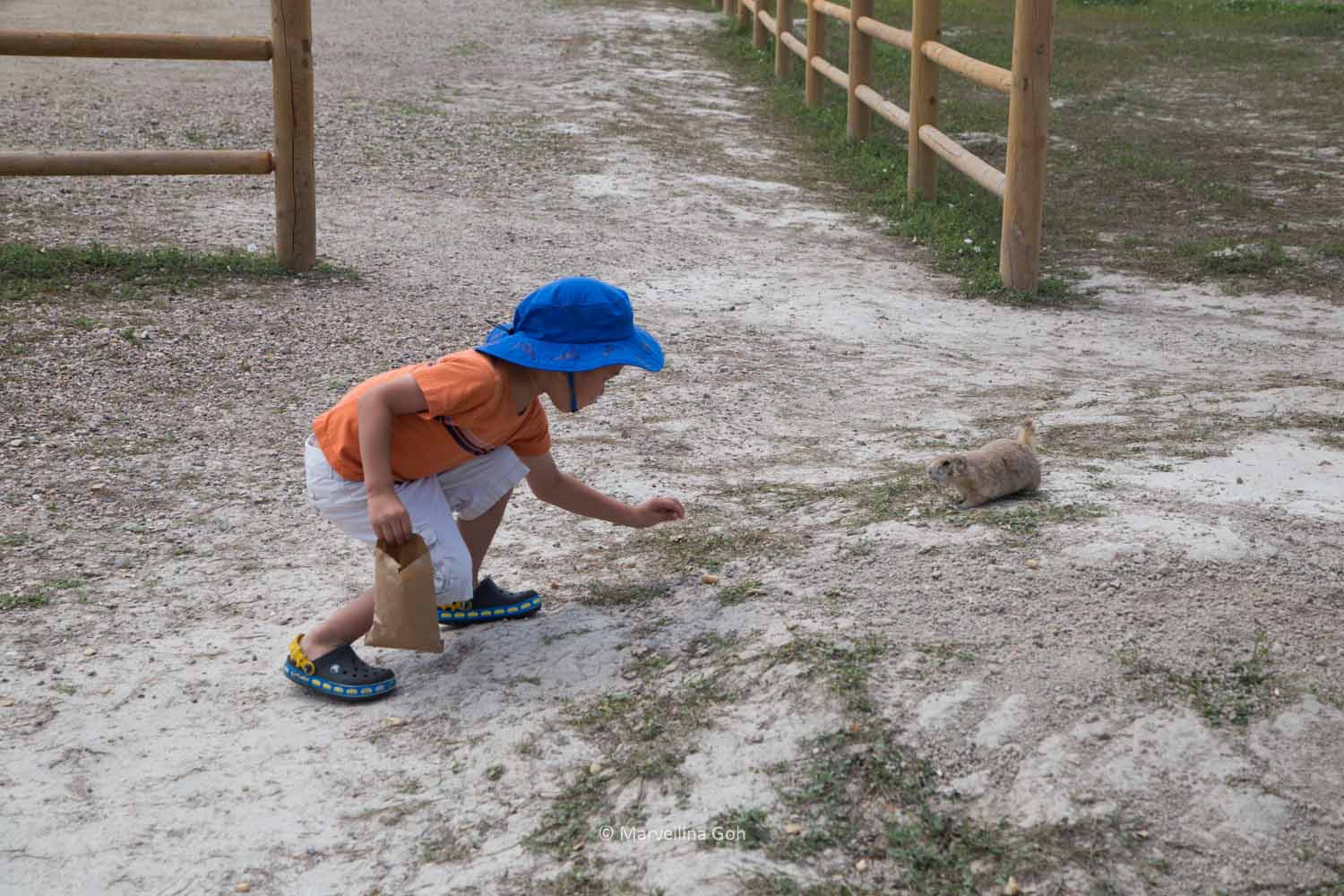 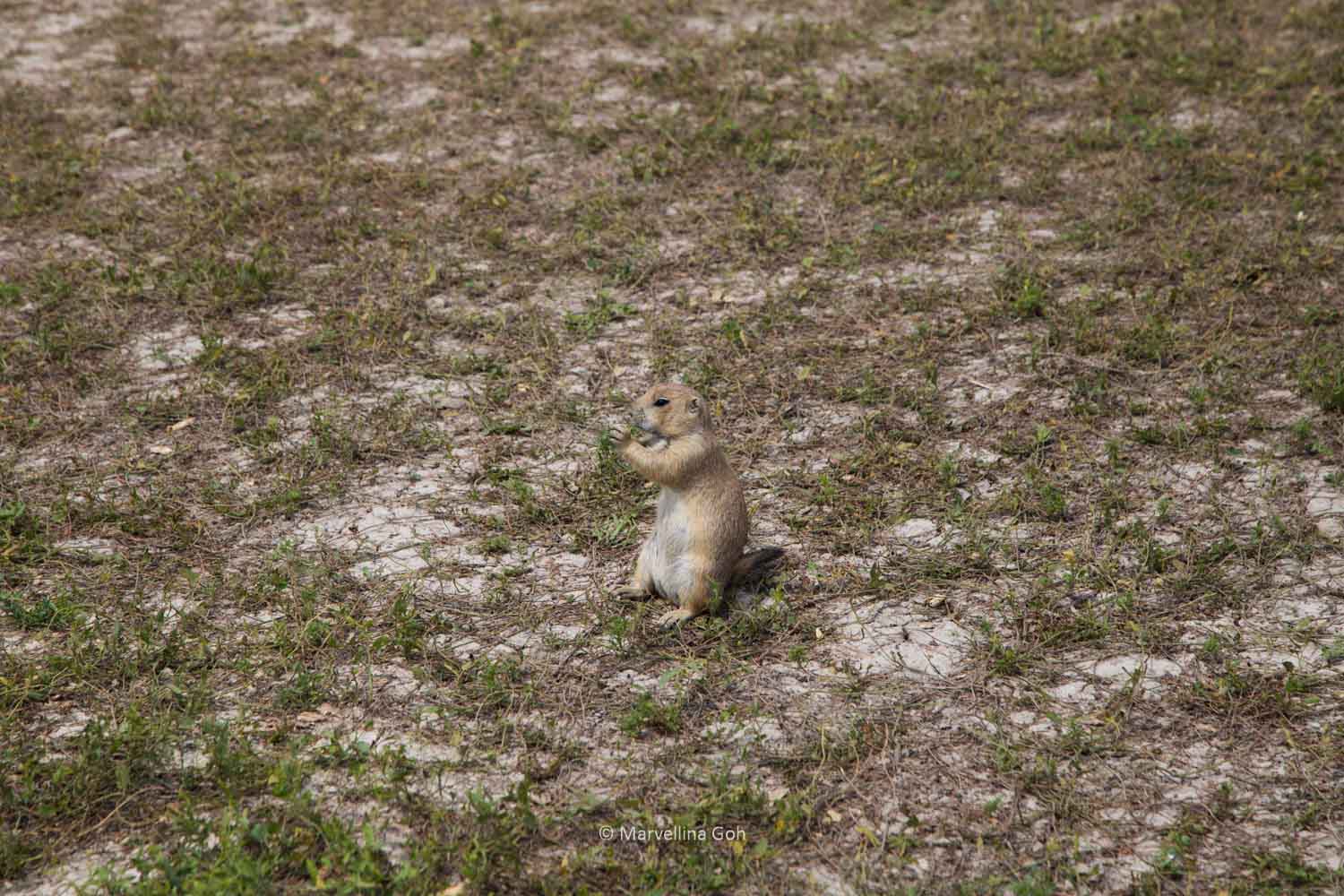 THE CORN PALACE, MITCHELL
We visited the corn palace located at the town calls Mitchell.
It claims to be the world’s only corn palace. The corn palace was originally built as a place for gathering and celebrate fall festival. 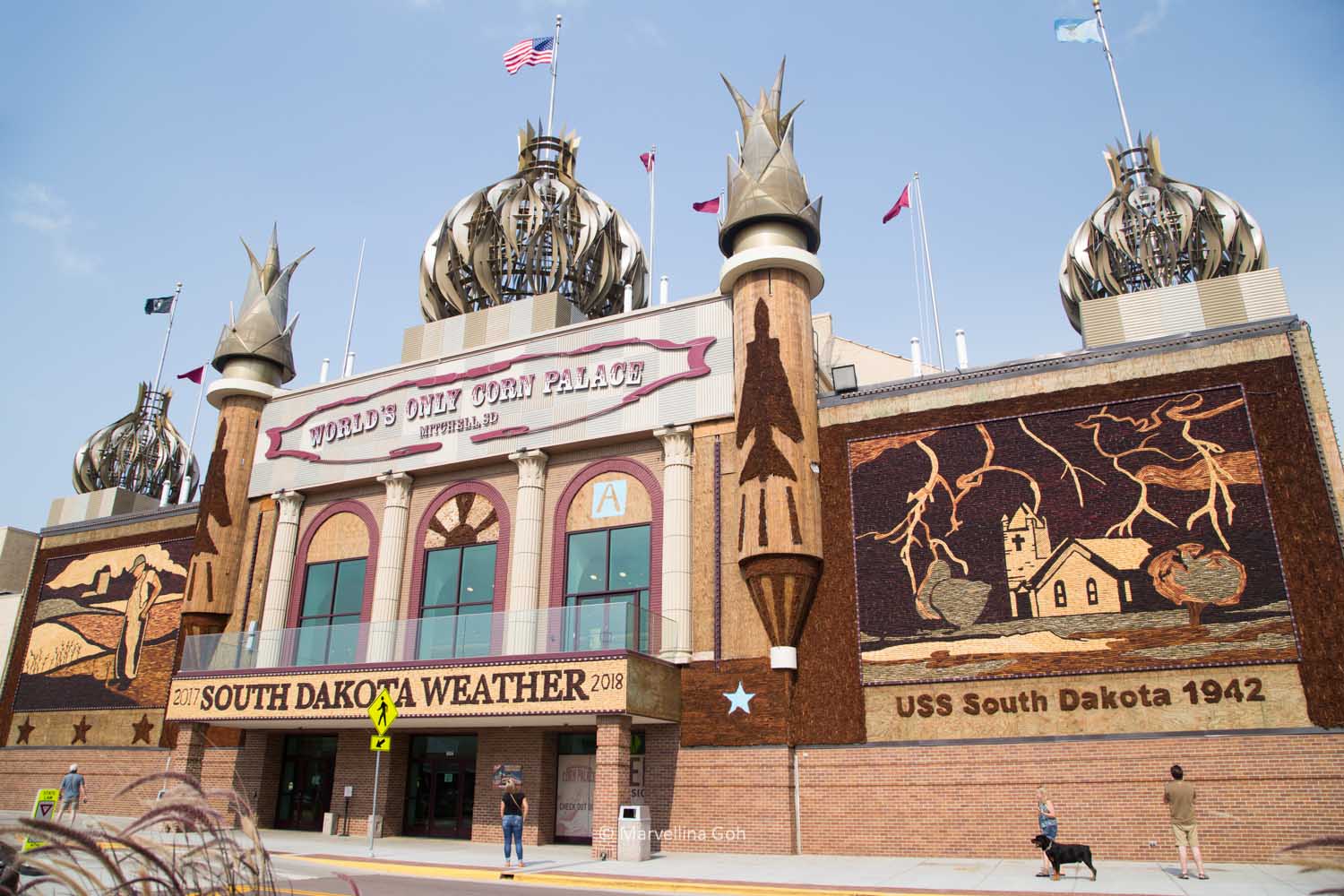 There are still other places that we haven’t gotten a chance to visit in this road trip, but we absolutely loved this South Dakota Family Road Trip. We felt like it’s a great idea to stop at different cities and had a rest instead driving all the way to the badlands and then Mount Rushmore.
I truly enjoyed the calmness, the beautiful prairie, and the rugged beauty of badlands. Have you been to South Dakota? what’s your favorite thing about South Dakota?

You guys are the cutest family! Loved reading about your trip. We went to Rapid City and Custer State Park for spring break, but looking at your pics makes me plan another trip to South Dakota and visit the Badlands. And that water park? I don’t know if my son or I will have more fun. Actually I do:) So happy to see you guys had such a wonderful vacation trip!

We didn’t get a chance to visit Custer State park. We will next round though. We weren’t sure if we wanted to visit the Falls park (with waterfalls) since it was raining on and off, but so glad we did!