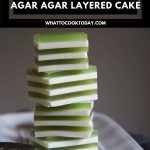 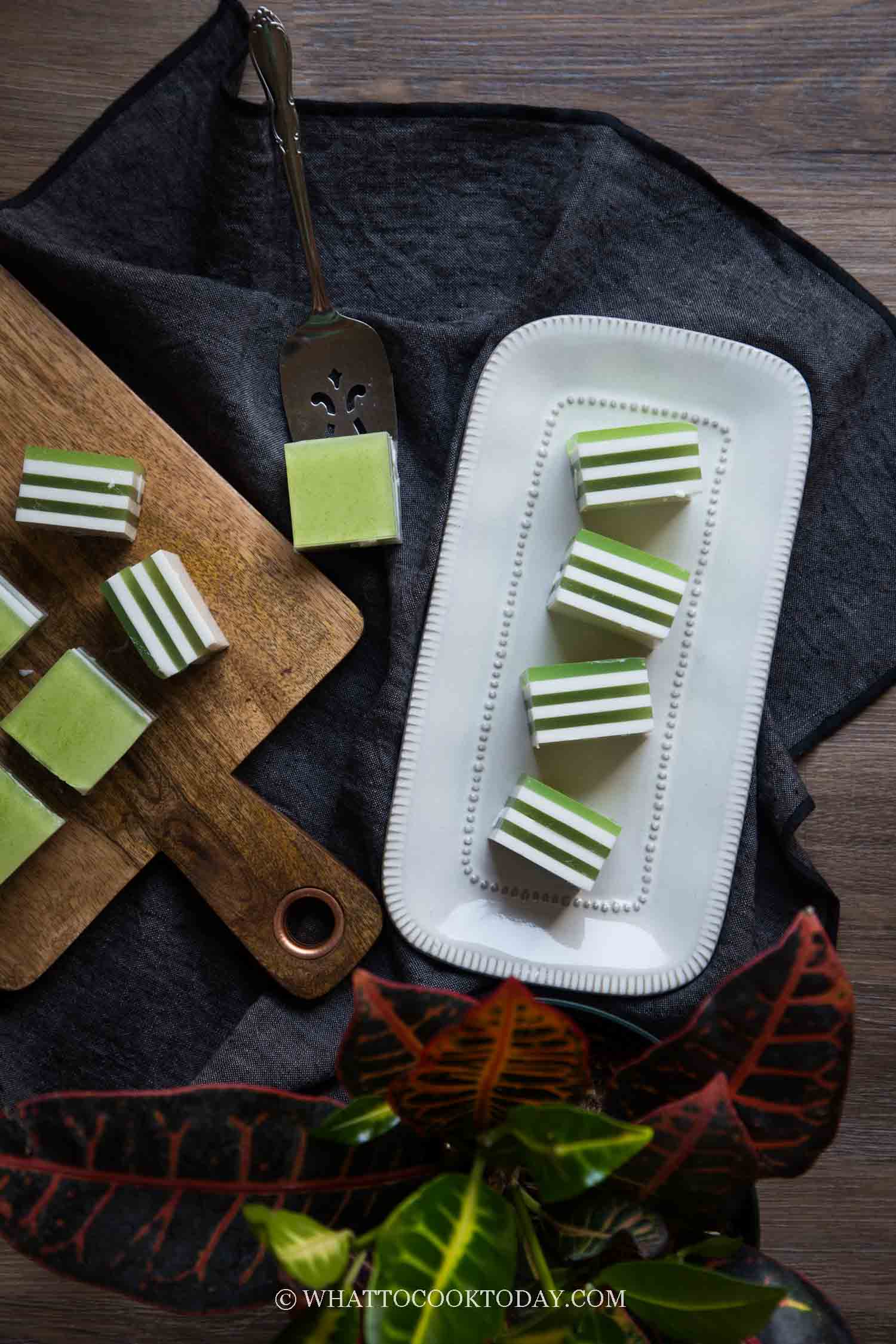 I grew up with mom’s agar agar jelly cake when I was a kid. My mom is totally not a baker, but making agar agar jelly cake was really her forte. She made agar agar jelly cakes with impressive designs like flowers and beautiful pastel layers for us as birthday cakes when we were kids. They were my absolute favorites. This agar agar santan lapis is a much more simplified version, in terms of design, compared to what my mom did, but this is still very tasty and light tasting. Super easy to put together too. 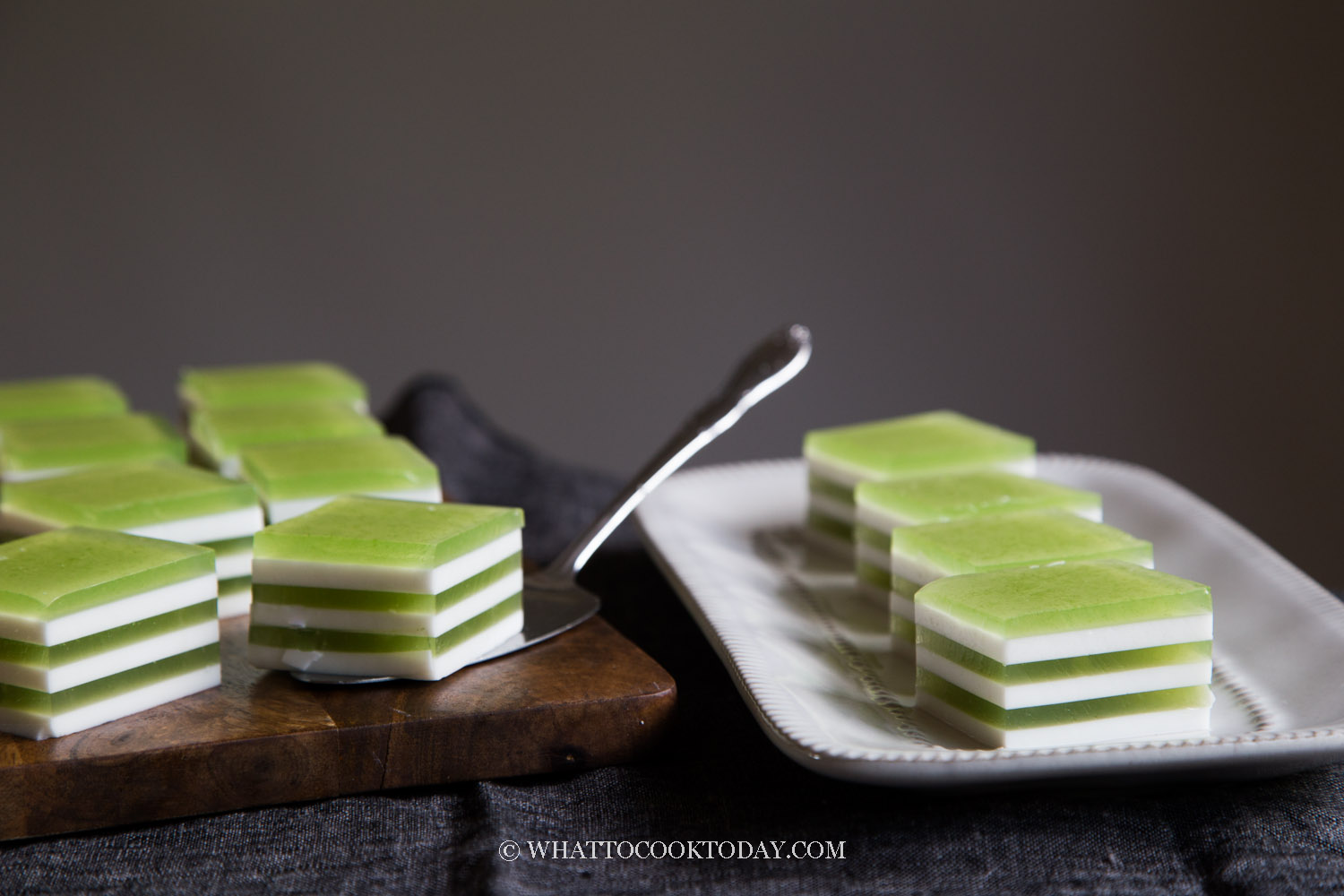 WHAT IS AGAR AGAR

Agar agar is made of algae that can jell liquid substance at room temperature. The word agar agar is of Malay origin but agar agar was first discovered in Japan and has been widely used in the culinary world and also in scientific experiments since then. Agar agar is high in fiber. I remember mom used to make plain agar agar jelly cake (without sugar) to eat as a snack. It’s filling but it’s super low in calorie. It is also a perfect substitute for the animal-based gelatin in cooking.

TYPES OF AGAR AGAR TO USE

If you use agar agar flakes:

If you use agar agar strands:

1. Cut into 1-inch pieces or shorter so you can measure with measuring cup
2. Soak them for 15-20 minutes
3. Put in a liquid you plan to use and bring to a boil and boil until the agar agar dissolves completely

Agar agar santan lapis is one of the popular and easy layered jelly cakes in Indonesia. Santan = coconut milk and Lapis = layers. Coconut milk and pandan juice are cooked with agar agar powder and then pour into a mould and then chill layer by layer to form the beautiful green and white layers. This is much easier to make compared to this Lapis Legit or this Gao Teng Kue. 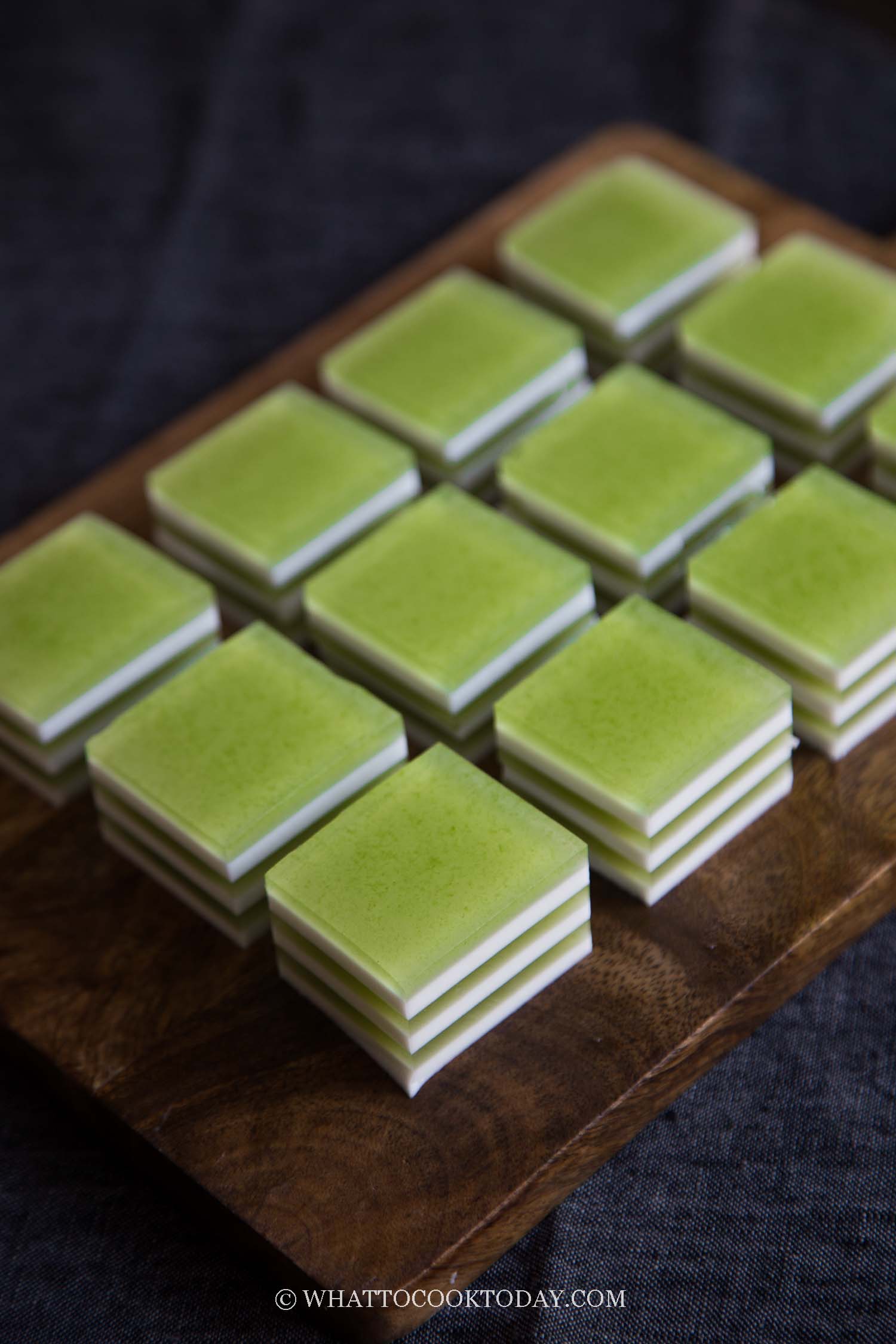 COOK’S TIPS YOU NEED TO KNOW

1. Never dissolve agar agar powder or flakes in hot liquid
They will clump and there’s the end of it. Make sure you stir to dissolve the agar agar before cooking
2. Let the mixture comes to a gentle boil
The agar agar will dissolve completely when it is boiled. But be careful with the coconut milk as we do not want it to come to a rolling boil and turn the coconut milk all foamy and frothy
3. Keep both coconut milk and pandan mixture warm AT ALL TIME
Agar agar will jell at room temperature or once it started to cool down and we don’t want this to happen before we pour the mixture into the mould. So make sure you keep the mixture warm at the lowest heat setting
4. Pop the bubbles
Pop the bubbles with a toothpick. If you don’t, the bubbles will be part of your cake when it solidifies 🙂
5. Make sure each layer has set and pour gently
Before you pour the next layer, make sure the layer beneath is firm enough to hold the next layer and pour the warm layer gently so it won’t “poke” through the layer beneath
6. Chill the cake before serving
Agar agar cake is usually served chilled. After you are done with layering, chill the cake for at least one hour or longer for best result
7. Loosen the edges
Loosen the edges with a sharp thin knife. Place a serving plate on top of the mould and flip over to unmould the cake 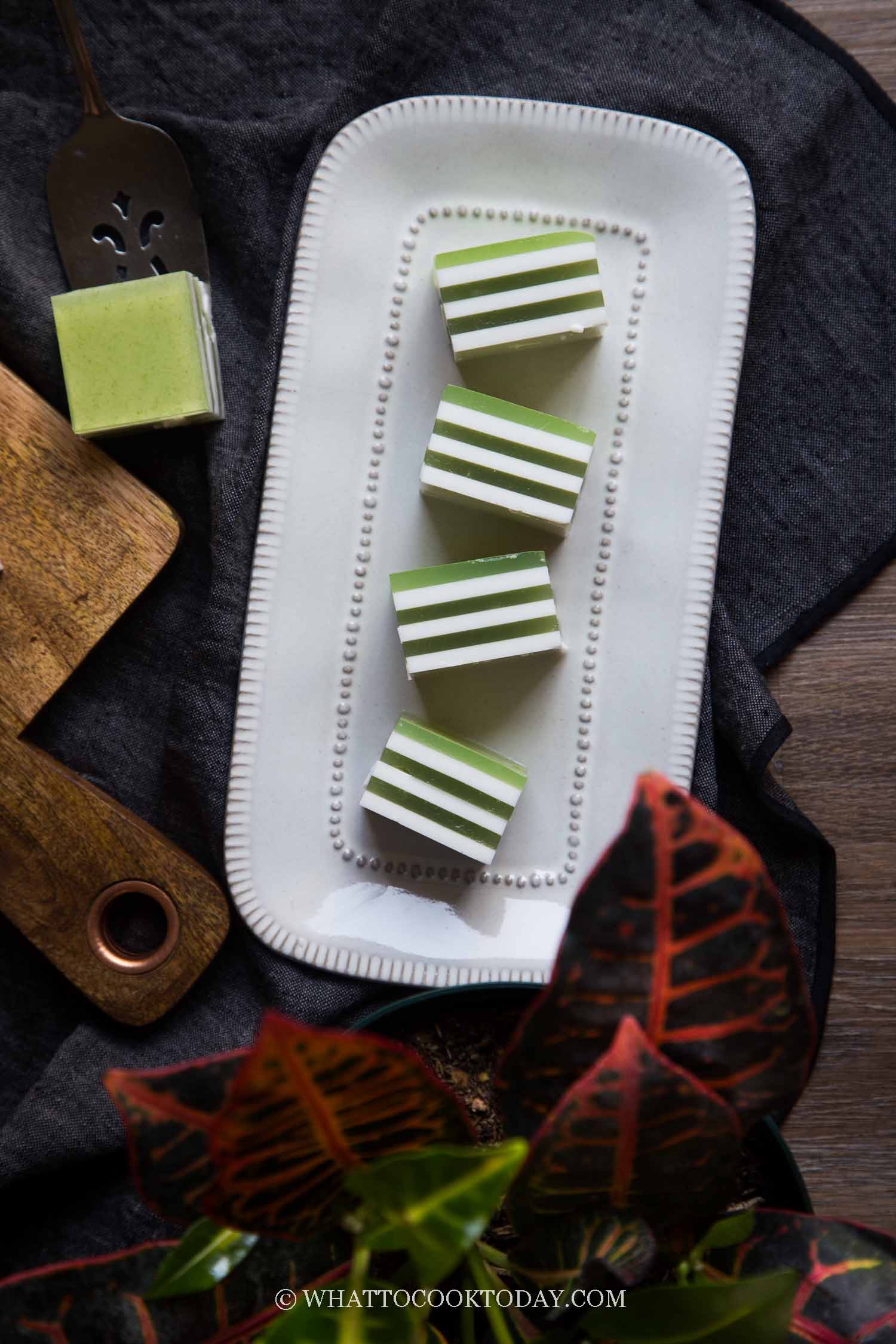 TROUBLESHOOTING: COCONUT LAYER NOT STICKING TO PANDAN LAYER WHEN YOU CUT

It’s not uncommon to have your agar agar layer not sticking to each other and slide around when you cut the cake. The problem is the agar layer has set too solid and it’s cold if you put it in the refrigerator. So when you pour the next layer, the warmth is not enough to “merge” the two layers so they hold on to each other (if that’s making any sense).
I recommend to let them set at room temperature, it will take slightly longer, but you have a lower chance of layers not sticking to each other. If you put it in the fridge to set, just make sure you don’t let it sit in the fridge for too long until it’s solid firm! 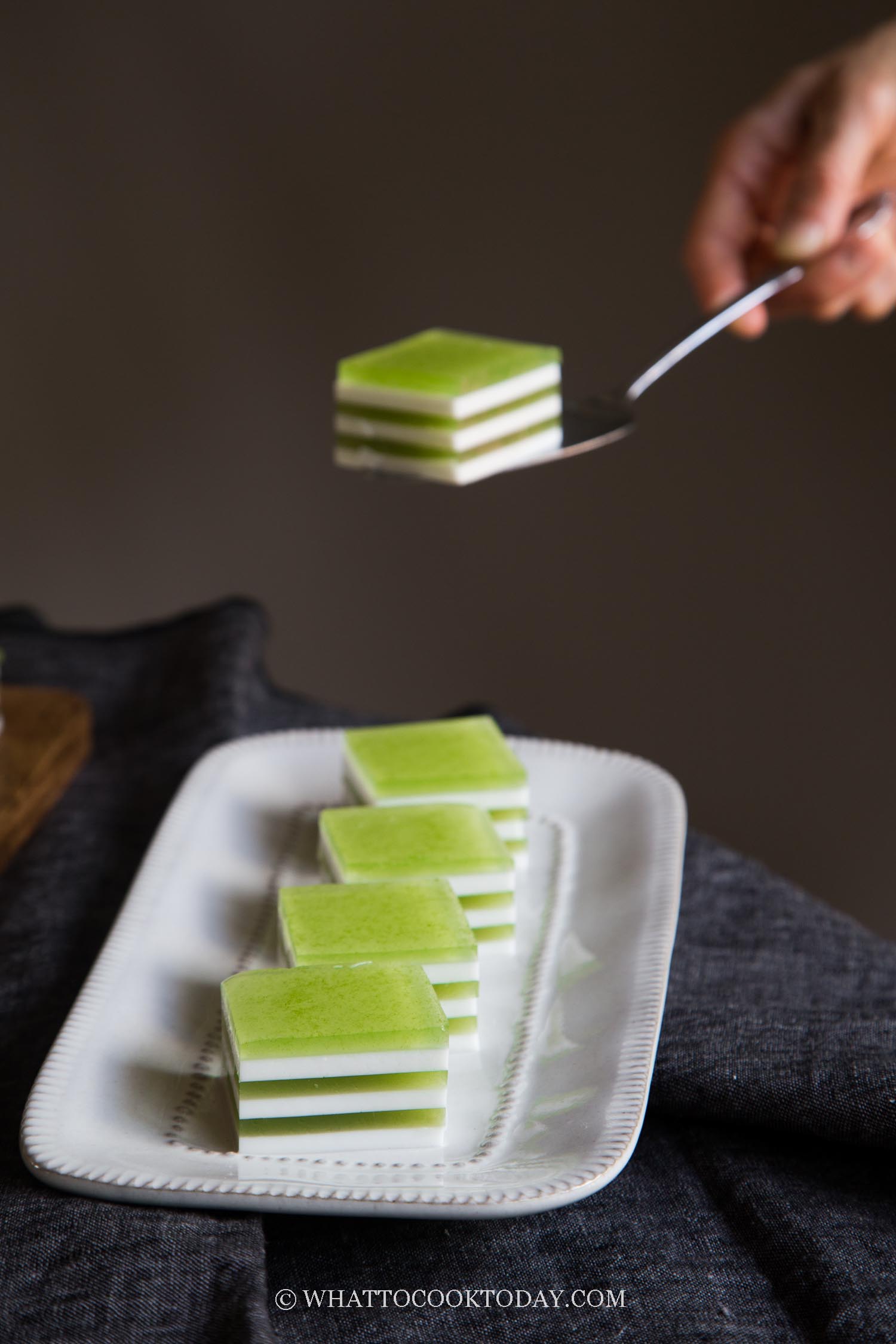 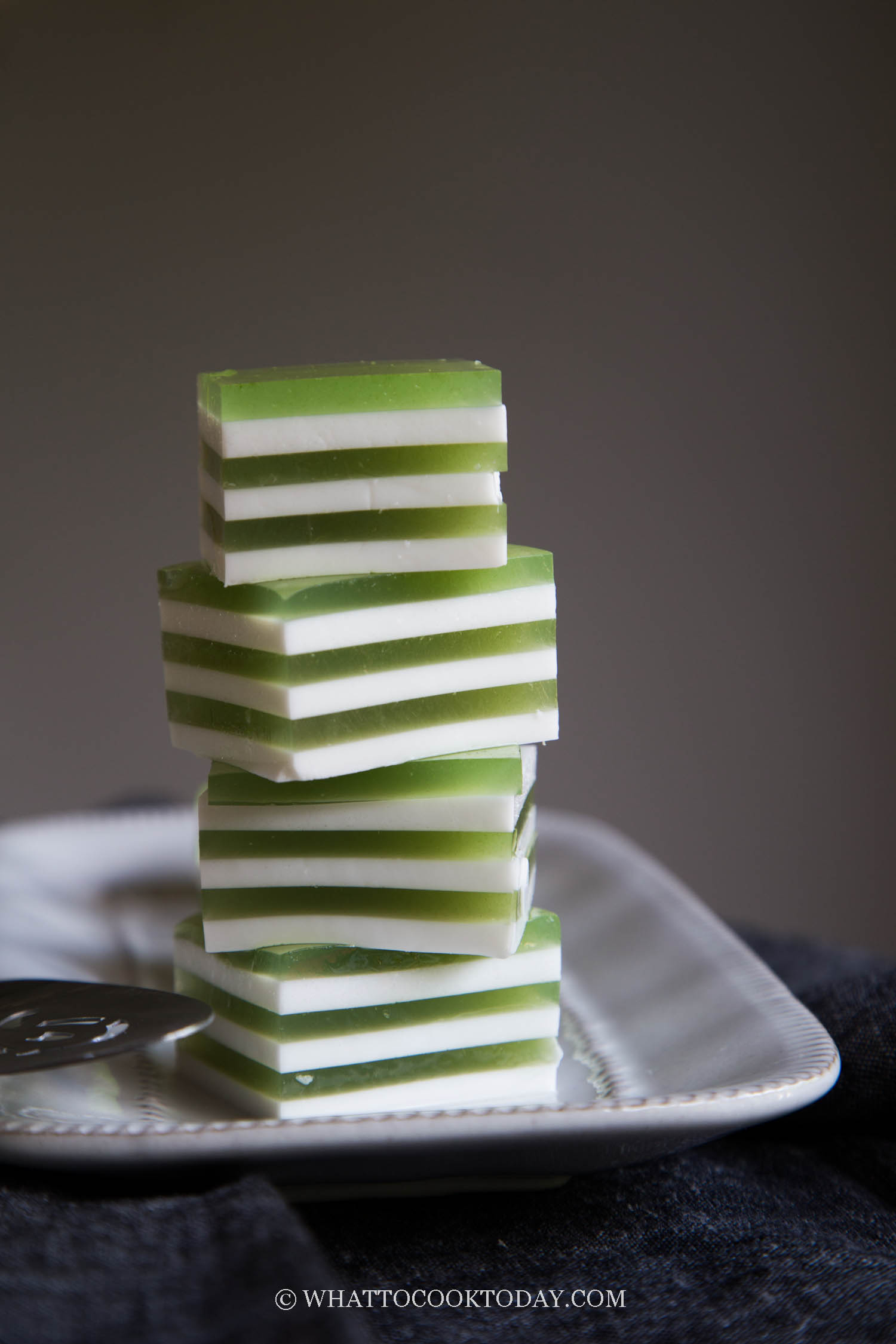 Recipe is improved and updated again on April 22, 2020 to increase the volume of liquid, sugar, and agar agar powder to better fit into the size of pan I mentioned in the recipe. 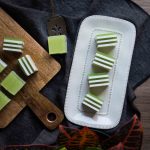 Size of container/mould I use: 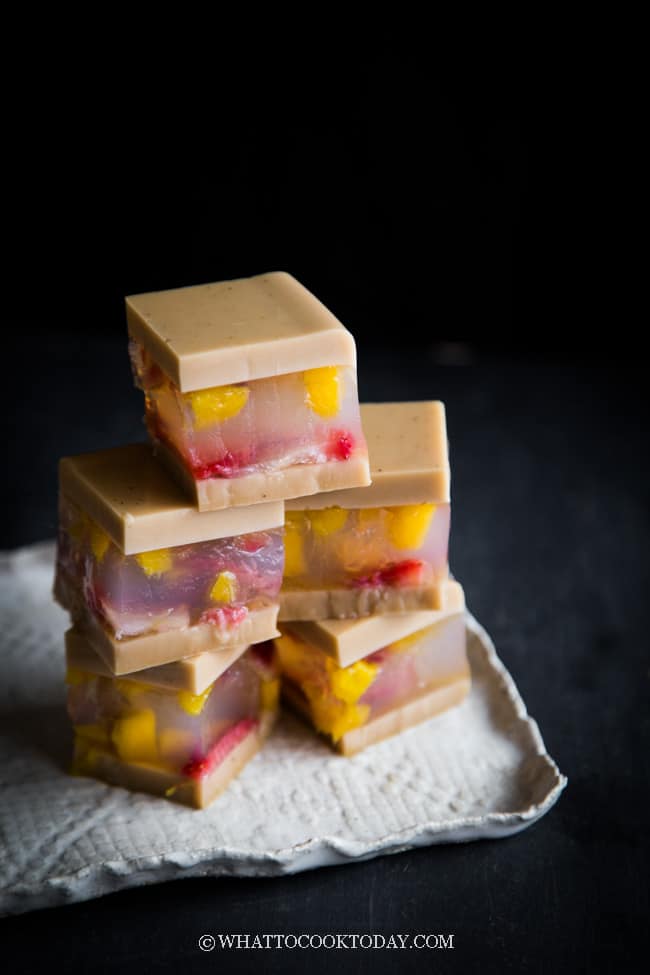 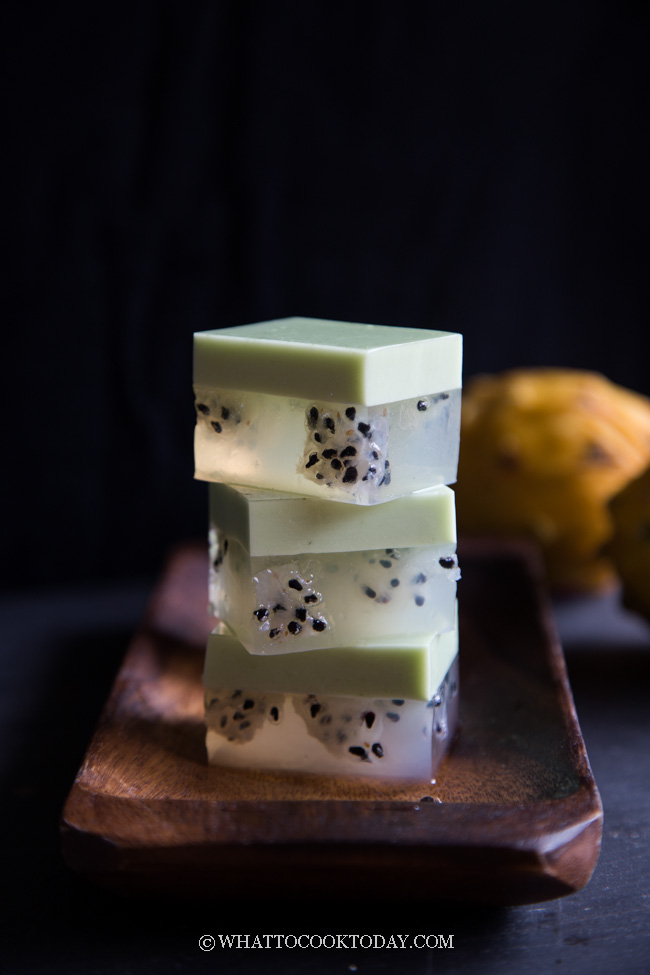 How To Render Lard and Get Crispy Fried...

When will I add the sugar in the pandan layer?

Sorry for the confusion. You add the rest of the ingredients for pandan layer after preparing the pandan juice. I have amended the recipe for clarification.