Home >> HOW TO ? >> HOW TO MAKE ROUGH PUFF PASTRY FOR SWEET AND SAVORY TARTS/TARTLETS I was so tempted to get some store-bought puff pastry to make the Portuguese egg tarts. Really, there’s nothing wrong with that too. I personally think it’s okay to use some short cuts when you want to. I didn’t end up getting the store-bought puff pastry though. I thought I could “learn” how to do it on my own, kinda a challenge for myself. I’m really not a baker. Yes, I’ve said it million times. If I could pull this one off, believe me, you can do it too. It’s really not as intimidating as I thought.

This is a simplified version of puff pastry often called rough puff that I got from Home Baking cookbook by Jeffrey Alford and Naomi Duguid. I love these folks and I have cooked with lots of their recipes and they always work wonder! Even to such a beginner in baking like myself. As mentioned in the cookbook, the traditional puff pastry, a strong dough is folded over layers of butter, then folded and rolled out six times. This results in hundreds of fine layers of dough, separated by the thinnest of layers of butter. When this is baked, the steam given off as the butter melts makes the layer separate and the dough puff up. That’s what we often said “Gosh..how flaky and airy this pastry is”

In rough puff, it started out with a richer basic dough and make fewer folds. The resulting pastry is flaky and puffed, but not as high. Rough puff is great for simple tarts, both sweet and savory. It’s lush to bite into and airy in the mouth and it’s a very useful and practical item to have in the freezer. 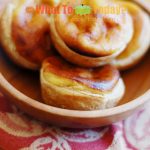 When ready to use it:

Save the trimmings: Assemble side by side to make a patchwork of dough, or dust the trimmings with sugar and bake on a baking sheet for 5-7 minutes at 425 F to make a delicious snack
Tried this recipe?Mention @whattocooktoday or tag #WhatToCookToday
2 comments

How to rehydrate and clean sea cucumber

How To Make Pandan Juice and Pandan Extract

How To Clean Leeks Easily and Properly

How to Rehydrate/Reconstitute Ube Powder

How much total butter in above recipe? 1 stick for dough making then other for Step 5? My 1st step has the dough already a fait accompli!

Hi Linda, somehow the early steps of the recipe instructions were not there after I converted my recipe to a different platform. Anyway, I have updated it accordingly and I hope that helps to clear some confusion.