Leeks is one of my favorite vegetables to cook with. In the same genus with onion and garlic (also my two favorite ingredients to cook with). My mom likes to use leeks in stir-fry noodles, stew, and to make egg omelette. It flavors the dish pretty nicely. This leeks omelette is pretty easy to make and it is quite a common home-cooked dish at our little hometown in Indonesia. 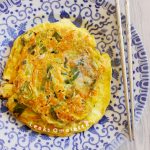