After making the Kazakh Noodles with Laghman sauce, I decided to go ahead and also made another different shape of noodle – Lhasa egg noodle shells. Lhasa is the administrative capital of the Tibet Autonomous Region in the People’s Republic of China and the second most populous city on the Tibetan Plateau. Traditionally, Lhasa cooking doesn’t involve much use of eggs because eggs would have been more of a luxury. According to the Beyond The Great Wall cookbook by Jeffrey Alford and Naomi Duguid, many Tibetans still don’t eat eggs these days.

Making the Lhasa egg noodle shells is just as easy as making other type of noodles I’ve done so far. The ingredients are predictable: flour, egg, water and salt. This noodle is great to serve with any stew of soup dishes. Or you can try the Laghman sauce with it. Delicioso. 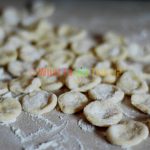