Chicken pulau with pumpkin is a dish of celebration in the oases of western China. This dish is special to the Uighur people who also share this dish with their close cousins the Uzbeks. Rice is not an everyday foods in that part of China as it is more challenging to grow rice in the desert or uncultivatable land.

In case you are wondering who are the Uighur (Uygurs) people, they are a Turkic people whose language is related to Uzbek, Kirghiz, and Kazakh. According to the Beyond The Great Wall cookbook by Jeffrey Alford and Naomi Duguid, the Uighur people are the majority of non-Han population in Xinjiang, China. Uighurs have been an important culture in this part of the world since well before the 18th century. When Genghis Kan took control of a large chunk of Central Asia in the 13th century, it was Uighur scribes that he relied upon to develp a system for writing and keeping accounts. Although the Uighur scrips is still the Mongolian alphabet, the Uighur language is now written in a modified Arabic script.

Prior to the 10th century, Buddhism, Nestorian Christianity, Manicheaism, and Animism were all practices in Xinjiang, but int the 10th to 12th centuries, Uighurs converted to Islam, and they are no primarily Sunni Muslims.

Everyday foods in the oases are mainly tea and bread. The breads are leavened flatbreads of various kinds, called nan and baked in tandoor ovens, like those in India. For feasting and special occasions, the main dish is pulau, rice flavored with meat and vegetables and served on a large platter, family-style. The pulau idea seems to have spread out from the sophisticated cuisine of Persia, radiating east along the Silk Road and west into Arab-held lands, and eventually through the Arabs to Spain, where it becomes Paella.

In Uighur hands, pulau is cooked in a q’azan, a wide shallow wok-like pan. As in paella or risotto, the flavor base cooks first, in oil, then water is added to make a broth. The rice is then added and cooks in the broth to absorb all the flavor. I really enjoyed this dish. It’s a one-pot dish, which I like. It is also very comforting and fulfilling at the same time. 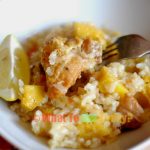