Want to start your morning right ? well, Dutch baby will do just that for you. I’ve heard of Dutch baby (Pannekoeken) before but I never tried it. My husband came home with a recipe of Pannekoeken one night. The recipe is from a friend at work (Thank you Marianne Hagen) and the moment I saw the picture of the puffy pancake, I just thought it’s a sin not to try it. I can’t tell you how good it smelled when the pancake was baking in the oven. I wished I could bottle it up as a perfume and used it as a spray to replace the febreeze we’re using. I was anxiously peeking through the glass of the oven door to watch the pancake puffed up 🙂 I actually got all my props ready for photographing before the pancake was ready because I wanted to be able to just sink my teeth on this as soon as it was out of the oven. Mission accomplished. The Pannekoeken + the sauteed apple are just heavenly!! Thank you Marianne. Now, I know how good Dutch baby is 😉

Shown here is baked in 12″ Cast-iron skillet by Victoria Cookware. I love baking and cooking with this high-quality skillet. 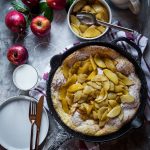 Ooopsss, i’m so sorry for leaving that out. Thanks for letting me know. I’ll update soon. It’s 400F and bake for 20 minutes or longer depending on your oven.