Consuming ginseng has been part of the Asian culture, especially East of Asia, for centuries now. Ginseng or known as “Ren Shen” in Chinese, is highly regarded in Asia because they believe in its “tonic” property. Ren Shen resembles a people if you take a look at it :), hence the name. Ren means human, Shen means plant root.

In the modern days now, you see ginseng extract in many energy drinks, even coffee and tea. My mom asked me to cook soup with Chinese herbs once a month for tonic purpose. Honestly, I don’t truly understand Traditional Chinese Medicine (TCM) and the benefits. Unlike the Western medicine, they aren’t well-researched and not many scientific documentation about the Chinese herbs. But, I grew up with my mom preparing soups using Chinese herbs. When we were sick, mom often resorted to TCM instead of the Western medicine. TCM is getting more popular again these days as more and more people want to seek alternative medicine and more natural treatment. 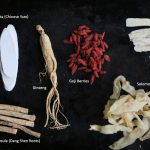 Chinese herbs (rinse all the herbs with water before using): This soup looks so comforting, and delicious! I’d love a bowlful right about now! 🙂