I have so much pumpkin puree stash in my freezer and the cravings for these traditional ang kue gave birth to these version of pumpkin ang ku kue.

WHAT IS ANG KU KUE?

Ang means red in Hokkian dialect. Ku means tortoise. Kue means cake (it’s a very broad term as it covers from the cream frosted cake to steamed cake like this and anything in between). Traditionally ang ku kue is made red in color (The Chinese loves red). It is named as such because of its shape that resembles tortoise.

WHY YOU WOULD LIKE THIS ANG KU KUE RECIPE?

My mom’s recipe is really easy and no fuss. The recipe doesn’t call for sweet potato and cooking the dough first or anything like that. And I must say it’s pretty fool-proof (or I should say me-proof because I suck at things like this but I did it!). Traditionally also made with mung bean fillings, but I like the peanuts fillings and mom told me her lazy shortcut to make the peanut fillings, only 2 ingredients required for the fillings and no cooking either! WINNER!

HOW TO CHOOSE MOLD FOR ANG KU KUEH?

1. Wood or Plastic
There are wooden and plastic molds available. My mom brought me one wooden mold and one made of plastic. I prefer the wooden one as it gives a better imprints on the cake.

2. Deep or shallow
Definitely go for deep. I like a deep mold because the ang ku kueh will appear taller. I know some people prefer shallow one because it is easier to get the dough out, but the recipe for this dough is very easy to work with. I got this Wilton Food Writer Edible Color Markers

in various color that I used to make this red dot on top of the ang ku kue before steaming them. Like I said, the Chinese couldn’t get enough red 🙂 And I’m just loving this tea pot I got form a thrift shop! Made in Japan too! Such a perfect companion for food styling and that afternoon tea 😉 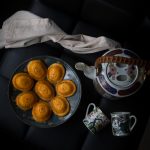 HI Marvellina. May I know why add hot boiling water into the Glutinous rice flour dough? What’s the science behind it? TQ
AliceNiki

It helps to “cook” the dough, which turns it really elastic and doesn’t break easily. The heat make the dough all stretchy and elastic. You can try with or without hot water and you will see the difference. The one without hot water is more difficult to work with 🙂

I’m a little confused about this as you don’t say what to do with pumpkin purée and you mention hot pandas juice but it’s not in the ingredient list.

So sorry for the confusion. That’s what happened when I typed 3 different ang ku kueh recipes on the same day, one after another! Anyways, it should be a pumpkin puree, not the pandan juice. I’ve corrected it. Thank you so much for letting me know!

These mini cakes looks so interesting