Things were much more simpler when all Fiorina ate, or perhaps I should say drank, was breastmilk. Afterall, there’s only one thing on the menu 😉
Now, I’m trying to keep her food palatable and hope that she would eat them. The girl refused to eat pureed baby food. Whatever stage 1, stage 2 or stage 3, she hated it. She would take it when she was 6-month old. However, ever since she turned 7 month-old, I swear to God, I couldn’t get her to open her mouth unless she was allowed to feed herself. BINGO…isn’t that one of the signs that she’s ready for finger food ? Yes, my dear. She’s ready. She didn’t eat much because most of the food were on the floor you see. However, that’s how babies learn. Now, she’s almost 9 month-old and she wants what we’re eating. AHA…isn’t that another signs that she’s ready for table food ? Ditto! The girls is toothless but she is fearless. She can gum anything to death if you allow her to. Her palate has indeed developed more and she knows how to enjoy herbs and spices (perhaps tastes familiar to her. She’s still a boob baby!). I do let her eat some of our table food, however, I’m trying to tone down on the salt and sugar.

So, I’ve been borrowing some cookbooks for babies. Sure, like I don’t have enough cookbooks piling on my desk already! The girl gotta eat too you know.
So, I saw this Rosemary Bread Sticks recipe on Feeding Baby cookbook by Joachim Splichal and Christine Splichal. It’s a beautiful cookbook and delicious recipes for babies. Even I like how the food turned out and tasted. I actually did not put any salt in this recipe, but I put a little bit of parmesan cheese. It is a perfect finger food for her and great accompaniment for us with a bowl of soup to dip in. Just make sure you roll it thin enough so it won’t be a chocking hazard for your babies. I never leave her unsupervised whenever she eats. I’m still a bit nervous about the whole chocking thing, though it has never happened and I hope it never will. 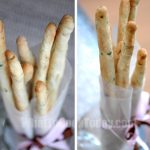 Apple pie with pecans and raspberry sauce in...