It had always been my dream since I was little, I can’t remember how little, but perhaps old enough to understand certain things and old enough to have dreams, to travel to Switzerland. Why Switzerland ? well, I always think it is such a peaceful country (it’s hardly ever on the news) with spectacular scenery. I did make it happened about two years ago. We traveled to central Europe with my sister and Switzerland (Geneva, Lucerne, Interlaken and Zermatt) was in the itinerary. I had to admit that majority of the photos were taken in those four places in Switzerland than anywhere else we went to. I didn’t get much exposure to the food though. You know how it’s like when you are on a tour, it’s always rush..rush..rush..The only thing I remember having were the Swiss fondue and some kind of sausage.
So, here I am now, exploring the culinary part of Switzerland from our kitchen. From what I read from the Taste of Switzerland by Sue Style, Swiss cooking has strong of influence from its neighboring countries like German, Italian and French. I found Swiss cooking was quite simple and often involved, of course, cheese, and potatoes. Rosti was the first dish I chose to make. According to Sue Style, this is the quintessential Swiss-German dish, a bit like hash browns but crustier. This was used to be a breakfast food eaten all over Switzerland. However, this has been replaced by Muesli.

Rosti is made from boiled potatoes that are made the night before and then peeled, grated and pan-fried until golden brown. It is very essential to use waxy potatoes like red potatoes and fingerling potatoes.
I have always a big fan of hash brown. That was also the reason why I used to go to Mc. Donald’s back in college time during breakfast time – for their hash browns. This version is much healthier though, they are not deep-fried. I like how crusty and crunchy it is. 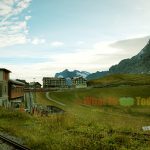